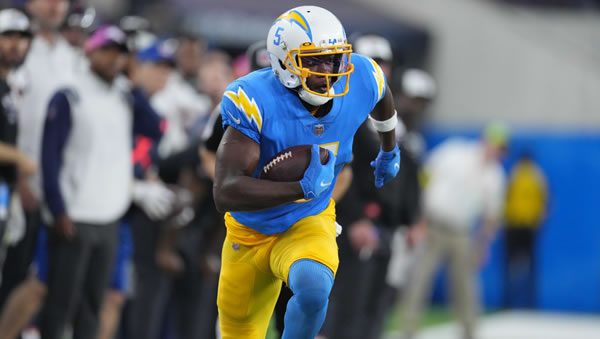 Point Spread: TEN +3/LAC -3 (WagerWeb – You can make the Titans a +23 underdog or the Bolts a +17 underdog by inserting either into a massive 20 point NFL teaser at Wagerweb Sportsbook!)

The Tennessee Titans come to Inglewood on Sunday for a week 15 AFC face-off with the Los Angeles Chargers at SoFi Stadium. The Chargers were able to creep over the .500 mark last week and give their wild-card case some credence with a nice SNF win over Miami, 23-17. Hoping that sparks a run, the Bolts host a Titans team that will be gunning hard for a win. Following a season low-point on Sunday where they dropped a must-win game at home, 36-22, to Jacksonville, the Titans are now at 7-6, losers of three straight and in need of a season-saving win. Who can win this high-stakes battle on Sunday?

Getting outscored 71-33 the last two weeks at the most crucial point of the season spells out a gloomy reality for the Titans. The shortcomings on that defense are really starting to surface. And finding realistic production outside of Derrick Henry is becoming a dicey proposition. The recent form of tight end Chig Okonkwo is promising, and I’m sure Treylon Burks (questionable) will be something someday. But without AJ Brown, they lack that realistic second option to keep defenses honest. Robert Woods has been a flop this season. Guys from the aerial corps might step up at some point, but with it not happening now, this offense is stuck in the mud. Ryan Tannehill has just 13 TDs through the air, and it’s been a real grind at times.

The Chargers have been having trouble running the ball all season. That’s what the Titans do best on defense, and it might not resonate this week against a team that doesn’t use Austin Ekeler traditionally. It might make the Chargers more one-dimensional, but that dimension is a potent one, and the Bolts will be wielding it on a Titans’ secondary that is really in the dumps. Watching it bottom out the last two weeks is disconcerting, and with Justin Herbert slinging it to a receiver crew that is now relatively healthy, one wonders how that’s going to look this week at SoFi.

We saw Derrick Henry cranking it up last week, eventually scripted out of the game with the Jags taking a big lead. But we started to see some of that dominating running that has characterized Henry’s late-season performances before missing last season’s second half. Unless the Chargers pile on so many points that the Titans are forced to air it out, it’s hard to not imagine Henry feasting on a Chargers’ run-defense that is really hurting. There have been times when the better backs they faced ran them over with little resistance, and Henry compares favorably to the backs that have gone off on the Bolts this season.

At 7-6, it’s not like the Chargers have an air of reliability. Things can really go off the rails for a team many fancied to give the Chiefs a run in the AFC West this season. A midseason slump threatened to send them into the rocks, with a nice win on Sunday night stopping the bleeding. But just as the Chargers offer a good sign, they recede. The defense lets them down. Someone gets injured. They’ve had a lot of issues. Some of those look to be turning their way on offense, but will the drop-off on a defense that has absorbed a lot of loss cost them this week against Henry and the Titans?

You almost start to wonder if the Titans’ ultra-reliance on Henry will cost them. One might say it already is, with this three-game losing streak being evidence. Defenses can really start to concentrate only on Henry and make the Titans beat them another way. Not that this hasn’t been the case all season, yet Henry can thrive even when the box is stacked against him. I’m just not sure it has ever been as heavy as it is now, with the supporting cast offering little but a spike performance here and there or a sporadic big play in a given game. Will the superior Chargers’ offensive firepower and more spelled-out roles, and proven contributors be too much to overcome?

This might just come down to the Chargers’ aerial-attack against the Titans’ run-game and, namely, Derrick Henry. Both aspects of that matchup are facing appetizing matchups this week. If the Chargers are dialed in, the thought of them being at home, with Herbert connecting with Mike Williams, Keenan Allen, Austin Ekeler, Josh Palmer, and Gerald Everett, is a daunting proposition for Titans’ backers. But then the mind remembers all those December afternoons we saw Henry go nuts, and you can’t help but think that’s something that can happen this week against this Chargers’ shoddy run-defense.

The menace of Henry looms like a dark cloud over the Chargers this week. I just think the sheer volume and the variety of the Chargers’ attack will resonate this week to a slightly-greater extent. Not that one player can’t blow this apart, as Henry has shown. But with the poor Titans’ pass-defense, the Chargers will be wielding a budding young QB in Herbert, along with a gaggle of aerial talent of all different types—slot receivers, edge guys, a tight end, and a pass-catching back of the highest order. Ultimately, I see it being enough to get them over the hump. I’ll take the Chargers in this one.

Loot’s Prediction to Cover the Point Spread: I’m betting on the Los Angeles Chargers minus 3 points. Bet your Week 15 NFL predictions for FREE by scoring a 100% real cash bonus up to $500 when you use bonus code PREDICTEM at Betnow Sportsbook!