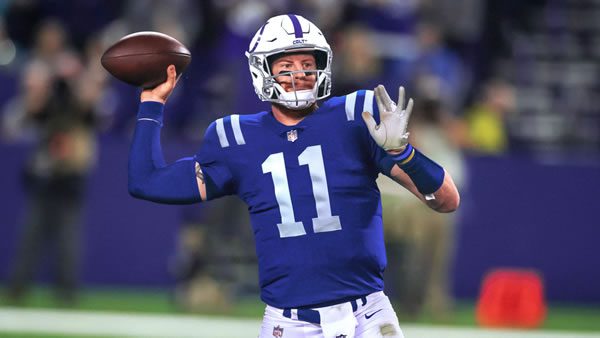 The Tennessee Titans travel to Indianapolis for a Halloween clash with the Colts. Both of these teams have been playing good ball and covering spreads and betting sites has made the Titans 1 point road favorites and set the game total at 51. I’m riding with the Colts to win the game and cash tickets for their backers. Here are three reasons.

Indy’s Offense Is Firing on All Cylinders

Indy opened the season with a bevy of injuries on the offensive side of the ball but are finally close to 100%, and their performance has improved with their health. Early in the season, Carson Wentz looked like 2020 Wentz rather than the 2017 Wentz we were promised coach Frank Reich would deliver this year. But in the last four weeks, Wentz has eight touchdowns and hasn’t thrown a pick. During that time, the Colts have won 3 games by a combined 51 points and suffered an overtime loss to the Ravens. Jonathan Taylor has been the best running back in the league, not named Derrick Henry. Taylor is averaging 5.5 yards per carry and has reached the endzone five times. Michael Pittman Jr. is Wentz’s favorite target averaging 72 yards over the last four contests and scoring twice. Reich has the offense humming over the past month. They have played some easy defenses, but they have a great balance with their running game, play-action passing, and mixing in a deep pass, especially if T.Y. Hilton is on the field as he should be. Indy can attack the whole field, which should cause some issues for the Titans this week

Tennessee’s defense was atrocious early in the year but have come on in the last few weeks. Last week they held Patrick Mahomes and the Chiefs to three points and forced three turnovers along the way. Though that was a great effort, the Chiefs are obviously a team that has some issues all of a sudden. But the two previous weeks, this defense gave up 417 and 454 yards to the Bills and the Jacksonville Jaguars, so they can be had. Tennessee is 25th in the league in opponents yards per play and also 25th in opponents rushing yards allowed per attempt. KC made no attempt to run the ball last week, and the Titans could sit back and play the pass, this week, they will have to stop Taylor and cover the play-action pass. The strength of the Titans defense might be their pass rush, led by Harold Landry with 7.5 sacks, but that will be a strength against strength match-up as the Colts still have a great offensive line. We should believe holding the Chiefs to 3 points was more of an issue with Chiefs than thinking the Titans have figured out the D and expect something more as we saw in the Buffalo or Jacksonville games. Indy’s offense should have a lot of success Sunday.

How Can the Titan Attack Be Stopped?

There is no reason for me to expound on the greatness of Derrick Henry. He is the most imposing offensive player in the game, and when he gets up a head of steam, nobody – especially defensive backs – have any interest in tackling him. A.J. Brown is almost as intimidating, but fortunately for opposing defenses, the ball is only in his hands 6 or 7 plays per game. Ryan Tannehill leads the offense that also relies heavily on the play-action game. Tennessee doesn’t have to establish the run to start games because it is established before the game starts, and the Titans will often start the game with multiple play actions to keep the defenses honest. Brown and veteran Julio Jones are a challenge for any defense to deal with, especially defenses that want to load the box and stop the run. Julio really hasn’t gone off yet this year, catching only 17 passes in the five games he has suited up for and has been hobbled by hamstring issues all year. Tennessee had a slow start in Week 1 dealing with Covid issues and put up 14 against the Cardinals, but have topped 24 points every week since, and topped 30 three times. They will be difficult to slow down this week, but the Colts have a chance.

These teams met in Week 3 in Tennessee, and the Colts defense held their own. Unfortunately, they were on the field for 35 minutes because their offense was 3 for 12 on 3rd down, and the defense wore down. Indy’s offense playing better means the Colts defense should be fresher and have a better chance as the game goes on. Henry only averaged 4 yards per carry against Indy, and his longest run was 19 yards. Indy is 13th in the league allowing 4.2 yards per carry, but they have played the best running teams in the league, including the Titans, Ravens, Rams, and 49ers. They have struggled against the pass, so they will need better performances from their secondary that has been disappointing in the early going this year. There are a lot of offenses in 2021 that can’t be stopped, and Tennessee is one of them, but I think that the Colts can slow them down this week.

Titans Are Due for a Let Down

Tennessee is coming off consecutive wins against the Bills and the Chiefs. They were home underdogs in both of those games and now are road favorites in Indianapolis. Coming off those two wins and going on the road to play a team they beat by nine points a month ago is a set up for a letdown. This is also the team that lost to the Jets earlier this year, so they have proven that they can not show up for a game. The Titans have put up a two-game lead in their division, while the Colts are still trying to dig out from the early season hole they put themselves in. Indy is a better team than Tennessee saw in Week 3 and is really the only team the Titans have faced this year that wants to run the ball.

Play the Colts at Home

The play in Indy this week is to ignore the hype about the Titans and buy a Colts ticket. Look for Indy at home to be able to take care of business. Bet your Week 8 football picks for FREE by scoring a 100% REAL CASH bonus on your first deposit of $100 to $500 at GTBets Sportsbook!