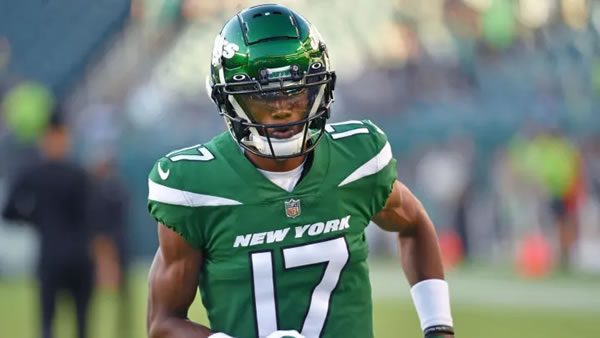 The Jacksonville Jaguars take on the New York Jets at MetLife on Thursday Night Football. This week 16 game is an important one for both teams. Once facing a hopeless situation, a recent Jacksonville surge, along with the failing of first-place Tennessee, has given the Jags some hope. Even at 6-8, they’re now right on the Titans’ heels after an impressive 40-34 win over the Cowboys on Sunday. They come into East Rutherford to face a struggling Jets team that, despite making gains this season, is sort of falling apart late with three straight losses, including a 20-17 loss to the Lions on Sunday. Who can deliver us the cover on Thursday Night Football?

The trajectories of both teams seem to be constantly-changing this season. For the Jags, early promise showed in the first several games dissolved into a long stretch of struggling. Tennessee kept winning, and before long, the Jags were buried. But QB Trevor Lawrence found a second wind, and before long, the aerial game became vital. Travis Etienne had a big game on the ground against Dallas to help steer the win in their column. In the last month, other than a flop against another hot team on the road in Detroit, we’ve seen the Jags looking really good. Finally, the revamped aerial corps is delivering, with Christian Kirk having a fruitful season and the recent explosive play of Zay Jones, who had three TDs against Dallas on Sunday.

Things were looking good for the Jets at 7-4, with three straight losses now reducing their margin for error to nil. This is a good young team that finally has some real hope. But between the injuries and the carrousel of different starting quarterbacks, it was hard to achieve continuity offensively. It’s not like they fell off a map, as these three losses were all of the one-score variety. But they’ve lost a little edge lately, and one has to chalk it up at least partially to the effect of injuries and perhaps the notion that while this season was promising, they still have some stuff to address before making a run to the postseason.

It definitely counts for something, until remembering how emphasizing momentum probably didn’t help when betting either team this season. Getting on Jacksonville as they started looking good hasn’t always paid off this season. Betting against them when they look ragged hasn’t really worked out either. And that applies to the Jets too. The Jaguars look really good right now. But they’re on the road now, going against a defense that can be pretty tough. Will the offensive fireworks really just continue on unabated? For the Jets, you’d like to see QB Mike White in there. While he seemed close to being a go on Sunday, you could think he’d be ready to go here, but it is a short week, so it’s definitely something to keep an eye on leading up to game time. On Sunday, Zach Wilson had one of his better statistical games, but White has extracted more out of the offense, especially aerially. Sure, the Jets are hurting, but the close games they’ve lost, the potential return of White, and the notion that a good home defense can maybe curtail Lawrence and his weapons almost force you to put less emphasis on bottom-line current form.

When you see a team like the Jags did deep and make a big comeback in coming out on the sunny side of a massive shootout against the Cowboys, you really want to praise them and rightfully so. At the same time, the defense they’re facing this week is unlikely to grant a similar outpouring of points to the Jags. And that Jacksonville defense has just given up 40 points for the second time in three weeks. That part of their team looms as a threat to undermine the entire team effort at any given time, regardless of how well Lawrence and Company are playing. And the Jags will also be getting their first taste of northern cold in late-December New Jersey weather.

Matchup Issues for the Jets

To their credit, the Jets have patched up injuries pretty well. QBs are seemingly constantly in injury trouble. Their run-game has taken a huge hit. The receiver corps is always missing pieces. The O-line is losing power over the course of the season with personnel losses. Key members of the defense have been bitten by the injury bug. Contrast that to a Jacksonville team that now has all its major pieces in action and is ready to go. You start to wonder if the Jets won’t be suffering from an overall firepower deficit that might be too much to overcome. A Jets team that is close to being full-power would be a different story in this spot.

This is an ultra-urgent spot for both teams. The Jags have a golden opportunity to pounce on a wayward Titans squad and maybe nose ahead. The Jets, meanwhile, can still climb into the wild card hunt if they can get back to winning, with a loss here being the likely final blow. And while the setting favors the Jets, I think a lot of other things shake out for the Jaguars. Between the momentum, they’ve gained aerially, their options on the ground, and their overall state of being intact and on a roll might just be all wrong for the Jets right now. I’ll take the Jaguars.

Loot’s Prediction to Cover the Point Spread: I’m betting on the Jacksonville Jaguars plus one point. Bet your Week 16 NFL predictions for FREE by scoring a 100% real cash bonus up to $500 when you use bonus promo code PREDICTEM at Betnow Sportsbook!