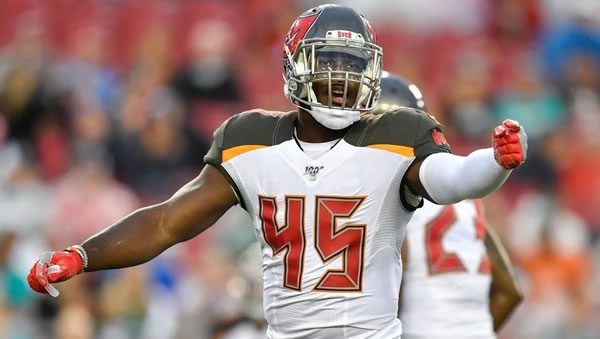 The Tampa Bay Buccaneers come to Lincoln Financial Field to take on the Philadelphia Eagles on Thursday Night Football. Both teams were coming off wins last week. For Tampa, it was an emphatic performance befitting a champion, as they smashed Miami, 45-17, Tom Brady had his first 400-yard/5 TD game to underline how well the offense was flowing. They now come into Philly to take on the dangerous Eagles, fresh off their comeback 21-18 road-win over the Panthers on Sunday. Not only would a win here get them back to .500, but it would really lend some credibility to their season.

Hope for the Eagles

On the surface, there are some troubling elements to this matchup for the Eagles. A team that depends on the run, the Eagles will be pitting that part of their arsenal against one of the toughest teams to run on in the league. And while the Eagles’ defense has fared well in spots, containing the innumerable weapons in the Tampa Bay offense is another matter entirely. Teams have been able to run on the Eagles with impunity this season in stretches, and whatever weakness a defense may have, this Tampa team is well-equipped to exploit it.

Still, it’s a short week where we saw a lot of the Tampa weapons unleashed. Tom Brady has defied reason time and again in his career, but his thumb is hurting, and maybe this short week isn’t going to be to his liking. You have a defending Super Bowl winner, and while they haven’t shown much let-up, we’ve seen this offense perform to varying degrees. And if looking to time a down-spot, maybe this spot isn’t such a bad candidate.

While the Eagles haven’t faced a team with as many aerial weapons as Tampa, they have, in fact, been pretty good against the pass this season. That could be a byproduct of teams running against them with such ease. But maybe that can at least help curb the Tampa onslaught to the point where they’re not just marching up and down the field. And let’s face it, Jalen Hurts been better than some expected. It’s not always going to fire with this Eagles’ offense, and for the most part, on Sunday, it was a grind. But they showed some clutch on both sides of the ball, and Hurts delivered when needed late to beat a pretty good Carolina team.

BE SURE TO CHECK OUT OUR WEEK 7 NCAA FOOTBALL PICKS!

What to Expect from The Bucs This Week

It can be a fool’s game to fade the Tampa offense. But there are going to be weeks, whether it’s the opposing offense or the normal up-and-down of a defending champion when it’s not the thrill-a-minute unit we see often enough. They’re coming off a game where they let it fly, pounding an outmanned opponent with the sheer variety and horsepower of their offense. But is expecting to see that twice in five days, not maybe pushing the envelope a little bit? Still, when seeing the Buccaneers’ offense languish a bit, it was against defenses that didn’t have glaring weaknesses like what the Eagles have with their resistance up-front. They do make up for it with some playmaking, but it’s still leaky.

Unfortunately for the Eagles, the Tampa Bay defense isn’t likely to have that same somewhat erratic trajectory as the offense has. We’ve seen them labor against offenses like the Cowboys and Rams, but the Eagles are still working on getting to that point. Hurts can spring some runs and has a dangerous arm, but he’s surrounded with what you could call a thin cast. Rookie DeVonta Smith has flashed his potential, as has Quez Watkins, and they get decent tight-end production from Dallas Goedert and Zach Ertz. But we see RB Miles Sanders disappear for stretches, and Hurts isn’t always getting the help from the RB position to make the running game really stick. Having a banged-up O-line doesn’t help.

Therefore, this is a spot where the Tampa defense could possibly shine. They should be able to get after Hurts and disrupt his flow while taking a one-dimensional Philly run-game and rendering it moot in spots. That leaves Hurts, who might not always have a clean pocket with which to work, to depend on a pass-catching crew that may or may not deliver. It’s just that the Tampa “D” could make it hard for the Eagles to keep pace, even if the Bucs’ offense isn’t hitting on all cylinders.

Is this where the Super Bowl hangover resonates? They’re in their own conference, but this is a bit of a tricky road spot, especially on the short week. There is a lot of youth in key positions on the Eagles’ offense, where fatigue is less likely to resonate. Did the late-comeback win put some wind in the sails of Philadelphia, just in time for this quick-turnaround home game? Is the Eagles’ secondary legit enough to curtail the Tampa air-raid and keep this one in the ballpark?

While it hasn’t shown in spots this season already, something tells me the Eagles are at least slightly better than what people are thinking. There are such established stars on Tampa that it creates a stark comparison that may serve to overstate the case. A well-oiled Tampa offense and a team that appears to amply motivated despite all their success could very well be hell on a still-developing Eagles’ bunch. Philly has been good against the pass, but not this pass, and the Bucs could run them over to some extent. I just sense a slightly flat Tampa team and a fired-up Eagles squad combining to make for a pretty good game. I’ll take the points.

Loot’s Prediction to Cover the Point Spread: I’m betting on the Philadelphia Eagles plus 7 points. Bet your Week 6 NFL picks for FREE by taking advantage of a 100% REAL CASH bonus on your first deposit of $50 to $300 at MyBookie! (Must use bonus code PREDICT100 when you register!)