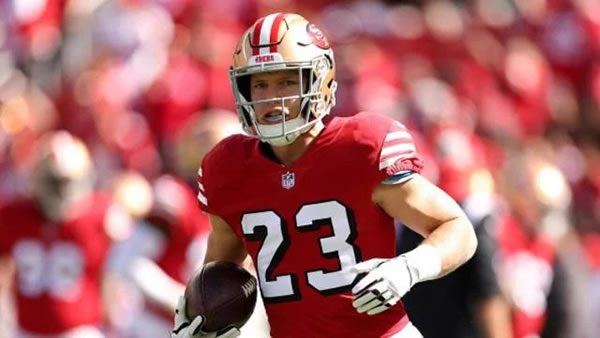 The Washington Commanders make the trip to Levi’s Stadium for a Saturday NFC showdown with the San Francisco 49ers. San Fran is coming off the long week after beating the Seahawks last Thursday, 21-13. Now at 10-4, the 49ers have won 7 games in a row, quite a commendable feat among a lot of personnel issues. The Commanders seemed to have a nice chance to keep a recent surge going on Sunday. Coming off four games without a loss and facing a Giants team with four straight winless games, the Commanders were beaten at home, 20-12, and look to regroup this week while still having a lot to play for with three games remaining.

They’re facing a long road-trip after coming up short in a deflating Sunday Night Football spot, getting the quick turnaround and facing a team nice and dug in at home coming off the long week. The Commanders are facing an urgent situation, as a loss would really put them behind the 8-ball for a wild-card spot in the NFC. And having that spot come against a team with seven straight wins makes this a less than fortuitous-looking spot for the Commanders. They’ll be facing a team that has almost become bulletproof, with this recent streak defying all logic. They’re now 3-deep at QB with Brock Purdy behind center. The addition of Christian McCaffrey has helped ease the loss of other guys getting hurt. But it’s still says a lot about the character of a team to soldier through all this and actually thrive in spite of it all.

Washington has a decent cast of differently-talented pass-catchers who can combine to form a decent enough aerial attack. But the real strength of their offense is the run-game. Unfortunately for them, the Niners have the top-ranked run-defense in the league, and opposing running backs are often grasping for straws in this matchup. Considering that even when the run-game is working that points aren’t always guaranteed, it just makes it seem like the Commanders might be reduced to a narrow scope of scoring.

It’s still somewhat remarkable that the Commanders have not allowed more than 21 points since week four. When you’re coming into a spot where you’re getting a TD on the point spread, that looms somewhat large. The 49ers are operating with the final pick in the draft behind center and maybe benefitted from playing some softer defenses during this recent stretch of impressive offensive performances. Anything like what they did when they scored 21 against the Seahawks last week will make it hard to cover the spread this week.

The True Strength of San Francisco

It’s hard to say they don’t have a really good thing going in San Francisco. Head coach Kyle Shanahan and his staff, along with the players, are making a habit of overcoming things that sink most teams. The injury list for the 49ers could form a team—that’s how many guys are out of action. But having built up this muscle over the years, they’ve developed a callous to these issues, along with a lot of depth that makes overcoming all these personnel issues a lot easier. The bulk of their strength is on defense, which doesn’t get as much attention, especially as San Francisco’s excellence is spread out over the whole defense. And with Deebo Samuel out of action, it looks like the acquisition of McCaffrey might have saved them. Having George Kittle, Brandon Aiyuk, and others is nice, but CMC is a difference-maker upon which the Niners can rely.

The Niners are still gunning for a premier playoff position, and while they’re looking up at the Vikings and Eagles, the idea that they could get there after starting the season at 3-4 and seeing two quarterbacks go down is really remarkable. It brings into focus the fact that Washington has more than some unfavorable matchup components going against them this week. They are also going against a team with tremendous inner-resource, and it’s not very lucky that their big show-and-prove moment of the season comes on the road against this bunch.

The Case for Washington

The Commanders’ offense is not great, but there is at least some variety. With guys like Terry McLaurin, Curtis Samuel, Jahan Dotson, along with backs Brian Robinson and Antonio Gibson, there are some options, different guys who can step up. That variety could stick against a defense that is, in fact, very tough. It’s still a defense that won’t be able to hone in on any one thing. You have a SF offense that has thrived, but this is a Washington defense that has spent the past three months avoiding getting run over in any kind of real way, repelling some pretty potent offenses along the way. Getting a touchdown here, the defense alone makes them a pretty attractive underdog option.

Going against a San Francisco team that is so resolute is not easy in this late-season spot. They’re at home, rested, and ready to take on the stretch run of the regular season with gusto. But against this Washington defense, creating a lot of separation this week might not be easy. And while it’s hard to find a team that has fought as hard as the Niners this season, it wasn’t easy for the Commanders to rally to get to this spot, and now on the verge of seeing it all be for naught, I’d expect a little something extra on both sides of the ball. I’ll take Washington this week with the points.

Loot’s Prediction to Cover the Point Spread: I’m betting on the Washington Commanders plus 7 points. Bet your Week 16 NFL predictions for FREE this week by scoring a 50% real cash bonus up to $250 in free bets at the best sportsbook on the web! —> Bovada Sportsbook! They pay fast, offer TONS of prop bets and have the BEST live wagering platform on the planet!