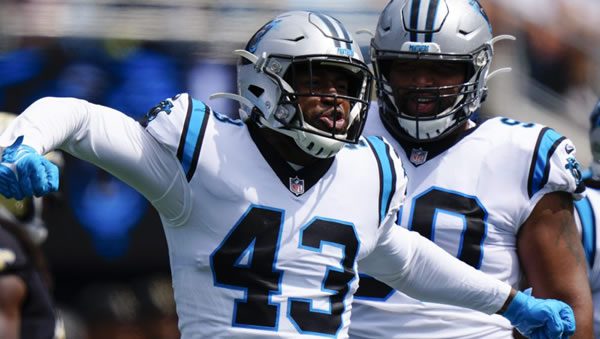 Tom Brady suffered his first shutout loss since 2006 last Sunday night in an embarrassing 9-0 loss to the New Orleans Saints. Not only was it an embarrassing loss for Brady but also for the reigning Super Bowl Champions, who are still considered by many as the best team in the NFC. Luckily, Tampa Bay will have a great opportunity to bounce back on Sunday when they travel to Charlotte to meet the hapless Carolina Panthers, who have lost four straight games. In fact, Tampa Bay will be a sizable 10.5 point favorite which is the largest spread the Buccaneers have been favored by all season.

Sunday’s meeting between the Buccaneers and Panthers will be the first of two meetings over the next few weeks as the Buccaneers are slated to host the Panthers at home in week 18. For Carolina, the season has turned into a nightmare, mainly on the offensive side of the ball behind center. QB Sam Darnold has turned out to be a complete dud after moving over to the team from the Jets last year. Darnold has tossed just seven touchdowns compared to 11 interceptions and battled injury issues all at the same time. The Panthers’ organization was given some hope with the signing of former franchise QB Cam Newton; however, that experiment has also proven to be an utter failure. As a result, Carolina has been among the worst offenses in the NFL throughout the season, which is the reason they are huge underdogs against the Buccaneers on Sunday.

Head Coach Matt Rhule has been very reluctant towards sharing any information on the Panthers’ quarterback situation this week. QB Cam Newton has been a complete train wreck over the last three games. In those three games, Newton has completed 38 of 82 passes for just 426 yards with one touchdown and four interceptions. The reason that Newton’s status is uncertain on Sunday is that the Panthers’ have been very tight-lipped about Sam Darnold’s shoulder injury. If Darnold is able, he clearly gives Carolina the best chance to compete, and that is why his injury status must be monitored throughout the week.

Personally, I believe that Darnold’s shoulder injury will prevent him from suiting up this week. With Cam under center, the Panthers are just helpless in this match-up. Tampa Bay owns the NFL’s best rushing defense, and their front seven is as talented as any group in the NFL. Considering Newton’s throwing strength can’t even challenge the Bucs secondary, Defensive Coordinator Todd Bowles is one of the best defensive minds in the business and is notorious for finding ways to pressure opposing quarterbacks. Those ingredients present a daunting challenge for an underwhelming Carolina front, and I expect that Newton will be under heavy duress when that happens. Considering the way Newton plays under any intense pressure, this game has the potential to be a dominant results-based performance for the Buccaneers defense, and I would not shy away from the comment even in Darnold returns either.

The biggest concern that Tampa has for Sunday surrounds the personnel factor. Both of the Buccaneers’ biggest receivers went down against the Saints, which resulted in an awful performance by the offense. WR Chris Godwin went down with an ACL injury in last week’s loss to the Saints, and WR Mike Evans is battling a hamstring issue. Meanwhile, RB Leonard Fournette is also expected to miss serious time over the next few weeks due to a similar hamstring issue suffered in the Sunday night loss. While the running back duties will be handed to Ronald Jones, the Bucs could be without their three biggest playmakers at the skill positions. With that said, I will be the first to admit that Carolina’s defense is underrated. In fact, they are among the better defenses in the league though the Carolina offense does not allow those feats to come through on the statistics chart. Against a depleted Bucs offense, I would not be surprised to see the Panthers’ make things difficult on Brady for the 2nd straight week.

Jay’s Pick: Clear and obvious advantage spot for both defenses in a divisional match-up. Take the UNDER 44 with confidence! Also, be sure to check out my bowl game predictions! They’re free!