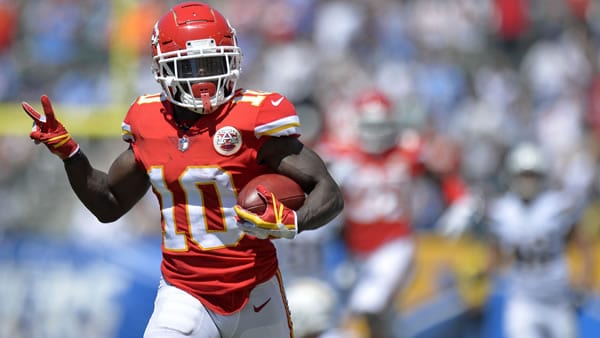 Technically, the Pittsburgh Steelers own the best record in the NFL as they remain the only unbeaten team remaining in the league. With that said, the consensus best team in the NFL remains heavily favored to the defending Super Bowl Champions in the Kansas City Chiefs. Since their Week 5 loss to the Raiders, Kansas City has responded with three straight impressive wins that also resulted in 3 consecutive covers against the spread. Most recently, the Chiefs overcame the largest points (-20) spread of the season in a 35-9 blowout victory against the Jets on the heels of 5 touchdown passes from quarterback Patrick Mahomes. On Sunday, the Chiefs will look to keep the momentum rolling with another lofty 12 point spread against the Carolina Panthers at Arrowhead Stadium.

The Carolina Panthers are coming off a disappointing loss last Thursday against the Atlanta Falcons. Despite winning three straight games in week 3-5 and shining some optimism on Head Coach Matt Rhule’s debut season, the Panthers have now lost three straight games while dissolving much of the optimism around the program. Perhaps most concerning is the fact there are not any glaring issues preventing the team from excelling. The Panthers have basically embarrassed mediocrity from a statistical component ranking 15th in total defense and 19th in total offense. However, the return of All-Pro running back Christian McCaffrey could get the offense some more firepower, which they will need in Sunday’s road trip to Kansas City.

SWEET BONUS FOR SMALLER BETTORS: DEPOSIT $25 AT THE WEB’S OLDEST SPORTSBOOK AND THEY’LL GIVE YOU AN EXTRA $50 JUST FOR TRYING THEM OUT! MUST USE BONUS CODE ROOKIE200 - CLICK HERE TO SIGN UP AT INTERTOPS!

Personally, I believe Panthers QB Teddy Bridgewater has done an outstanding job in his starting role for Carolina. The former Saints backup has completed 71% passing this season for 2,106 yards with nine touchdowns and just six picks. As an extension to Bridgewater’s success, wide receivers DJ Moore and Robby Anderson are on pace for career seasons combining for 1,310 yards through the first eight games. Despite these optimistic stats, the Panthers still rank 19th in total offense and have averaged just 22.4 points (26th in NFL) per game.

Perhaps the reasons for the mediocrity on offense is the lack of big plays combined with turnovers. The Panthers have given away nine turnovers this season, which is a concern, but I personally think the offense needs more explosiveness. Fortunately, Panthers fans will get their biggest star back this weekend, which should help that narrative. All-Pro running back Christian McCaffrey has been out since week 2 with an ankle injury but is expected to make his return this Sunday. Last year, McCaffrey led the league in all-purpose yards with nearly 2,400 yards from scrimmage, eclipsing 1,000 yards in both rushing and receiving. Backup running back Mike Davis has done a good job in recent weeks in a relief role, but he does not require the defensive focus from opposing teams that McCaffrey requires. Therefore, the Panthers should have some extra firepower this Sunday against a tough Kansas City defense.

I mentioned above that the Chiefs have covered three straight games against the spread, which probably does not grab much attention. However, bettors should also consider the Chiefs are 6-2 ATS on the season. Outside of pure betting statistics, the 6-2 mark ATS really points to the quality of play on both sides of the football. Everybody is familiar with QB Patrick Mahomes, WR Tyreek Hill, TE Travis Kelce, and now rookie running back Clyde Edwards-Helaire and recently acquired RB LeVeon Bell. The offense is basically an all-star cast. However, the Chiefs’ defense is continuously overlooked because of the offense’s flashy and exciting play. Still, the Chiefs defense has only given up more than 20 points once all season, and that was in the loss to the Raiders.

The Chiefs have been outstanding against the pass allowing just 201 yards per game, which will make things challenging for Teddy Bridgewater when you also factor in the Chiefs pass rush. Ultimately, this match-up looks like another cover opportunity for Kansas City. However, the only concern is the Chiefs rush defense. The Chiefs have a bend but don’t break style rushing defense, which has allowed 142.8 yards per game, which is the 4th worst mark in the NFL. If that statistic holds true, McCaffrey should have opportunities on the ground, and the Chiefs must tighten up their run defense. If that happens, there are many more paths towards another Chiefs cover this Sunday.

Jay’s Pick to Cover the Point Spread:The Chiefs defensive splits have been much better at home this season, and I think this is an upside match-up on both sides of the ball. I think they will take care of Carolina efficiently. Take Kansas City -12. Make the Chiefs a +8 underdog AND lay only -105 odds on your bets at BetAnySports! Make the switch to reduced vig! You’ll be SO glad you did!