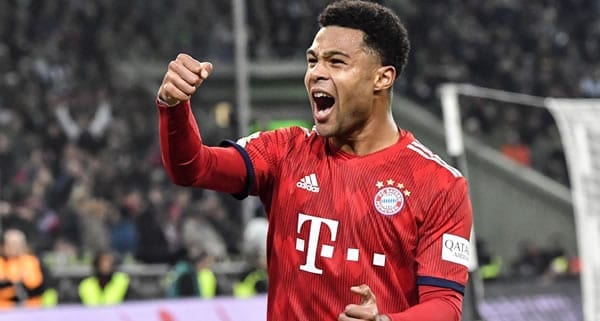 This is the last place Monchengladbach wanted to find itself: locked in a tight race with Bayer Leverkusen for fourth place and facing Bayern Munich with the Bavarians on the doorstep of the title. Bayern Munich could win the crown Saturday if Borussia Dortmund fails to beat Dusseldorf, but most likely, a victory here will set Bayern up to win the title on Wednesday at Werder Bremen.

The saving graces for Monchengladbach are that Bayern will come in at less than its best, given that the Bavarians played on Wednesday in the German Cup while the foals are resting and Bayern is down its two best scorers thanks to yellow card accumulation. But with Monchengladbach now on 198 consecutive minutes without a road goal, will that be enough to matter?

So much for Union Berlin being the tonic that the Foals needed to get back on track. Monchengladbach got that win, but they promptly gave that back by losing at Freiburg, dropping them into an exact tie with Bayer Leverkusen for the all-important fourth spot. The real problem for the Foals is that outside of six minutes against Frankfurt, their attack has looked totally out of sorts since the restart began. Only two of five matches have seen more than one goal from Monchengladbach, and both of those came against weak defenses in the bottom half of the standings.

In order to break down the Bayern defense, Monchengladbach needs to find a way to get Marcus Thuram free. Usually, Thuram would have his running mate, Alassane Plea, available to open up the back four, but Plea is suspended for this match because of yellow card accumulation. That’s going to make the job extremely difficult for an already struggling attack, which suggests goals could be at a premium.

DEPOSIT $25 AND GET AN ADDITIONAL $50 FREE AT INTERTOPS SPORTSBOOK!

Hansi Flick is probably delighted to be done with Frankfurt for this season. In six matches since the restart, Bayern has come up against Frankfurt twice, and both times, they’ve had to struggle, winning 5-2 and 2-1 against the Eagles. Against anyone else, however, Bayern has looked practically invincible. The Bavarians’ attack has looked frightening at times, topping four goals in three of their five Bundesliga matches. Of course, when you have Robert Lewandowski scoring four goals in three games, it’s pretty easy to boast the best attack in the league.

But Bayern doesn’t have Lewandowski for this match, as the leading scorer in the Bundesliga is suspended thanks to yellow card accumulation from the win over Bayer Leverkusen. The scoring job would typically fall to Thomas Muller, Bayern’s top assist man, but he’s also suspended for the exact same reason. Bayern still has plenty of scoring options, but it’s going to take some major work by Flick to keep the attack from getting bogged down without their best scorer and best talisman. Look for Serge Gnabry to take the lead as Bayern looks for Plan C.

Monchengladbach has not looked itself since the restart, and they’ve especially looked rudderless when they’ve gone on the road. This team isn’t the same one that beat Bayern in December, and the Bavarians certainly haven’t forgotten that result. However, without its two best attackers, I think Bayern is going to opt to save its legs down the stretch and focus on the defensive side of things in the second half rather than putting up more goals, so I really like Bayern to win to nil at +170. Bayern has shut out three of five opponents since the restart, and from what I’ve seen from Monchengladbach, the Foals do not look capable of breaking down the Bavarians’ defense.

I’d also consider throwing a bet on Bayern to hold a lead at halftime at -134. I think Bayern needs to take control of this match early, and I believe Hansi Flick’s going to be thinking along those same lines. I expect Bayern to get a goal or two in the first 45 minutes and then suffocate the Monchengladbach attack to get the three points, making the small juice a reasonable price to pay. If you think Bayern’s attack gets bogged down without Lewandowski and Muller, you might want to play the under, as the Bavarians don’t need to win this match to set themselves up for the title and could go full defensive. With three top scorers out, backing Bayern to win and under 2.5 goals at +400 looks very appealing.

If Bayern were at full strength, I’d really like them to put up a big number. But with no Lewandowski and no Muller, Bayern is likely going to simply go for the small victory and get out. This would be there for the taking for Monchengladbach, but with Plea suspended and Bayern still strong at the back, I can’t see them getting anything out of this match. I think a 1-0 Bayern win at +1000 is the right way to go here. Find the lowest paying soccer favorites and highest paying underdog bets at 5Dimes Sportsbook!