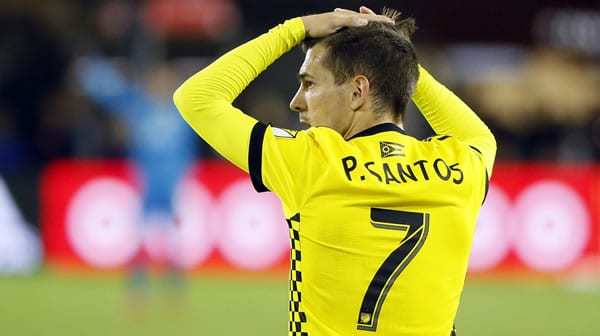 Cincinnati beat Columbus 2-1 on October 14 at Nippert Stadium in Cincinnati.

The Hell is Real Derby resumes in southwestern Ohio, and both teams enter looking to build some positive momentum and get back on the right side of the cut line in the Eastern Conference playoff chase. Columbus enters, having taken a draw from each of its past two matches, but getting a third straight result might be a difficult ask for a side that has been decimated by international call-ups. The Gold Cup starts on Saturday, and Columbus will be without its leading goalkeeper and its best scorer, hardly the way the Crew wanted to go back on the road.

Cincinnati is missing two players themselves, but neither Allan Cruz nor Ronald Matarrita are as important to the Orange and Blue as Gyasi Zardes, and Eloy Room are to the Crew. But Cincinnati is 0-3-0 at TQL Stadium since opening its new home, and it hasn’t looked comfortable at all in front of its own fans in 2021. Opportunity is here for Cincinnati to get three points against their rivals, but whether they can seize it is another question entirely.

Scoring goals was hard enough for the Black and Gold when both halves of the Z-Train were on the pitch. Now the Crew’s only going to have Lucas Zelarayan in action, as Zardes will trade in his banana-skin jersey for the red, white, and blue of the U.S. national team for the Gold Cup.

Whether the Crew can find anything without him will go a long way toward deciding whether they can get back in the Eastern Conference race. Zardes scored one of his team’s two goals against New England and caused a Revolution error that gifted the Crew their equalizing goal while the rest of the Crew continued to misfire. With Zardes out of action, Columbus’ best attackers have been Zelarayan and “the other team,” as three of the Crew’s 11 goals have been own goals.

But at this point, Columbus won’t really care how it finds the net on the road as long as it does. In 2021, the Crew have now played six road matches, and they’ve only scored two goals, both against New York City. Otherwise, they’ve played out two scoreless draws and taken three shutout losses.

At this point, FCC might be wondering if it’s too late to go back to Nippert Stadium because it hasn’t yet gotten so much as a draw in its new building. So far, TQL Stadium has seen three matches, and the combined score is Cincinnati 2, Visitors 6, with both FCC goals coming in a 3-2 loss to Miami. Cincinnati does come in having earned seven points in its past three matches, and Alvaro Barreal is a big part of that, having scored twice in that stretch.

The big question for FCC is whether it can start to turn the corner and make itself a real contender for a playoff spot. Piecing together points is how you get to the postseason in MLS, and one of the best ways for a team like Cincinnati to do it is by taking advantage of absences. The Orange and Blue have always shown up to play when they host Columbus, and they’ll have to do it again to get something out of this.

With Columbus already struggling and now down its best scorer, my best bet is +175 on Columbus to fire a blank. The Crew have been shut out five times out of six on the road, and that was when they were at full strength. With Columbus nowhere near that and Cincinnati’s defense playing pretty well, it’s difficult to see how Columbus gets an attack going.

Beyond that, I’ll take a shot here on Cincinnati to win and under 2.5 goals scored. I can’t see an explosion coming for the Orange and Blue here, and to get this at +375 represents a great opportunity from my perspective. I can’t see this match having more than a goal or two, so I’ll take the higher payout instead of going with the win to nil bet.

Finally, as a conservative bet, I’ll play a no on both teams to score at -115. This fixture usually features a lot of goals, but with players missing, I expect this to be closer to a repeat of last year’s scoreless tie.

Taking Cincinnati to win a match is always a considerable risk, but with Columbus down several players because of the Gold Cup, this seems like FCC’s chance to get things going in the right direction. Columbus hasn’t shown anything to suggest that it can get any kind of attack going on the road, and I don’t think that changes with no Zardes. I’ll take Cincinnati to win 1-0 at +675. Bet your weekend soccer picks FREE by taking advantage of a 100% bonus up to $500 at GTBets Sportsbook!