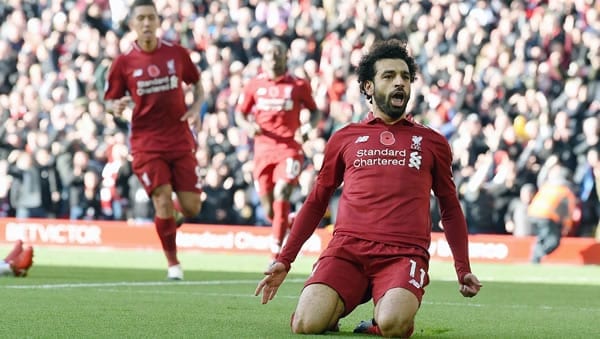 The break did nothing for Liverpool, as the Reds came in flat against Everton and failed to find the net in a scoreless draw. Meanwhile, Crystal Palace picked up where it left off by earning its fourth consecutive win, seeing off Bournemouth for a comfortable victory. The Eagles have charged up the table and are now within striking distance of a spot in the Europa League.

However, just because Palace is on form and Liverpool are not doesn’t mean the league has turned on its head. After all, the best team Palace beat in its four-match stretch was Newcastle, which sits 13th in the Premier League. Liverpool, even when it’s not playing anywhere near its best, represents a massive step up in difficulty.

Whoever said that soccer was a dull sport that didn’t feature much action was probably a Crystal Palace fan. Anything more than a goal in a match is an adventure for the Eagles, as their two-goal performance against Bournemouth ended a five-match streak that saw Palace either get shut out or find the net once.

When Palace does find the net, it’s usually Jordan Ayew doing the job. Of the 28 Palace goals this season (second-worst in the Premier League), nine of them belong to Ayew, and no other Palace player has more than three markers on the year.

Truth be told, this is fairly typical of a Roy Hodgson side: the Eagles aren’t flashy but are effective. They know who they are and what they do, and they frustrate teams by being better conditioned. That style failed for Hodgson when he managed England because it’s not possible to implement it with a national team, but with a low-budget club like Palace, it’s been an effective game plan.

If you want flashy, that’s Liverpool all the way, or that was Liverpool until February. The Reds have made it look so easy all year that it’s now evident that the pressure to be historic is weighing on these players. Liverpool rarely plays well at Goodison Park, but a 0-0 draw for this side is something that never would have happened back in the fall.

The hard reality is that Liverpool’s attack is off, and there might not be a way to fix it. Mohamed Salah is expected to return for the Reds in this match, which could very well be the boost that Liverpool needs. But if Salah and his 16 goals aren’t enough to get Liverpool back on track, this could be a rough finish to what had been a march to glory.

As dominant as Liverpool has been, Palace has tended to play the Reds pretty tough. Liverpool has won five straight against the Eagles, but four of them have been by one goal. Because of that, I think taking Palace +2 is an excellent way to play this match. You’ll get +110 to take the Eagles with the extra goals, and given that I’m not sure that this match even features two goals, I think that’s a great value play.

If you’re really feeling daring, it’s worth gambling on Palace on a double chance here. Liverpool is feeling the pressure, and playing at Anfield with no spectators might be the last thing that the Reds need right now. Getting +325 on the possibility of Palace stealing a draw is a tremendous value.

Finally, if you just can’t see yourself going against Liverpool, I’d recommend playing under 2.5 goals for the match. Palace is now on four straight games without conceding, and Liverpool’s confidence is a lot lower than usual going into this match. I think this could be another low-scoring contest. Bet your soccer picks for FREE by taking advantage of a 50% REAL CASH bonus where you can deposit anywhere from $100 to $500 and get 50% added to your account! Find this great offer at one of the biggest bookmakers on the web —> Bovada! (Credit cards work well there!) Want to reseach them first? See our Bovada Sportsbook Review.

I know what Liverpool is capable of, but I know that what Liverpool is capable of is probably not what’s going to happen on Wednesday. The Reds are just not themselves right now, and I think their struggles are going to continue against a side that doesn’t fear them and will play them tough. With Salah on the pitch, however, I think there’s just enough for Liverpool to get the win that will put them on the doorstep of the title. I’m going to back another one-goal win for Liverpool and take the Reds to win 1-0 at +575.