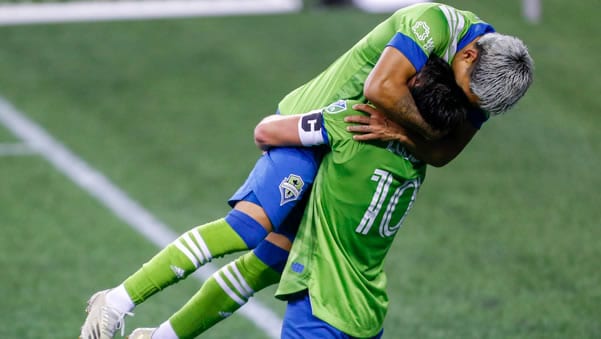 Seattle beat Dallas 4-3 in extra time on Oct. 19 at Lumen Field in Seattle.

Once again, it’s Dallas vs. Seattle in the Western Conference playoffs, as for the fifth time in the past seven years, these sides meet in the postseason. Because of COVID, these teams didn’t play at all this year, as Dallas got disqualified from the MLS tournament in June and didn’t play in Seattle’s group as scheduled, making this the first matchup between the sides since their epic showdown last year.

Three times, Seattle got a lead, only to watch Dallas come back before the Sounders finally found the wooden stake in extra time behind Jordan Morris’ third goal. Now Dallas is once again the underdog trying to put a stop to Seattle’s march toward a fourth MLS Cup appearance in five years. The Toros have failed to do it in each of their past two tries, and both times, Seattle ended up lifting the Cup after going through FCD. But Dallas is playing with house money here, as it’s only here because it scored in the final minute of stoppage time against Portland and then beat the Timbers on penalties. Can they continue their Cinderella run, or will Seattle once again frustrate its Texas rival?

The fact that Dallas managed to find the net against Portland was a minor miracle because the road has been a dark and lonely place for Dallas as of late. In their past six road matches prior to the trip to Oregon, the Toros managed just one goal, finding the net against Nashville in a 1-0 win. Otherwise, it’s been one shutout after another in a season that hasn’t featured much in the way of scoring.

With just 28 goals in 22 games, no team in the Western Conference playoff bracket had fewer tallies than FC Dallas. The Toros did most of their scoring in a three-week stretch between August 29 and September 19, where they hit 15 goals in six matches. But Dallas has just nine goals in its last 11 contests, and it really only has one primary weapon in Franco Jara. Nobody else has more than four goals on the season, and Dallas has just seven goals away from home for the entire season.

BET SOCCER MATCHES LIVE WHILE THEY HAPPEN AT THE WEB’S BEST LIVE BETTING PLATFORM —> BOVADA SPORTSBOOK! THEY GIVE YOU A 50% BONUS TOO!

Raul Ruidiaz did it again for Seattle in the win over LAFC, scoring his eighth career postseason goal and adding two assists in a comfortable win over the Black and Gold. But it’s Jordan Morris who worries Dallas much more, and for a good reason. The homegrown product was instrumental in the Sounders taking out FC Dallas last year, as he scored a hat trick that included the winning goal in extra time. Morris closed out the scoring in the win over Los Angeles with a late insurance marker, and the Sounders continued their penchant for scoring goals on their home turf. In ten home matches, Seattle has sent multiple goals into the net seven times.

However, a leaky defense has been a worry. The Sounders have had to send multiple goals into the net because their defense has conceded a goal in nine out of 10 home matches on the season. To their credit, in eight of those nine matches, one was all the opponent got, as Portland was the only team to score twice in Seattle all season. Not coincidentally, that was the one home match all season that Seattle lost.

In fact, two is simply the magic number for this Sounders offense. When the Sounders score at least twice at home, they’re 7-0-0. When they don’t, they’ve settled for two 1-1 draws and one defeat.

This matchup involves a stoppable force against a movable object, as Dallas’ weak offense goes up against Seattle’s porous defense. It’s tough to trust Dallas to score away from home, but there shouldn’t be any doubt about Seattle scoring, which makes a Sounders win and over 2.5 goals a very attractive bet. It’s only worth +125, but given that the Sounders have yet to win a home match with less than three goals in it, it seems a reasonable one.

But if you do want to trust the Dallas offense, you’ll get much better odds going with a Sounders win and both teams to score at +200. Dallas has only managed seven road goals, but the Toros will have to take chances if they fall behind and should be able to push forward.

Finally, until Vegas wises up and stops giving plus money on a goal from a man who’s scored eight goals in seven playoff games, keep taking Raul Ruidiaz to score at any time. Ruidiaz is +115 to score despite what he’s done, and the Peruvian clearly has a nose for big games. Count on him scoring at some point.

These teams tend to produce a lot of goals when they meet, Dallas’s struggles notwithstanding. Seattle’s defense is almost sure to screw up once, leaving the big question of how many times can the Sounders get through the Dallas defense and make up for that one goal.

I think they can get three as Dallas gets desperate. 3-1 worked for the Sounders last time against LAFC, and I’ll back it again here, this time at +1150. Note: Imagine how much money you’d save if you made your bets at a sportsbook where they offer discounted odds on everything you bet! You would save THOUSANDS of dollars over the years! Start enjoying discount pricing on odds TODAY at BetAnySports Sportsbook! We’ve advertised them for 10 years with ZERO complaints!