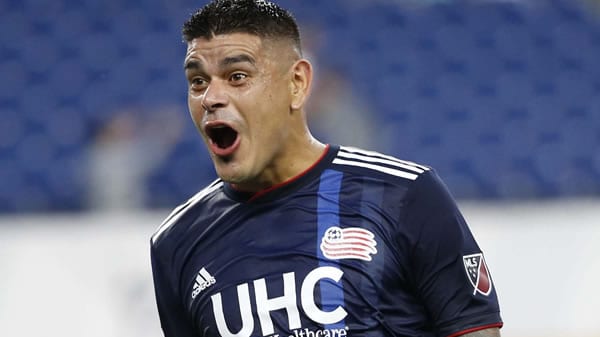 The Red Bulls lost 1-0 at Philadelphia; the Revolution defeated D.C. United 2-1 on the road.

Two of the least productive offenses in MLS meet in what shapes up as another low-scoring affair. New England might be struggling to score goals, but the Revolution are at least getting results, as Bruce Arena’s side is now unbeaten in its past six regular-season matches despite scoring just five goals in that stretch.

The same can’t be said for the Red Bulls, who have now seen one side shut out in each of the last five matches and have lost three of those matches. New York has managed to ride its defense into a playoff place, but the Red Bulls can’t get by with an offense that doesn’t threaten anyone forever. Can they finally string together some momentum, or will Revolution make it seven straight regular-season matches without a defeat?

WAGERING ON GAMES AT REDUCED ODDS SAVES YOU MONEY (BIG MONEY) DUMP YOUR OVERPRICED SPORTSBOOK/BOOKIE AND START REAPING THE BENEFITS AT 5DIMES!

It’s hard to believe that this was the same RBNY side that started the season so aggressive. There were goals galore in the first two RBNY matches of the year, as the Red Bulls and their opponents combined to put seven in the net before the pandemic hit.

Since the pandemic, the Red Bulls’ offense has been missing in action. The past five matches for RBNY have featured a combined seven goals, with just two of those coming from the Red Bulls. Even when RBNY did find the net, it wasn’t because of great attacking skills. In a win over Atlanta, New York scored within five minutes and spent the rest of the match content to play for a 1-0 win, while its win over New York City came because NYCFC keeper Sean Johnson misplayed a ball and allowed it to bounce just over the line for the match’s only goal.

Here’s how bad it’s become for the Red Bulls attack: their forwards have a combined zero goals in seven matches in 2020. Meanwhile, defender Kyle Duncan has put home two of the Red Bulls’ six markers. It’s nice to have a defender who can score, but when your leading scorer is a member of your back four, you’ve got some serious problems with your strikers.

This was supposed to be the year that Carles Gil and Gustavo Bou picked up where they left off, forged a cohesive partnership, and guided the Revolution into the top four in the Eastern Conference. Bou has been as good as advertised, scoring twice and establishing himself as a player who can change the match at any point. Gil was heading the same way until he injured his Achilles tendon against D.C. United in Florida, sidelining him until at least November.

Without Gil, the Revs’ attack has often looked lost. In its first three matches after losing Bou, New England didn’t find the net once, taking a pair of scoreless draws against Toronto and Philadelphia and losing 1-0 to Philadelphia in the round of 16 at the MLS tournament. The good news is that Bou and Teal Bunbury seemed to be on the same page against D.C. in their last match, and the Revolution attack looked much improved. Along with Adam Buska, the Revs still have enough pieces to create an attack that can make life difficult for the Eastern Conference if they’re all on the same page. If New England has things figured out on offense, good things are likely to follow.

I’m not sure what the oddsmakers were thinking when they put this total on the board. To me, this match screams under, as these are two of the least productive attacks in MLS, both sides can play solid defense, and there’s a massive thunderstorm heading for Foxboro this weekend. Massachusetts is supposed to get close to an inch of rain between Friday evening and kickoff, which could turn the pitch into a royal mess.

Because of that, I really like taking under 2.5 at +115, and I wouldn’t stop there. I think there’s a lot of value in taking New England to win this match and under 2.5 goals, which pays out at +475. The Revolution are unbeaten in six for a reason: they’ve only allowed two goals in five matches, and both came from the same D.C. United side. With RBNY struggling badly upfront, I can easily see New England getting its fourth shutout of the season. I don’t expect more than two goals from the Revolution, especially on a wet field, so I wouldn’t bother taking them to win to nil.

If you’re worried about whether New England can score on a wet field, you’ve still got options. First, you can back under 1.5 at +300. Or you can go for the Red Bulls to fail to score at +225. Either one gives you an excellent chance at returning more than double your stake without having to worry about the Revolution attack.

As I’m sure you’ve figured out, think low, lower, lowest for this matchup. Only 11 goals have occurred in seven New England matches, lower than anyone in the East except New York City. A scoreless draw looks very attractive given that New England has shared the points four times in seven matches, but after the Revs got out of their funk at D.C., I think they’ve got enough in their attack to find the net one time. I’ll take New England to win this one by a 1-0 score at +900. Bet this weekend’s picks for FREE by jumping on a sweet 100% real cash bonus offer where you deposit anywhere from $100 to $300 and get a matching bonus of the same amount credited to your wagering account! Find this killer offer at MyBookie!