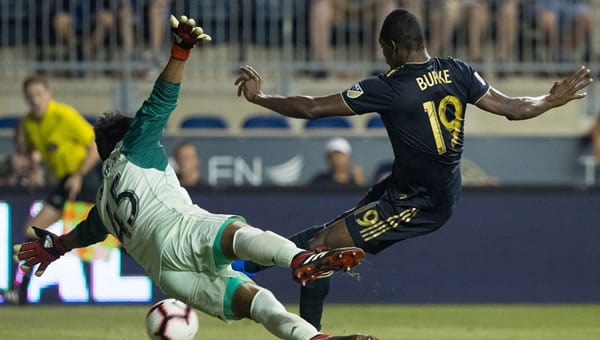 With most of the world focused on the Euros and Copa America, MLS returns to action with a rematch from the CONCACAF Champions League and a pair of teams hoping to build off what they did before the two-week break. Atlanta has picked up a result in each of its past four matches, but with only one win in that stretch, the Five Stripes will be hoping to go a little better and get themselves back above the playoff cutline. However, they’ve got to do so without Josef Martinez, who’s in South America competing for his nation.

That could open the door for Philadelphia to grab another road victory, which has been where the Union have excelled. Philadelphia hasn’t yet conceded on the road and has played great defense everywhere as of late, giving up just one goal in its past five matches. With Atlanta down its best goal scorer, can Union control the game and pick up another key result?

Giving up a lot of shots is just fine with Philadelphia as long as they aren’t quality shots, and that’s exactly what’s been happening during this shutout streak. In their win over the New York Red Bulls, the Union allowed 13 shots, but only one of them actually forced them to make a save to keep it out. D.C. United threw the kitchen sink at Philadelphia, but 10 of their 17 shots harmlessly went wide or over the goal, taking the pressure off.

NOTE: We’re starting to roll out NFL content! Be sure to bookmark our free football picks page!

However, history is not on the Union’s side here. Philadelphia has never won three consecutive matches on the road in its MLS history, nor have the Union ever given up fewer than two goals over any six-match span. The biggest reason for concern is that Philadelphia has to play without Jose Martinez, who is off in South America at the Copa. In their 2-0 loss to New York City, Philadelphia had to play without Martinez after earning a red card, and the results were disastrous, as the Union never once got a shot on target. Part of that was because Philly was down a man, but Martinez is an important piece of what Union does well on the attack, and without his services, Union could look like a very different side.

Atlanta United will be kicking itself for what happened in its most recent home match against Nashville because the Five Stripes had absolutely no business losing that match. Atlanta had a comfortable 2-0 lead in the final 10 minutes, only to watch Nashville pull two rabbits out of the hat and steal a point.

For Atlanta, that was a bit of a role reversal because the Five Stripes have usually been the ones who have pulled out a late marker to get something extra out of the match. In their draw at Seattle, Martinez won a penalty to help Atlanta steal a point. In contrast, the win over Montreal was made possible because Marcelino Moreno found the target in the final minute of stoppage time. In Atlanta’s past four matches, a goal has been scored in the last 15 minutes by one side or the other, making this a side that you can neither count out nor feel safe with until the final whistle.

This will likely be a low-scoring match with both teams missing key players, so I think the best bet on the board is to take the under. These teams finished tied at one last time, and even though they’ve traditionally played higher-scoring matches, these teams are playing at a slower pace right now and should be much more defensive-oriented.

But we don’t settle for laying juice, so I’d take a shot on Philadelphia on a draw no bet at +115. I think the Union are the stronger side, but a draw is a likely outcome given what these teams have done as of late. If you do want to get aggressive, I’d take a shot with the draw and might even play for a draw and both teams to score at +320. Three of the past four meetings have finished with one side getting shut out, but Philadelphia’s defense will break eventually and is likely to do it here. However, if you’re worried about a scoreless draw, just playing for the draw is a sensible option.

Atlanta has found a way to get something out of its past four matches, and I think the Five Stripes can do it again here. However, I don’t see there being much offense at all in this match. I’m going to bank on the missing players to lead to a low-scoring contest. Bet your soccer picks FREE for the next week by taking advantage of a 100% REAL CASH bonus on your first deposit of $100 to $1000 at BetNow Sportsbook!