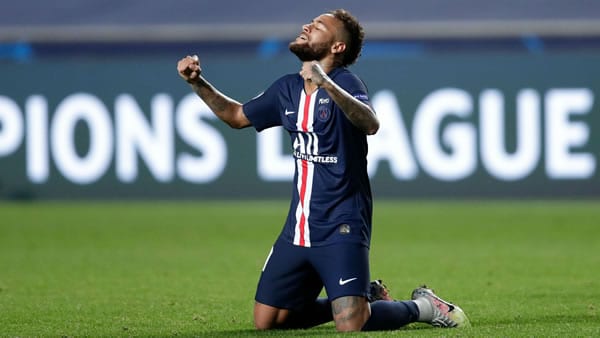 Get the best soccer odds at 5Dimes. (Pay less for the same bets!)

The most important match on the soccer calendar is finally upon us: the UEFA Champions League final. This is the most prestigious prize in club soccer, and it’s one of the richest as well, with an extra $22.4 million dollars going to the winning side. More importantly, someone’s going to make history here, as both sides are trying to complete a continental treble of winning their league, their national tournament and the European championship.

For French champion PSG, this is all new territory. The Parisiens have never competed in the Champions League final, and no French side has won the title since 1993, when Olympique de Marseille claimed France’s only Champions League crown by beating AC Milan. PSG is having its finest season in history by a mile, as it’s won every French trophy there is this season and hasn’t lost a match since February 18.

But now they’re up against what appears to be the strongest side in the world in Bayern Munich. Unlike PSG, which had its domestic season called off by COVID-19, Bayern returned to action in the Bundesliga and steamrolled the competition, winning all 11 matches they played against German opponents behind closed doors. Overall, Bayern has now won 20 matches in a row without as much as a draw. Included in that was a 1-0 win at Borussia Dortmund, which was the side that beat PSG on February 18.

If you remember France’s run to the title in the 2018 World Cup, you’re familiar with Kylian Mbappe, who announced to the world just how good he was with his performance in Russia. He’s now two years older and has established himself as one of the best players in the world at the age of 21, scoring 30 goals in all competitions for PSG this season.

Of course, the Frenchman is hardly alone. PSG features Neymar as his running mate and Angel di Maria as its playmaker, creating one of the most feared attacks in the world. There’s a reason that PSG scored 75 goals in its season in Ligue 1, and it’s not just because the French league is considered a small step below the Premier League or the Bundesliga. This team can score goals and has only been shut out once in 2020. Even that gets a bit of an asterisk, as it was in the Coupe de la Ligue final, France’s less prestigious tournament, and Mbappe didn’t play.

PSG’s also no slouch when it comes to defense, as it’s allowed just one goal in five matches since it was allowed to restart. That marker came against Atalanta, the most prolific offense in Italy’s Serie A. But as good as they are, neither Atalanta nor any of the opponents that PSG has seen this year are in Bayern’s class at finding the net.

As always, Bayern is built around three men: goalkeeper Manuel Neuer, striker Robert Lewandowski and talisman Thomas Muller. Lewandowski is having a season for the ages, scoring 55 goals this year, including 15 in Champions League play. If he can get a hat trick in this match, he’d pass Cristiano Ronaldo for the best performance in the Champions League of all time.

He’ll be shadowed by Brazilian defender Thiago Silva, who is playing his final match for PSG and faces by far the toughest assignment he’s ever battled in a PSG shirt. But as great as Lewandowski is, it’s Muller who PSG really have to worry about. Muller is the creator for Bayern, and when the ball is at his feet, good things usually happen for the Bavarians. There’s also Serge Gnabry to worry about, as he’s been on a tear since coming to Portugal. In two matches in Lisbon, the 25-year-old has found the net four times.

I can’t go against Bayern here, and I’ll gladly take even money to back the Bavarians. However, I think that we can probably do even better if you’re willing to take the risk. PSG doesn’t get shut out, and with Mbappe and Neymar on the pitch, I think they’ve got the attack to find the net at least once if not twice. I love a Bayern win and both teams to score, which will pay out at +180. Still, you can probably do even better than that, as taking Bayern to win and over 3.5 goals will pay out at +240. Given the quality of these offenses, I don’t expect there’s going to be any shortage of goals here.

In fact, I’d play both teams to score in the first half, which is paying out at +190. I think the style of play will lend to an open match where both sides have chances, and I can see this match featuring two or even three goals in the first 45 minutes.

For players scoring, I want Gnabry to score any time at +150. I’d even be willing to take him to open the scoring at +500, as he’s really played great in Portugal and looks really comfortable in this tournament. I also like Muller to find the net at +200. These kinds of matches lend themselves to people who have been there before, and Muller is both a big-game player for Bayern and a World Cup hero for Germany. If opportunity presents itself, he will find it.

This has all the makings of a classic. PSG have been brilliant all season and will win a European title sooner rather than later. But right now, I think they’re a step behind Bayern. I expect the goals to come early and often in a thrilling match, and I will back Bayern to cap off an unbelievable season with a 3-2 win over PSG. Bet your soccer picks for free this week by taking advantage of a 100% real cash bonus offer on your first deposit of $100 to $250 at BetNow Sportsbook!