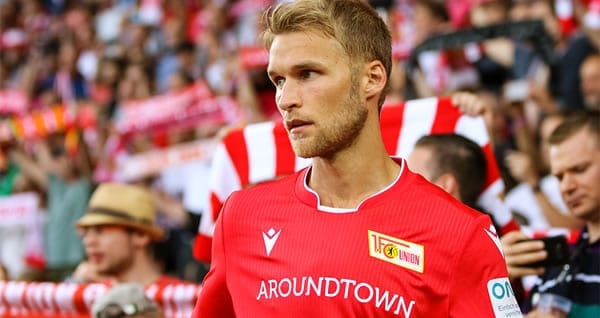 It’s derby day in Germany’s capital, as West Berlin and East Berlin battle on the city’s west side. Hertha returned following the layoff looking better than it had in a while, as it appears to have responded well to new boss Bruno Labbadia. Union, on the other hand, gave a credible effort on the defensive end of the pitch against Bayern Munich and displayed some attacking soccer, but never really came close to finding the goal that would have threatened the champions.

This year marked the first time that the Berlin Derby has been played in the top level of the Bundesliga, as Union Berlin’s promotion marked the first time that a squad from East Berlin has played in the top league. It’s a relatively new rivalry given that the teams never played from 1945 to 1990 because of Germany being a divided nation. However, it’s still a passionate one, which should make for a thrilling matchup.

Say this for Union: it’s not going to back down from anyone. The Iron Ones were clearly outclassed against Bayern Munich, but they did make the champions work for their victory at home. Bayern only scored once in the run of play (OK, twice, Thomas Muller’s offside goal in the first half probably should have counted), and that’s a testament to how well the Iron Ones were able to play defense.

But on the other side of the coin, Union honestly looked lost trying to attack the Bayern net for most of the match. That can’t be blamed on leading scorer Sebastian Andersson’s absence, because the Dane entered in the 70th minute against Bayern and Union came no closer to ever finding a real breakthrough on the attack. Whether it was because of facing the champions or because of a two-month layoff, Union looked to be out of ideas rather quickly in the second half.

That can’t repeat against Hertha, and it probably won’t happen, given that Andersson has a few days to get fully fit and the fact that this is a rivalry match. Union’s going to throw everything it has at its rival because this match would make their season.

The fact that Hertha is sitting comfortably mid-table instead of fighting for its life is a testament to the players, given the royal mess that leadership has been this year. Incredibly, Hertha is now on its fourth manager of the season after Bruno Labbadia took over following Jurgen Klinsmann’s disastrous ten weeks in charge.

That makes it challenging to assess Hertha as a side, as the Old Lady spent nearly an hour bogged down before Hoffenheim’s Kevin Akpoguma put one in his own net to open up the match. On the one hand, the outburst suggests that this might be a different team under Labbadia, who brings plenty of Bundesliga experience and might offer some stability to a side that hasn’t seen any all year long. On the other, this still isn’t a side that has scored a lot of goals. Even with the outburst of three goals in each of their past two matches, Hertha has just 35 goals in 26 games. Plus, there really is no big-name scorer on this roster. Dodi Lukebakio is the squad’s scoring leader, and he’s managed just five goals on the season.

After watching Union Berlin in action and taking a good look at how Hertha’s goals occurred, I like this one to be a low-scoring affair. These are not high-scoring teams, nor are they squads who have a great attacking option, especially if Andersson is once again limited. I cannot see this match producing more than two goals, so I like the under in this matchup.

As for betting the match, this is a tough call to make. I would love to take Hertha on a double chance, but Vegas is too smart for that, making that bet a -300 line. There’s no way that I’m paying that much juice, so I’d lean toward the draw on this one if you’re willing to be risky. Hertha is likely to come back to earth against a defense that really made Bayern work, and Union’s attack could produce something against an opponent that isn’t as talented as Bayern. Plus, Union has managed to score in nine of its past ten on the road, including its visit to Bayern. Bet your Union Berlin vss. Hertha BSC pick for FREE by taking advantage of a GIANT 100% real cash bonus on your first deposit of $100 to $300 at one of the web’s biggest and best sportsbooks: MyBookie! You must use this special link to activate the special 100% bonus offer.

I wasn’t impressed with Union Berlin’s attack when I saw them Sunday, but playing Bayern Munich can do that to even the best of teams. I was impressed with their defense, however, and I think they can slow down Hertha after a performance that was a little too good last week. Maybe Labbadia was the answer for Hertha just like Hansi Flick was for Bayern, but it’s too early to tell that for sure.

So with that in mind, I’m going to go with a 1-1 correct score prediction, as I think these teams are evenly matched and will open this up just enough to see a couple of goals. I can easily see a scoreless match, but I think Union’s strikers do enough to get on the scoresheet this time. 1-1 feels right to me here.