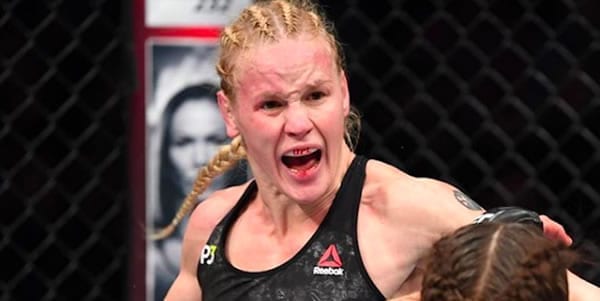 The UFC 247 card is a packed one, with good action up and down the card. With Jon Jones at the top of the bill as the UFC 247 Main Event, a lot of eyes will be on this event, giving a chance to other fighters on the card to shine in a high-profile spot. The co-main event features a women’s UFC Flyweight title fight between champion Valentina Shevchenko and challenger Katlyn Chookagian. Also on the card, heavyweight slugger Derrick Lewis takes on Ilir Latifi, who is making his heavyweight debut. Let’s break it down!

Valentina Shevchenko defends her UFC Flyweight title against Katlyn Chookagian in UFC 247 in Houston. Shevchenko is making the third defense of her 125-pound belt, coming off defenses in June and August of last year. One of the more-accomplished female fighters in history, she will be a major handful for a newer face on the scene in Chookagian, who zoomed to the top of the ratings with 2019 wins over Joanne Calderwood and Jennifer Maia.

Shevchenko, 31, has been a pro boxer, a pro kickboxer with a 56-3 record, and now is in the midst of a wildly-successful MMA career. She is on a run of four straight wins since a split decision loss to the bigger Amanda Nunes for the 135-pound belt. Since 2010, Nunes is the only woman to get the better of Shevchenko, which carries no shame, as Nunes has the scalp of virtually every big-name woman fighter ever. Shevchenko is surgical with her striking, as her track record would suggest. But with seven submission wins, she is also a handful when things go to the ground. And for the purposes of this fight and the dynamics of this particular matchup, having gone the 25-minute distance, a handful of times really helps. And Shevchenko has done it on the big stage, whereas Chookagian’s lone 5-round bout was in a regional promotion.

A pro for 4.5 years, Chookagian has some interesting dimensions for an underdog, the main one being her improvement. We don’t know what her ceiling is. She has some range at 5’9,” and both of her losses were by decision. Some might cast aspersions on the basis of losses to Liz Carmouche and Jessica Eye, good fighters who are a step below UFC championship level. She also has just three stoppage wins in her 15 fights and none since she has joined the UFC. Then again, there are any number of top fighters who had some bumps on the road to glory.

I’m not sure that Chookagian has the firepower to hold off Shevchenko. At these odds, you’re getting a rising force in Chookagian, a crisp and well-versed fighter who has a lot of upsides. And though she is also 31, she is probably the fresher fighter. But to beat Shevchenko, a lot more is required, and I just don’t think Chookagian is up-to-snuff. I’ll take Shevchenko

My Pick to Win: I’m betting on Valentina Shevchenko at -940 odds. The things that Chookagian does well, Shevchenko does better and in more-explosive fashion. Shevchenko’s superior firepower and skill, not to mention experience, could very well result in Chookagian’s first stoppage-loss. Bet tonight’s UFC fights for free by taking advantage of a massive 100% bonus on your first deposit of $100 to $300 at MyBookie!

In what promises to be a high-impact heavyweight showdown, contender Derrick Lewis takes on former light heavyweight contender Ilir Latifi. Lewis, 34, has been with some exceptional company lately, fighting for the title a few fights ago, while taking on some of the best big men in the business of late. He is coming off a decision win over Blagoy Ivanov in November, which put a stop to a two-fight skid. He now faces a tough battler in Latifi, 36. The 7-year UFC vet is in his first fight at heavyweight poundage in the UFC, after an up-and-down spell at 205 pounds, where he often looked devastating, while never really getting over the hump.

The mere dimensions of these two fighters bear discussion. Lewis has about a half-foot in height and reach on Latifi. And for a guy making his heavyweight debut, Latifi will be facing a guy who usually presses the outer limits of the division’s 265-pound limit. And while not built like a spartan god, Lewis is the significantly bigger man. Latifi is a squat 5’10,” which might be pushing it truth-wise. He has muscles on top of muscles and was always pretty ripped at 205, suggesting he can carry the extra weight with ease. He actually started his career at heavyweight, though at an entirely different level. He’s been a light heavyweight for over a decade, and this is in effect his debut. And this isn’t like a welterweight moving up to middleweight. Latifi will be seeing a massive heavyweight on the other side of the octagon.

Lewis is not invulnerable, however. Sure, he has enjoyed some dramatic success in the octagon, where his willpower and heavy hands shot him right into a title opportunity. If you aren’t a top guy, he’s probably going to get you. Though it was an awful fight, he holds a win over Francis Ngannou, and his last-second KO of streaking contender Alexander Volkov won’t soon be forgotten. But some of the bigger names on his ledger were past their prime, and with some split decisions, close calls, and losses to the cream of the crop, he is as good a choice as anybody is you were looking to call out a top five-ish contender. Let’s face it, Lewis isn’t always in tip-top shape, and though he’s scored KOs late in fights, his lack of cardio has betrayed him before.

Working at range could suit Lewis. Having faced all of the giants of the division, fighting a shorter guy not named Daniel Cormier could suit him. Latifi will have to withstand some massive incoming fire. And while the smaller underdog is versatile and occasionally explosive, Lewis has navigated himself pretty well through a demanding roster of heavyweights who have even more striking and submission menace than what Latifi represents. Lewis might have more appeal as an underdog from a betting perspective. He’s always a little dicey, and it’s hard to lay a number on him, but to stay in the mix, he really needs this one, and I see him finding a way to the winner’s circle. I’ll take Lewis.

My Pick to Win: I’m betting on Derrick Lewis at -280 betting odds. Latifi has a certain appeal in this underdog role, but this is really a different look for him against the far more-robust Lewis. More than just a slugger, Lewis is pretty cagey in mooting his opponent’s strengths. I see him drawing a line in the sand early, as he muscles his way to a win over Latifi. Bet your UFC predictions for FREE tonight by taking advantage of a massive 100% REAL CASH BONUS at MyBookie! Simply deposit $100 to $300 and they’ll match your deposit amount with extra bonus cash! Must sign up through this link and use bonus code PREDICT100.