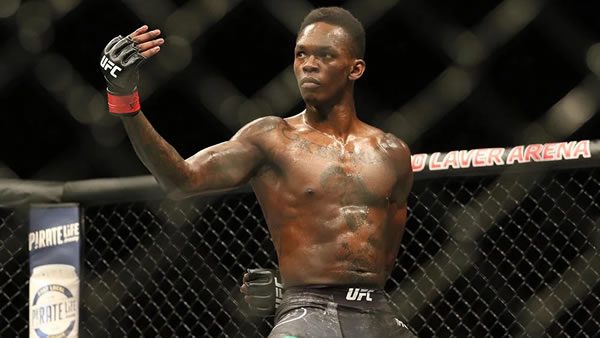 UFC 276 is a big card coming out of Las Vegas on the 2nd of July, featuring two world championship encounters on the same night. In the main event, UFC Middleweight Champion Israel Adesanya battles tough contender Jared Cannonier for supremacy at 185 pounds. In the co-main event, we will see the third fight in what has been a riveting rivalry between UFC Featherweight Champion Alexander Volkanovski and the man he beat for the belt in Max Holloway. Let’s start breaking down what might be a historic night of fights from T-Mobile Arena on Fourth of July weekend!

Israel Adesanya takes on Jared Cannonier with the UFC Middleweight Title at stake in the UFC 277 main event. Adesanya got back in the win column, maintaining his unbeaten record at 185 pounds, following an unsuccessful run at the light heavyweight belt. His win over Marvin Vettori in June of last year was important and his February decision rematch win over former champ Robert Whittaker showed that he’s still the tops at middleweight. And while one could say the loss to Blachowicz showed he’s not unbeatable, lifting his middleweight belt won’t be easy.

Six years Adesanya’s senior at 38, Cannonier was a little late coming into the sport, only joining the UFC ranks after his 30th birthday. And perhaps some of his results reflected this, as Cannonier began at heavyweight, eventually paring down to light heavy and then middleweight. And maybe he was ill-prepared to take on terrors like Glover Teixeira, Jan Blachowicz, and Dominick Reyes, losing all three fights. At some point, however, Cannonier started taking to the higher stakes and in his last six bouts, all against quality 205-pounders, he has won five of those fights.

Most impressive in Cannonier’s recent stretch is the variety he has shown. Able to win a protracted five-round battle against Kelvin Gastellum, he disposed of contender Derek Brunson with elbows, used his hands to quell Jack Hermansson, while his leg kicks ruined Anderson Silva. But his naysayers have some ammo, as well, namely his handful of defeats to ranking UFC middleweights and light heavyweights, most recently an October 2020 loss to Robert Whittaker, who Adesanya defeated twice.

It’s just not easy to see what Cannonier does better. Maybe from a wrestling standpoint, he could have the edge, but Adesanya’s takedown defense has been good against anyone not named Jan Blachowicz. If Whittaker couldn’t do it to the champion, Cannonier likely won’t, either. The challenger might have a power edge, but he’s fighting the best kickboxer in the UFC, so the idea of him trading shots with the champion doesn’t bode well, either. The way it seems to break down is an easy win for Adesanya. I’ll take the champion in this one.

My Pick to Win: I’m betting on Israel Adesanya at -360 betting odds. The champion is younger, faster, busier, taller, has a greater reach, and has a better track record against the top dogs at 185 pounds. Not that Cannonier can’t win, but a winning plan based on maybe landing some big leg kicks or his power somehow surfacing against a vastly-superior striker seems like a narrow path to success.

In a well-anticipated trilogy fight, UFC Featherweight Champion Alexander Volkanovski takes on former champ Max Holloway in the UFC 276 co-main event. Their first two fights weren’t without controversy and in the last one at UFC 251, many observers thought the former champion won the fight. Let’s break down the third fight between the two best 145-pounders in the world.

Somewhat strikingly, Volkanovski is three years older than Holloway at 33. For a former longtime champion with almost a dozen years of UFC experience to be just 30 is downright jarring. But those waiting for Holloway to fade into the night might not have a ton upon which to base that theory. It makes sense that he would be waning, following over a decade of taking on the best featherweights, and even some lightweights. A onetime dominant champion, we started seeing Max in a less-glorious light. There was a weight-making melee against Khabib, a failed lightweight title grab against Dustin Poirier and then the two losses to Volkanovski.

But considering Holloway could have easily been scored to be the winner against Volkanovski in the rematch and how he has since looked against Calvin Kattar and Yair Rodriguez in conclusive wins, any notions of him markedly slipping might be ill-placed. Granted, it makes sense from everything we’ve seen in lower-weight MMA divisions that fighters are not as viable after a decade on top, but the evidence seems to point to a version of Holloway that is pretty close to his best.

Volkanovski can’t be underestimated. A former rugby player who was over 200 pounds, it’s not easy to go from that to the best 145-pounder in MMA. And even though he’s older, he’s more likely to improve than Holloway at this point. Subsequent defenses over Brian Ortega and the Korean Zombie show he belongs. And sure, he doesn’t dazzle like other fighters with his wrestling and reliance on a massive gas tank, but so far his formula for success has gone over pretty big in the UFC.

I see a lot of urgency setting in for Holloway, who knows that fair or not, another “L” here would make it hard for him to return to this spot. Something about these two will always make for a close fight. But maybe there’s some sentiment among the judges that they owe Holloway one. Even if not, I see Holloway and Volkanovski in another tough 5-rounder, with Holloway getting the nod this time.

My Pick to Win: I’m betting on Max Holloway at +155 betting odds. The value is there on the Bovada line (they let you bet the fight while it’s going on!) for a fighter who appeared to win last time and has done nothing in the interim to show that the third time will be any different. Bet your UFC 276 predictions for FREE by scoring a 100% real cash bonus on your first deposit up to $500 when you use bonus code PREDICTEM when signing up at Betnow Sportsbook!