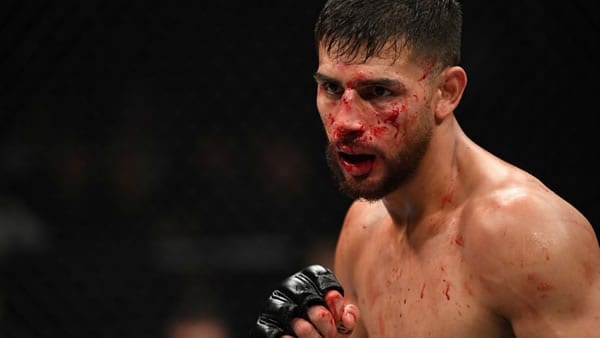 UFC Fight Night returns to Las Vegas with a featherweight main event that should draw a lot of interest. Former Featherweight Champion Max Holloway will take another step toward reclaiming his crown when he takes on Mexican standout Yair Rodriguez. For Holloway, he’s still in the picture, a lot of people thinking he won the rematch in a title shot against current champ Alexander Volkanovski. A year younger than Holloway at 28, Rodriguez looks to make up for a frustrating last couple of years with what would be a big win that would put him in line for a title. Who can get the upper hand in UFC Fight Night: Holloway vs. Rodriguez?

Max Holloway, 22-6 (10 KOs, 2 Submissions), (-400) vs. Yair Rodriguez, 13-2 (4 KOs, 3 Submissions), (+300)
Max Holloway and Yair Rodriguez will get it on in a five-rounder held at 145 pounds on July 17. This is a big fight for both. Holloway, the longtime champ, looks to get back in a title fight. Some still think he should be champ. In January, Holloway showed he is still a factor with a nice win over Calvin Kattar. His opponent is a wildly talented fighter. Rodriguez has wowed audiences on occasion. But his career has been stuck in neutral for several years.

Holloway has also had his issues. First of all, it’s hard to remember a fighter with this much mileage on him who isn’t even 30 yet. He has certainly been through the wringer, taking on really tough fighters over the last handful of years. There was a bad weight cut against Khabib that set him back. Throw in a failed lightweight title grab against Dustin Poirier and the two losses against Volkanovski; it’s no wonder why people are questioning whether he’s still within that window of success.

Still, as far as being a viable featherweight at the highest levels, there is less than ample evidence that we should turn the page on Holloway. We’re still looking at a guy who is thriving at this weight, whether it be his five title fight wins, how good he looked against the current champ in their rematch, and how easily he beat the dangerous Kattar in January. Playing the game where you’re trying to time his demise could be a dangerous one to play at 145 pounds.

With Holloway, there is contrasting data. On the one hand, you saw a fighter who was getting better and better every time you saw him. He would always be building on his game while showing new wrinkles with each outing. But certain things started making his results less and less impressive. A big part of that is how the featherweight division became a lot better from the time Holloway won the title to what it represents now. Then with the thoughts of winning a lightweight title, it took some wind out of his sails, a damaging weight cut that went sideways against Khabib, then a draining decision loss to Poirier.

At least Holloway has been active. Rodriguez was active at one point, and around 2016, he was as hot of a prospect as you can find at 145 pounds. He was racking up eye-catching wins, winning awards, and capturing the attention of a fight press hungry for a new star at 145 pounds. Memorable knockouts of Andre Fili and BJ Penn followed, and it looked like he was on the fast track to a title shot. Then everything went wrong.

Rodriguez began to run afoul of the UFC brass. A series of fights were rejected by Rodriguez, who was given the boot from the company. He apparently repaired his ties with Dana White. Since returning, he scored perhaps the most memorable KO in division history with a literal last-second spinning-elbow knockout of Korean Zombie. An eye poke made his fight with Jeremy Stephens a NC, but a rematch a few months later resulted in a unanimous decision win for Rodriguez.

The problem is activity. Not to mention the fact that Rodriguez has continued turning down fights. Since May of 2017, he has fought a total of three times. That’s not really the best way for a fighter who is building his rep to proceed in his career. And there was a loss in 2017 to Frankie Edgar, a TKO loss against an aging ex-champ that doesn’t paint his prospects here in a great light. Between the inactivity and how he came up short against Edgar, it’s not easy to see how some are dismissive of him at this level.

At the same time, Rodriguez has big talent that can’t be denied. He has put together some highlight-reel stuff. He can hit a really high gear, and if he can pull an aging fighter like Holloway into a firefight, who knows? Then again, five rounds is a long time, and though Rodriguez thrived in the last round against Korean Zombie, this is a format more to the liking of Holloway, who is no stranger to the five-round distance.

I see Rodriguez as a compelling talent, but a more-dicey proposition overall. While he has shown offense that would suggest a championship-worthy fighter, his persistent bailing out of dangerous fights, his failure to vanquish an aging Edgar, and his general inconsistency could cost him against a super-steady force like Holloway. Holloway has proven time and again that he can stand up to what any 145-pounder has to dish out at this weight. If you feel that there is some underdog appeal in the +300 Rodriguez, that’s not indefensible by any stretch. And maybe since he could win more than one out of four fights between the two, it’s the better-value pick. I just see this urgent juncture of Holloway’s career to be a strange time to catch him sleeping. I see a high-caliber performance from Holloway, as he does enough to earn another shot at the belt.

I’m betting on Max Holloway at -400 betting odds. I think he’s simply the more bankable commodity in this context, a high-stakes five-rounder where a loss would be very costly. Rodriguez is a compelling talent, but Holloway’s experience, versatility, consistency, and professionalism should see him through.