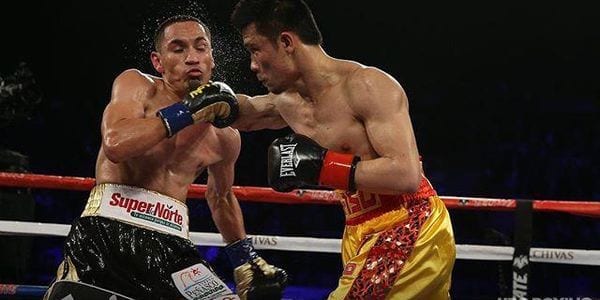 Srisaket Sor Rungvisai takes on Juan Francisco Estrada in a rematch for the World Super Flyweight Title at the Inglewood Forum on April 26. These are two of the best 115-pounders in the world, with their first match a barn-burner at this same building in February of 2018. It was a back-and-forth battle with Sor Rungvisai edging out a majority decision to stay atop the super flyweight ladder. This rematch almost can’t help but be a good fight, as these fighters play perfectly off each other to make for pleasing action. Let’s see what we can come up with for Sor Rungvisai vs. Estrada II.

This is really a Renaissance Period for the 115-pound division. And these are the defining fights that will determine the power of legacies. With Roman Gonzalez, and then Estrada and Sor Rungvisai, and others, there are a handful of high-profile super-flyweights fighting in big fights. And with the Inglewood Forum becoming ground-zero for the big fights in this division, fans in the US are starting to get behind it. The winner of this fight has any number of big-money opportunities looming around the corner.

More At The Forum: Jessie Vargas vs. Humberto Soto Pick

Sor Rungvisai is four years older than Estrada at 32 years old. He has been at 115 pounds his entire career, which started professionally back in 2009. Amazingly, he won just one of his first 5 fights—hardly the typical start of a career for a guy who rose to the top of his division. He has since won all but one of his fights in the past 9 years, falling to Carlos Cuadras in 2014. The hard-hitting Thai eventually got another shot at the big-time, being served as a sacrificial lamb to pound-for-pound entrant Roman Gonzalez, scoring a disputed upset decision, becoming the first to beat the 46-0 four-division champion. The rematch was far more-decisive, with Sor Rungvisai scoring a painful and emphatic fourth-round knockout. Since then, he has won three fights, including the decision win over Estrada last year.

Estrada turned pro at 18 in 2008. His first title shot came at 108 pounds to the aforementioned Gonzalez, as he lost a decision. In his next fight, he moved up and won the 112-pound belt with a win over Brian Viloria. He made a handful of defenses, before rising up to 115 pounds and beating former Sor Rungvisai conqueror Carlos Cuadras to set up the first fight with the Thai champion. He is a fine fighter, as he showed in the first fight with Sor Rungvisai.

——————
Note to Boxing Bettors: Winning as a boxing bettor is as much about WHEN you bet as it is WHO you bet on. Boxing odds are very volatile. Much more so than say, MLB money line betting, so getting a good ROI is the longterm goal. You do this by shopping and betting at the lowest margins! Yes we do need to win and want to win at a high rate but the win rate you NEED to hit depends on the value you get.
——————

It’s only appropriate they do the rematch at the same site as the original. The first fight saw Estrada get off to a fast start, with the Thai champion getting into a nice groove in the middle rounds. Estrada came on in rounds 9 and 10 to take the play away, before a two-round surge by Sor Rungvisai at the end turned things ever so slightly in his favor. This is a great pairing from a stylistic standpoint. Estrada is the better stylist and probably has better speed and volume at top gear. But the Thai is no slouch technically or in the speed department. He relies more on power, however, and is indeed a punishing fighter to face.

The first fight saw the fighters’ respective styles play well off each other. Sor Rungvisai is a little bigger, with a thicker upper body and bigger legs. His southpaw stance makes him that much harder to fight. He’s a calculating puncher who can switch gears seamlessly. He can launch sudden attacks and doesn’t have to wind up to launch a consequential shot. His hands are legitimately heavy from a natural standpoint. He doesn’t throw many jabs, with most of his punches being power-shots. Sor Rungvisai makes a big effort to go hard to the body. On top of that, he’s utterly durable and hard to deter. When fighting the likes of Sor Rungvisai, opponents have to resign themselves to the fact that it’s going to be a difficult and punishing evening.

Estrada did a good job the first time around, with the late-surge of Sor Rungvisai taking the play away at the end. He was able to use movement and range to lower the Thai’s punch-output before Sor Rungvisai started zeroing in better over the course of the fight. Though only an inch taller than his opponent, Estrada seems a lot more-angular. He is a tremendous technical fighter—stylishly throwing suddenly-launched shots. He works the body nicely and when in a groove, is deathly-accurate. His idol in the sport is another great Mexican technician in Juan Manuel Marquez and he took a page from his hero with the little steps back he takes before getting off a nice counter punch. Against Sor Rungvisai, he didn’t hide from the power, instead he acknowledged the strength of his opponent and acted accordingly.

It’s hard to not imagine another close fight where there is little to separate the two men. They’re that good and dependable. One could understand the notion that Estrada has more upside at 28 than the 32-year old Sor Rungvisai, who is getting a little long in the tooth for this low of a weight. And we saw what happened to the omnipotent Gonzalez, who looked unbeatable at 46-0 before the wheels came off against Sor Rungvisai. At the same time, at the end of the first fight when it was go-time, Estrada sagged a little bit in the midst of the Sor Rungvisai surge. And that doesn’t really coincide with the notion of a waning Sor Rungvisai.

Again, I see this being a close affair that can go either way. I see it as either a pretty even coin-flip, with the possibility that the Thai should be a mild favorite. With the Thai going off at -230, I think it overstates the case. At +180, there is substantial value here on Estrada, who came very close the first time around. A fighter like him is capable of a small improvement and I think he has a heck of a shot to come out the winner in this one. I’ll take Estrada.

I’m betting on Juan Francisco Estrada at +180 betting odds. I see him being better in the rematch, knowing what he’s up against this time. He indeed came very close the first time around and showed he can outbox Sor Rungvisai in stretches over a year ago. At this price, I think there’s a great chance he gets over the hump this time, though it won’t be easy. Sor Rungvisai is the real deal. I think Estrada is too.