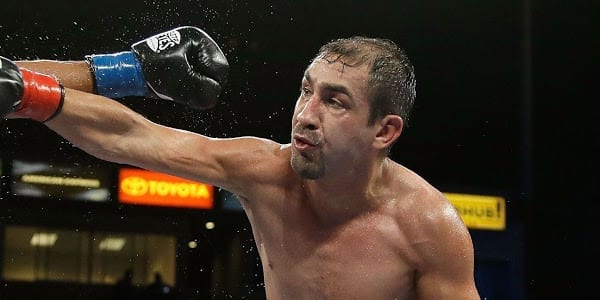 Jessie Vargas takes on Humberto Soto in a super welterweight ten-rounder on April 26 at the Fabulous Forum in Inglewood. The bout is the chief support of the Srisaket Sor Rungvisai vs. Juan Francisco Estrada rematch. It’s a battle of young vs. old, with Vargas 29 and Soto a well-traveled 38. We have seen Vargas in some recent high-profile fights, as he has fought names like Timothy Bradley, Manny Pacquiao, and Adrien Broner. Soto has been more off-the-radar, though he opened up some people’s eyes in his last fight—a dominant decision win over former champion Brandon Rios in February. His performance showed he still has some gas in the tank—even at this age and this weight.

Soto is a traditional Mexican warrior, now nearing the 22nd anniversary of his pro debut back in 1997. The 81-fight veteran has seen it all. He took a long time to round into form, not getting his first title shot until 2005, when he beat unbeaten Rocky Juarez for a belt at 126 pounds. He eventually moved up to 130 pounds and then 135 pounds, winning titles in those divisions, while putting together a long string of wins. From 2008-11, he was tough to beat and strung together some pretty big wins along the way. A 2012 stoppage loss to Lucas Matthysse at 140 pounds slowed him down some. He got back on the winning track, until a loss to Antonio Orozco in 2015 seemed to signal an end to his world-class run and what a long and successful run it was.

In the ensuing 3.5 years since the Orozco loss, Soto’s appearances became sporadic. But in 2018, he won two fights leading up to the Rios win. And let’s face it, a win over Rios doesn’t mean what it once meant. Just looking at Soto, he looks old—balding with loose flesh around his waist. It was still hard to not marvel at the fire he still has in his belly, as he completely schooled Rios with rapid-fire combinations and solid stamina shown over a demanding 12-round fight. Known as “the crafty little fox,” Soto is still viable after all these years. And he showed in his last fight that anyone looking to claim his scalp as an easy win better think twice.

Vargas is naturally the more-highly regarded ring-property with his youth and more-recent exposure to top opponents. That’s part of the reason he is such a big favorite. But Vargas is in need of a positive development. Despite some nice performances in spots, he is still looking at just two wins in his last 6 fights, going 2-2-2 in that stretch. The losses being to Pacquiao and Bradley helps make that better, but draws to Adrien Broner and Thomas Dulorme are more distressing. Going against top opposition, Vargas has hit a wall. Still, he carries certain advantages into this fight, with a big advantage in youth, ring-mileage, and size. Vargas will have a few inches in reach and several inches in height at nearly 6-feet tall.

Vargas was on a nice roll—unbeaten and putting together some nice wins before he ran into Bradley. But in nearly stopping Bradley late with the referee incorrectly stopping the fight early as Vargas threatened to stop Bradley, Vargas saved some face, even in defeat. And in TKO’ing unbeaten Sadam Ali in his next fight for a 147-pound belt, it restored some luster. Against Pacquiao, he was disappointing in losing a lopsided decision. A win over Aaron Herrera led to two straight draws and has Vargas needing something big moving forward to stay near the top of the pile.

There has been a bit of a schism in Vargas’ game of late, as he doesn’t use the best tactics. He seems to eschew his length and boxing ability by lying on the inside too much. That would seem to be an issue in this fight against the more-wooden and aging Soto, where a more-mobile approach would be the best route to victory. Vargas has stopped good fighters like Ali and nearly toppled the rugged Bradley, so it’s not like he can’t do damage. But with ten KO wins in 32 fights, power is obviously not his strong-suit. The more he lays in there with Soto, the better it is for his opponent.

If Soto were still on-point enough to win at this level, maybe Vargas isn’t the worst opponent. Vargas depends heavily on a right hand that doesn’t always do damage and creates openings for Soto’s still-dangerous left. Vargas isn’t very slick on defense and has trouble envisioning the best route to victory. There is a certain predictability to Vargas’ game that could be right up the alley of an aging fighter like Soto looking for a last hurrah.

The idea that Soto is yesterday’s news could be a correct one. And a win over a one-foot-out-the-door Rios hardly signals a Soto revival. Usually, fighters aren’t terribly viable at this low of a weight after 22 years as a pro and a handful of rises in weight. Soto is smaller and older—not typically a great equation when looking to make a winning case. But I can’t help but think that he has hit higher notes in his career, gets more out of what he has than Vargas, and is more-bankable from a mental standpoint. And with all his craftiness, I see him as being a decent value here at +425 against a fighter in Vargas who has become an undependable force in the ring as of late. I won’t pretend that Vargas’ size, youth, and more-recent exposure to top opposition won’t manifest at all. He is, after all, a big favorite and not without reason. I just see the erstwhile Soto having some upside at this rate and maybe worth a tickle at this underdog price. I’m going to put a little taste on Soto.

I’m betting on Humberto Soto at +425 betting odds. I think the hopelessness of Soto’s case is being overstated a bit. Sure, he’s above his best weight and it’s been a while since we saw him at this level. I just think there is some recent slippage from Vargas, which could create a crease for Soto to exploit his tactical problems. What Soto lacks in size and youth, perhaps he can make up for with craft, fight IQ, and veteran know-how.