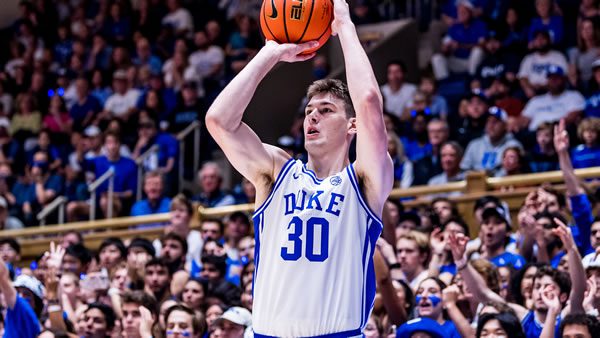 The Duke Blue Devils hit the road to take on the Virginia Tech Hokies on Monday night at the Cassell Coliseum. The tip-off is scheduled for 7:00 PM ET and can be watched on ESPN. The CBB betting board lists Vtech as a -2.5 home favorite, with the total line offered at 138 points.

The betting line opened at some shops with Duke a +1 favorite, but that line has moved to as high as Virginia Tech -3 at sportsbooks. The O/U line has been on the rise, with an opener of 134.5 now as high as 138.

Virginia Tech is coming off a loss to Clemson (51-50). Going into the game, the Hokies were +1 point underdogs, resulting in an ATS push. The combined 101 points did not surpass the 140 total line.

Duke
Over their last five games, Duke has a straight-up record of 3-2 while going 0-5 vs. the spread. Over this stretch, the Blue Devils’ offense averages 66.8 points per game while hitting 38.8% of their shots from the field. On the defensive end of the floor, they have allowed opponents to shoot 42.4% from the field while allowing 71.0 points per contest.

Virginia Tech
In their previous five contests, Virginia Tech is 0-5 straight-up and 0-4-1 vs. the spread. In these five games, they have a scoring average of 64.8 points per game on a shooting percentage of 40.7%. Defensively, they allow teams to hit 44.6% of their shots while giving up 70.4 points per game.

How Does Duke Fare On The Road?

For the season, the Blue Devils have played seven road games and have a record of 3-4. In these contests, Duke is 2-5 vs. the spread. Offensively, they have averaged 65.7 points per game on a shooting percentage of 41.7%. On defense, the Blue Devils are allowing 71.7 points per contest when playing away from home. So far, opposing teams have a field goal percentage of 43.8% in these games.

How Does Virginia Tech Fare At Home?

For the season, Duke is averaging 80.2 points per game (13th) while posting an overall field goal percentage of 48.9%. In today’s game, they will be matched up against a Virginia Tech defense that has allowed an average of 65.6 points per contest. This year, opponents have hit 41.8% of their shots vs. Virginia Tech. On the other side, the Virginia Tech Hokies are coming into the game averaging 70.7 points per game on a shooting percentage of 47.0%. The Hokies will be facing a defensive unit allowing an average of 63.5 points per contest. So far, teams have hit 41.0% of their shots vs. the Blue Devils.

From beyond the arc, Duke has a shooting percentage of 36.8% while ranking 332nd in attempts per game. The Blue Devils will be facing a Virginia Tech defense that has a 3-point field goal shooting percentage allowed of 30.6%. Virginia Tech enters the game having hit 39.3% of their looks from deep while averaging 9.0 made 3’s per game. On the other end, Duke has allowed opponents to hit 29.2% of their shots from beyond the arc.

Both of these have been bankroll killers. The Blue Devils have covered just one game in their last eight, and the Hokies have seven consecutive point spread losses. That said. I’m comfortable laying the small number on Virginia Tech. The Hokies return from a three-game road trip to home sweet home, where they are 8-2, with the two losses being by 4 to NC State and by 4 to Clemson. Duke has been on the improve but is just 1-3 in true road games. Things go VTech’s way tonight. Take the Hokies -2.5. Bet your college hoopsl picks for FREE this week by scoring a 100% real cash bonus on your first deposit up to $500 when you use promo code PREDICTEM at Betnow Sportsbook!