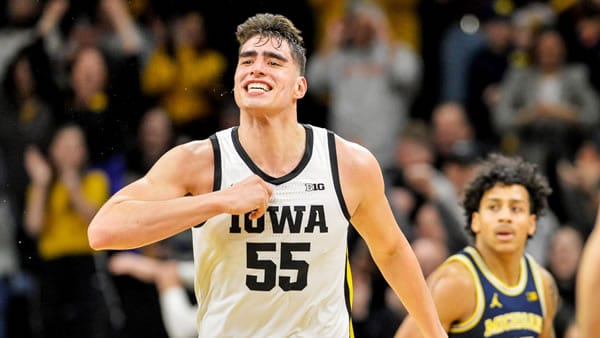 The days of Rutgers being a pushover in the Big Ten are long over; the Scarlet Knights are now a truly feared team in this league. The trip to New Jersey has long been seen as a trap in the Big Ten because Rutgers is difficult to defeat at home no matter how good the Scarlet Knights were, but now Rutgers seems to have the kind of team that can actually challenge for a league title.

If they want to win the Big Ten, they’re going to have to go through Iowa, which has justified the hype all season and has its sights set on going well beyond just the Big Ten. The Hawkeyes’ game has been all about offense, offense, and more offense, and they’ve done it to the tune of 94.3 points per game. That’s not the way Rutgers usually likes to play, but the Scarlet Knights have already shown they can play as fast as they need to when they took care of Illinois. Can they take down another league favorite?

Getting Jordan Bohannon back on track was a big step for the Hawkeyes, as they were able to cruise past Northwestern by hitting the gas in the second half and pulling away for a comfortable win. But the Hawkeyes’ big problem remains their defense, as Iowa could have had the game wrapped up much earlier if they could have slowed down the Wildcats’ attack.

Of the top 25 teams in the country, Iowa is the only one that ranks outside the top 50 in defensive efficiency (and the Hawkeyes aren’t even close, ranking 97th), which both emphasizes just how effective the Hawkeyes have been on offense and how dependent they are on their attack. Having Luka Garza down low allows Iowa to dominate on the attack in most situations, but with how little defense they play, the Hawkeyes leave themselves very vulnerable to a team that’s capable of keeping up with them on the scoreboard. Iowa is 8-0 when it holds the opponent to 80 points or less (which is why the over has cashed in eight out of 10 Iowa games this season), but in the two defeats, the Hawkeyes have given up an average of 100.5 points per game.

The big question for the Scarlet Knights is whether they’re going to have a fully healthy lineup. Ron Harper Jr. is usually the main man for Rutgers, but he picked up an ankle sprain before the win over Purdue and had to miss that game. Incidentally, the Scarlet Knights played better without him, as their shooting improved to 50 percent against the Boilermakers after shooting just 41 percent against Ohio State.

If Harper isn’t able to play, look for Rutgers to turn to Montez Mathis again. Mathis had a career-high 25 points against Purdue and has been a reliable scorer all year, and he’ll have to be if Rutgers is going to keep up with Iowa. The loss of Harper would mean Rutgers would be down its leading scorer and its No. 2 rebounder, not a combination that you want when facing Iowa.

Empty possessions. The pressure is on both teams to ensure that there are as few empty possessions in this game as possible because neither is well equipped to stop the other. Rutgers doesn’t really have the personnel to stop Garza inside, and Iowa doesn’t play defense well enough to stop the Rutgers guards. That means a lot of points are likely, and both teams have to make sure that each trip down the court ends with the ball in the basket. Turnovers aren’t likely to be a factor because both teams take care of the ball, but rebounding could play a significant part in deciding who wins this one.

The Hawkeyes can get Garza established on the glass. The big man only grabbed six rebounds in the Hawkeyes’ most recent game, and Iowa can’t afford for him to have another quiet night on the glass. Garza will score and score a lot, but the lack of defensive ability from Iowa means that Rutgers’ possessions are likely to end either with the ball in the basket or in Garza’s hands. If it’s not the latter, Iowa might need 90 to win this one.

Rutgers will Cover if:

The Scarlet Knights can play well enough on the perimeter to frustrate the Hawkeyes. Iowa depends a lot on its guards, and Rutgers has the ability to disrupt their rhythm and create some long rebounds, which would give them a chance at getting the rebound. The Scarlet Knights are not good at creating turnovers, so the next best option is forcing Iowa to miss and getting a long rebound, as opposed to one Garza can quickly stuff home.

Without Harper, it’s hard for Rutgers to pull off a cover against a team this talented. Rutgers is a very good team, but Harper is the one who brings them to the next level. Without him on the floor, I can’t see the Scarlet Knights keeping up with Iowa. This looks like it’ll go over, and I think the Hawkeyes take it. I’ll eat the small chalk with Iowa here. Bet your college basketball picks FREE this week by cashing in on a huge 100% REAL CASH bonus on your first deposit of $100 to $1000 at BetNow! The biggest bonus ever offered by a legit online sportsbook!