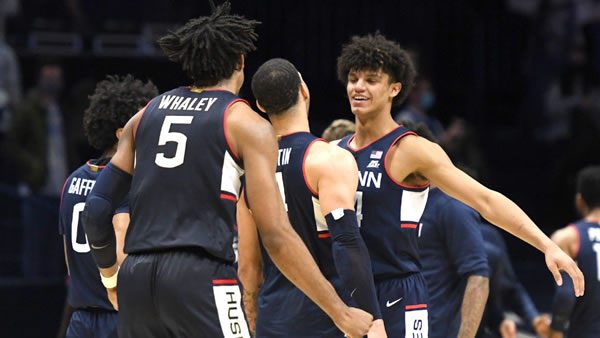 New Mexico State
N Mex State has no reported injuries at this time.

The New Mexico State Aggies come into this matchup with an overall record of 27-6. On the season, the Aggies have performed well in their 14 non-conference games, posting a record of 12-2. In addition to their non-conference record, New Mexico State went 4-1 at neutral sites. Heading into this matchup, the Aggies are looking to stay hot as they try to add on to their current 3 game win streak. This includes winning the WAC Conference Tournament Title.

Connecticut enters this matchup vs New Mexico State, having played 27 games as the more efficient offense and defensive team. In these contests, they have posted a record of 20-7. Through 32 games, the Huskies are averaging 75.0 points per 70.0 possessions (NCAA Average), compared to 72.0 for the Huskies. In these situations, Connecticut has an average scoring margin of 12.0 points. On the other side, the Aggies are 1-1 as the inferior team on both ends of the court. In these 2 instances, they hold an average scoring margin of -12.0.

On the season, the Aggies have been a balanced scoring unit, with 31.5% of their scoring coming from made three-pointers. Even though Connecticut is only near the NCAA average in percentage of points from outside, it is still more than the Huskies. So far, just 29.7% of their points are coming from three-point shots. In terms of efficiency, Connecticut has been the more efficient team, connecting at a rate of 35.3%, compared to New Mexico State at 32.8%.

New Mexico State played really well away from home this season (13-4), but when you look at average power rating of opponents and see NMSU 69.1 and UConn 81, that stat becomes irrelevant. It’s UConn or nothing for me here, as the Aggies will likely be overmatched by a team with much more experience and much better players. Bet your Aggies/Huskies pick and ALL your March Madness bets for FREE by taking advantage of a 100% real cash bonus on your first deposit of $100 to $300 at MyBookie Sportsbook when you use bonus code PREDICT100 on their registration page!