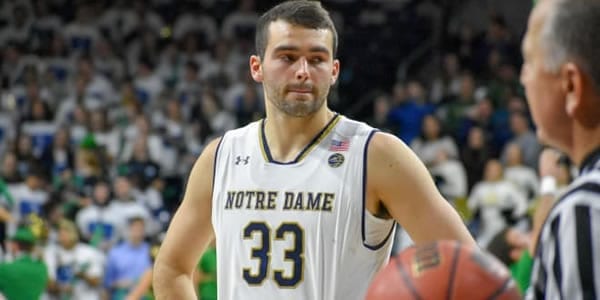 Notre Dame failed to make the postseason play and ended its season with a loss to Louisville in the ACC tournament’s second round. North Carolina ended its year in the Sweet 16 with a loss to Auburn.

If experience matters in the slightest, Notre Dame will keep this game a lot closer than people think, and they could win it outright. The Irish bring back four experienced seniors in the starting lineup, and none are more important than Forward John Mooney. Not only does Mooney have the ability to score from anywhere, but he’s been a decent ball distributor to this point in his career. He can get the ball to anywhere where a teammate might be available, making for a good inside-outside game.

Things should get better with the ball movement as well, as Rex Pflueger should be back on track after missing all of last year’s ACC slate. The Irish aren’t a great rebounding team, but this game could change that, as Carolina will be searching for which pieces go where and might struggle on the glass.

The Heels are going to be talented as always, and headlining that is guard Cole Anthony. Anthony is going to come in inexperienced, which isn’t a good thing against the likes of a veteran squad. The biggest question for the Heels is whether Roy Williams has had enough time to impress upon his younger players the difference between high school and playing against ACC competition. Usually, the Tar Heels would have a game or two of experience under their belt before they get to see what life is like in league play. This time that could be an issue from the beginning.

Age and maturity. Notre Dame is going to be counting on its talent, first and foremost, so North Carolina needs to get the most out of being a year older than its competition and making the most of its chances. The Heels are about to face an experienced opponent that wants to prove itself to be championship-caliber, and that could be a real issue.

Notre Dame Will Cover If

The Irish show that they’ve learned from the program’s collapse last season and are ready to play at a top-level. If they’ve learned from the past, they’ll give North Carolina a major headache from start to finish and keep this game tight. They showed that they could play with Carolina in Chapel Hill a year ago, even in the process of their collapse, so the ability to play at that high level is there. It’s just a matter of executing and avoiding getting intimidated by the atmosphere at Carolina.

North Carolina Will Cover If

The Heels minimize the risk posed by outside threats. The 3-point shot is the great equalizer in college athletics these days, and if the shots are dropping the way they should, the Heels are going to be difficult to defeat. Given that I don’t think Roy Williams has had enough time to educate his squad on the finer points of defense, I think that’s a problem.

Picking these early games is never easy because you’re dealing with a bunch of unknown factors. It’s hard to get a read on anyone before you’ve seen them in action, and you can’t tell much of anything from what you see during the exhibition season. Just because someone looks great against Division II players is no guarantee that will continue during the regular season, and it’s just as true that a poor start doesn’t mean that a player can’t recover.

In this case, I think Notre Dame is getting severely undervalued here. The Irish were nowhere near as bad as their record a season ago, and they didn’t get blown out when they came to Chapel Hill. Plus, they’re a veteran squad that has done this before and wants to put the disaster of last year in the past.

Because of that, there’s an opportunity here, and I think I’m going to go with the underdogs here as a result. Give me the Irish in this matchup.