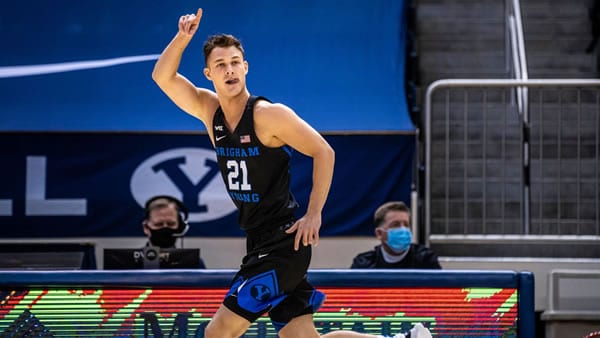 The non-Gonzaga half of the WCC bracket sees one team that’s trying to return to the NCAA tournament for the first time in 19 years against one that’s been a lot more successful and is probably already safely there. It’s easy to forget now, but Pepperdine was once the premier program in the WCC (never to the level of Gonzaga’s success), routinely qualifying for NCAA tournaments and occasionally making a run in the Big Dance. But Pepperdine hasn’t qualified for the NCAA tournament since 2002, and barring a run here; they’re not going to change that this season.

BYU, on the other hand, has likely done enough to secure its spot in the field. A run to the finals could get the Cougars to the No. 6 line, putting them in prime position to make a run at the Sweet 16. The Cougars were the only team in the WCC to even challenge Gonzaga, and they’d love nothing more to get a chance at taking down the Bulldogs in the championship game. But first, they’ve got to get through Pepperdine, and that’s a bigger challenge than it sounds like. The Waves were the only non-Gonzaga squad in the WCC to defeat BYU this year, earning a 76-73 win in the teams’ second meeting of the year. Which team can get itself into the finals and likely get that shot at No. 1?

The big difference between the two matchups between BYU and Pepperdine was that Colbey Ross and Kessler Edwards got some help in the second meeting from the likes of Sedrick Altman and Jan Zidek. Ross and Edwards are the main cogs in the Pepperdine attack, but they aren’t good enough to completely take over a game the way a team like Ayo Dosunmu and Kofi Cock-burn are for Illinois. Getting other shooters going and taking what a defense like BYU is willing to give makes a world of difference toward making the entire thing run properly.

Pepperdine’s ideal situation is to start running early and force the opposition into mistakes, which gives the Waves more chances at getting good looks at the hoop. Pepperdine got off the same number of shots against BYU in both games, 66, but the Waves hit nine more in the win in Malibu than they did in the loss in Provo. When Pepperdine is able to get good looks at the basket, it tends to get so many opportunities that good things usually follow.

BYU can win with offense or defense, which has made the Cougars rather dangerous in the WCC. An ideal game for BYU isn’t always attractive, but it features stern defense and several trips to the free-throw line, where BYU tends to have a lot of success.

But to get a second win of the year against Pepperdine, BYU needs to get more out of Alex Barcello. The Cougars’ leading scorer really hasn’t gotten the job done against Pepperdine in two meetings with the Waves, shooting a mere 16.7% from the floor and averaging just eight points per game. The Cougars play defense well enough to withstand a bad night from one player, but it’s a lot harder for BYU to be at its best when Barcello isn’t scoring. The Cougars need to get him going early to combat the likely scoring of Ross.

The long layoff. The WCC has a weird tournament format that’s designed to minimize the chance of upsets so that its best teams get the easiest road to the NCAA tournament (of course, given that Gonzaga no longer needs the protection, this move has probably backfired on the WCC more often than not, but that’s not the point), but thanks to BYU’s presence, everyone now gets Sunday off to cover the Cougars’ religious objections. As such, Pepperdine has had a full day to recover from its quarterfinal, and BYU hasn’t played at all since Feb. 27.

We’ve seen many times this season that long layoffs are often difficult to overcome for the team that’s dealing with it, and BYU’s dealing with a pair of other factors at the same time as a favorite playing in the middle of the night. Almost any coach will tell you that they don’t want to play in the last game of the day in their conference tournament when they’re a favorite, and that’s even more true when it’s their first game of the event. If you like BYU, it might be wise to wait until the first TV timeout to take them because you will likely get a better price.

Pepperdine will Cover If:

The Waves can get a star performance out of their stars. Colbey Ross didn’t shoot the ball well in either game against BYU this season, and another off-night will like-ly mean the end of Pepperdine’s chances to pull the upset. Pepperdine has to get the offense going early and build confidence in a game that’s likely to be a battle from beginning to end.

The Cougars can get to the free-throw line. Not only is BYU a good free-throw shooting team, but Pepperdine is not particularly deep. If the Cougars can get any of the Waves in foul trouble and force them to go into the bench, they’ll have a much easier time taking control of the game and holding the Waves at bay.

Pepperdine might be the team that Vegas has the best read on, as its past ten games have seen one push and six instances where the Waves came within two points of the number. Pepperdine’s also doing a great job of not getting blown out, as it’s either won or been within seven points in eight of its past nine games, with the lone exception being Gonzaga. Given that these teams played two somewhat close games this season and Pepperdine has the advantage of experience in Vegas, I’ve got to lean toward the Waves and the points in this one. Give me Pepperdine. Bet your conference tournament picks FREE by taking advantage of a 100% real cash bonus on your first deposit of $100 to $300 at MyBookie Sportsbook. When registering for a new account, you will need to make sure the bonus code/promo code box is populated with the code PREDICT100 in order to get the extra loot credited! Click here to boost your bankroll now!