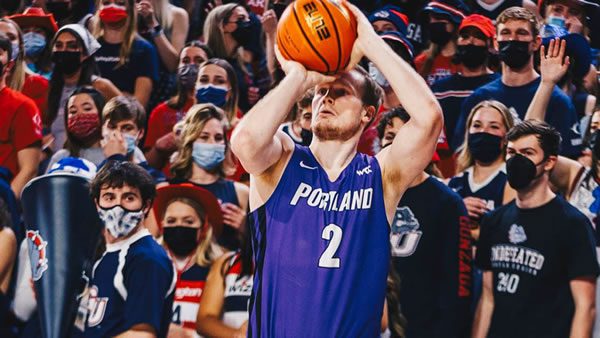 The San Diego Toreros come into this matchup with an overall record of 15-15. On the season, the Toreros have struggled in WCC action. Through 17 games, the Toreros are 6th in the conference with a record of 8-9. Not only is San Diego struggling in the WCC, but they also have a below .500 record on the road or on neutral courts, sitting at 7-9. In their past 5 contests, the team has gone just 2-3.

The Portland Pilots get set to host the Toreros with an overall record of 17-13. In the Pilots’ matchup with San Diego, they will look to move above .500 in WCC action. So far, their conference record of 7-7, placing them 5th in the standings. Portland hopes to move on in the WCC Tournament, as they are 4-1 in their last 5 contests.

Heading into the game, Portland has been reliant on the strong play of Tyler Robertson and his 15.1 points per game. So far, he has also been strong on the boards, grabbing 6 rebounds per contest. Behind him is Moses Wood at 14.1 points per game. On the season, Wood has provided his team with quality three-point shooting, hitting 45% of his looks from outside.

On the season, San Diego has just two players averaging at least 10 points per game. Marcellus Earlington leads the team at 13.4 points per contest while also grabbing 7 rebounds per game. Jase Townsend is the other player in double figures at 11 points per contest. So far, he has hit his three-point shots at a rate of 38%.

For the season, the San Diego Toreros are averaging 64.3 points per game, good for a rank of 313rd in the NCAA. So far, when playing away from home, including neutral sites, they are giving up an extra 5 points per contest. On the other side, the Portland Pilots are the 126th ranked scoring offense, averaging 72.1 points per game. The Pilots are also giving up 72 points per game to their opponents.

San Diego takes on the Pilots holding the advantage in defensive efficiency, giving up 70.0 points per 70 possessions (NCAA Average), compared to Portland at 71.0. When playing as the superior defensive unit, the Toreros have a record of 12-4. Even though Portland trails San Diego on the defensive end of the court, they enter this game holding the edge on offense. So far, the Pilots are 12-3 with an edge in offensive efficiency. In these games, they hold an average scoring margin of +6.0.

Coach Shantay Legans has his team believing they can win. They’re extremely proficient from 3-point range and have a nice mix of players that seem to be coming together chemistry-wise more each week. The Pilots have won six of their last seven games, including a 32-point trouncing of San Diego. I think they get it done Friday night at the Orleans Arena in Vegas.