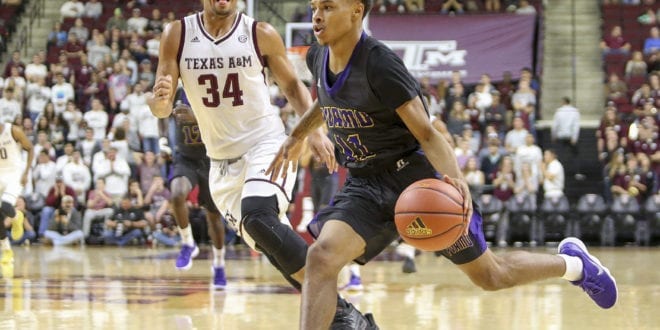 Did you know that Prairie View has just one defeat to its name in 2019? The Panthers might have started 1-11, but that was against one of the most difficult schedules in the nation. Prairie View was more than a match for the Southwestern Athletic Conference, as eight of its 17 wins came by double digits and its only loss was by five to archrival Texas Southern. The Panthers have improved by leaps and bounds under Byron Smith, as Prairie View has improved from seven wins during his interim season to 22 victories this year, his third full season. Prairie View gets most of its contributions from juniors and is a year ahead of schedule, but the one key senior for the Panthers is a big one: Gary Blackston, who leads the Panthers with 15.2 points and seven rebounds per game. Blackston is one of just a few players in purple who was actually alive the last time Prairie View made the tournament in 1998, when the Panthers lost by 58 to Kansas.

Unlike Prairie View, Fairleigh Dickinson has been here before. The Knights last made the Big Dance in 2016, but the memories are hardly pleasant, as Fairleigh Dickinson got trucked by 31 by Florida Gulf Coast in the First Four. The Knights have never won a first-round game, and in fact, no Northeast Conference team has ever won a first-round game in the tournament, making it the only league to never send a team to the second round.

This squad isn’t likely to break that streak, but that doesn’t mean that it can’t hang with Prairie View. Sportsbooks have opened them as small favorites. The Knights have won eight in a row to get to this point and had to beat Saint Francis on the road to claim their spot in Dayton. They’re led by Darnell Edge, who leads the team with 16.4 points per game and is deadly from behind the arc, shooting 46.9 percent from deep.

Tempo. This is going to be critical, because the team that can force the opponent to play at its speed is likely to win the game given how much tempo matters to Prairie View. The Panthers don’t do anything particularly well, but they do it fast. Their goal is to get as many possessions as possible and win the game through sheer volume of chances. That’s not Fairleigh Dickinson’s game, and that can’t be the way the Knights play this, because they do not have the defense to win that kind of battle. The Knights need to force Prairie View to adjust by extending their possessions and taking care of the basketball. If they can keep the Panthers from running, they’ll have the edge. If not, it’s Prairie View’s game to lose.

Prairie View will Cover if:

The Panthers can force the Knights into mistakes. Prairie View’s game is built around quick feet and quick hands, and with 8.8 steals per game, the Panthers rank 14th in the nation in thefts. The danger for Fairleigh Dickinson is that there is no oasis against Prairie View’s ball-hawking defense. All five Panthers starters can force turnovers, and if they get one, they’re quick to run with it and cash in the easy basket. With an assist to turnover ratio that’s barely over 1, the Knights can be turned over, and if the Panthers can do it, they’ll be in control.

Fairleigh Dickinson will Cover if:

The Knights can heat up from the outside and bury a few 3-pointers. Prairie View’s speed-based offense is built to score quickly, but it’s built to get points two at a time, not three. Conversely, in Edge and Williams, the Knights have two excellent 3-point shooters who can heat up at any time. Edge averaged almost 19 points per game in the Northeast Conference tournament, and the Knights will need something similar in this one.

The biggest concern I have in this game is that it turns into a free throw shooting contest. If it does, Fairleigh Dickinson is going to win, because in Edge and Jahlil Jenkins, the Knights have a weapon that many teams would kill to have: a pair of players who shoot above 85 percent from the foul line.

But that said, I think Prairie View is fast enough to keep the Knights at bay and hold enough of a cushion to get through to the daunting task of trying to take down Gonzaga in the first round. (If that happens you’ll likely be able to read my NCAA pick on that game too.) The Northeast Conference champion has gone home after the First Four in two of the past three tournaments (this is actually the seventh straight appearance for the NEC champion in Dayton), and I think Prairie View adds to the NEC misery by taking down the Knights and moving on to Salt Lake City. The fact that I’m getting a free point is just icing on the cake, and I’ll also pair it with the over, as Prairie View has scored 80 or more in five of its past six games and Fairleigh Dickinson’s defense ranks 295th in Division I.