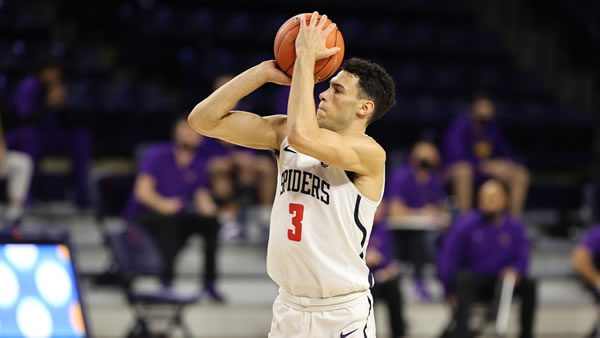 This was supposed to be a strong year for St. Bonaventure that saw them build off last year’s No. 9 seed and push toward an A-10 title and a Sweet 16 appearance. Instead, the Bonnies probably won’t be in the tournament at all unless they win the A-10 tournament, as they’re sitting at 12-6 and failed to build on a strong November. The Bonnies picked up wins over Marquette, Clemson, and Boise State, but Clemson has fallen off, and the other two just aren’t strong enough to overcome getting hammered by Dayton, Virginia Tech, and George Mason. Put simply, St. Bonaventure is going to need a lot to go its way to avoid the NIT.

Richmond is in a better position, but the Spiders aren’t exactly on the right side of the bubble either. Unlike most teams in this position, the Spiders’ big problem is that they can’t seem to figure out how to play at home. Richmond has won its past four road games, but opportunities to add names like Davidson and VCU to its resume at home have fallen by the wayside, and they own a truly awful loss at home to Saint Joseph’s. The good news is that Richmond has the schedule to play its way into the tournament if it can start to win at home, but all of those Quad 2 losses start to add up. Eventually, it becomes impossible to overcome them if you keep adding to that number. Richmond has to find a way to win at home and avoid damaging its profile further.

The Bonnies are an excellent live-bet opportunity when they have a small lead late in the game because they rarely miss free throws. Their four leading scorers all shoot 80.8 percent or better from the stripe, and they rank 16th in the nation at foul shots. The problem is that St. Bonaventure isn’t all that strong on offense when it has someone playing defense, as only Jalen Adaway has been hitting consistently from the field.

Other than Adaway, the Bonnies’ next three best scorers shoot 39% or less from the field, which means this team doesn’t put up big numbers. We saw last year just how bad things can get for St. Bonaventure when it runs into a team that plays good defense (a 76-61 loss to LSU in the NCAAs), and the Bonnies haven’t figured that out this year. The good news for St. Bonaventure is that Richmond’s defense is beatable, so if they can find space and take smart shots, they have a good chance.

If Richmond can replicate the performance it gave in Pittsburgh against Duquesne, the Spiders will be in great shape. That’s because their win over the Dukes was exactly the blueprint of how to beat the Bonnies: play good defense on the perimeter and don’t send them to the foul line. Duquesne shot just seven free throws for the game and was 4-for-21 from the arc, allowing for an easy Richmond win.

The problem is that the Spiders haven’t played defense very well in the Robins Center. Of their past four home games, only Massachusetts shot less than 50% in Richmond, and not coincidentally, that was the one home game the Spiders won. Having Tyler Burton and Grant Golden take control on offense is nice, but the Spiders must play better defense beyond stealing the ball to get wins against good opponents.

Richmond will Cover If: The Spiders can force turnovers. Richmond needs to do one of two things in order to win: force mistakes or hit shots. Against St. Bonaventure, hitting shots isn’t always easy, and the Spiders have a history of going into nosedives on offense. But Richmond usually makes up for that by forcing turnovers, averaging 8.5 steals per game. The Spiders have to keep up the thievery.

St. Bonaventure isn’t really playing good defense at the moment, but they’re still getting respect as if they were last year’s squad. As such, Richmond’s total is a rather manageable 71.5, and I think the Spiders get there.

St. Bonaventure has not been a good road team, and Richmond really doesn’t send teams to the foul line all that often. If the Bonnies don’t get to the line, they’re not going to win on the road. I’ll back the Spiders to finally figure out how to play at home. Bet your college hoops predictions FREE this weekend by taking advantage of a 100% real cash bonus on your first deposit of $100 to $500 at GTBets Sportsbook!