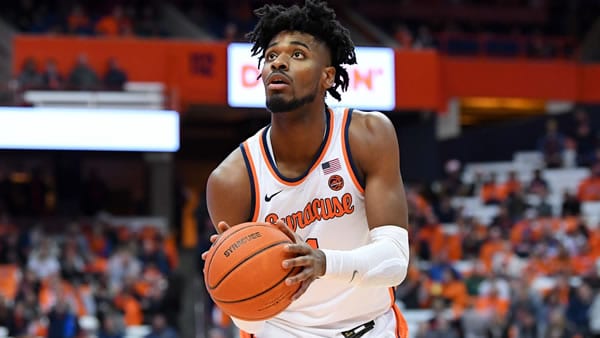 After all, we went through in the first month of the season. We’re right where we were two years ago: with Virginia standing alone atop the ACC standings. The league isn’t anywhere near what it usually is, thanks in large part to Duke’s complete pratfall, but the Cavaliers remain at the top of the table with a healthy 6-0 mark and are very much in line for a top-4 seed in the NCAA tournament.

Syracuse isn’t so much concerned as who it might play in the NCAA tournament as opposed to if it will play in the NCAA tournament. The Orange still has five weeks to pick up some wins and start to build a resume, but they might not want to wait too much longer to get started. The on-ly real opportunities to build the resume on the road in the ACC this year are at Clemson, Flori-da State, and Virginia, and the Orange won’t be playing the Seminoles on the road this year. That leaves Virginia and Clemson, who also happen to be Syracuse’s next two road foes.

In other words, if it doesn’t happen in the next two weeks, Syracuse’s NCAA chances are proba-bly kaput without winning the ACC tournament. Can the Orange handle the pressure against a Virginia squad that’s seemingly hitting its stride?

If Syracuse can play the way it did in its past two games in the Carrier Dome, it’s going to have an excellent chance at pulling off a surprise. The Orange were outstanding with both their shot selection and their decision making against Miami and Virginia Tech, committing just eight turnovers per game and hitting above 50 percent of their shots. The defense also came up big, holding both the Hurricanes and the Hokies to under 40 percent from the floor.

So why are the Orange a 6.5 point underdog in this game? It’s because they haven’t shown that they can get the job done when they get away from central New York. Quincy Guerrier has been a top contributor no matter where he plays, but the rest of the team has been incon-sistent, especially on the defensive side of the ball. Against Pittsburgh, the Orange gave up 64 points in the second half — a far cry from the 57 and 60 points that they gave up in the entire game against Miami and Virginia Tech. How the Orange fare depends greatly on the perfor-mance of the defense.

When Virginia is at its best, things can get really scary for the Cavaliers’ opponents. When the defense isn’t getting the job done properly, things get really scary for Virginia coach Tony Ben-nett. Both ends of the spectrum were on display in the Cavaliers’ past two games, as Virginia shut Clemson down almost completely but couldn’t stop Georgia Tech from hitting from the outside.

Against the Tigers, Virginia’s defense was dynamite, as Clemson only shot 21.7 percent from behind the arc in a 35-point rout for the Cavaliers. On the other side of the coin, Georgia Tech shot 60 percent from deep and nearly pulled off a stunner in Charlottesville. What saved the Cavaliers was their shooting, specifically that of Sam Hauser. Hauser was 9-for-12 against the Yellow Jackets and has been the main man for this Cavalier squad, in large part because he takes smart shots out of the offense.

Where Virginia needs improvement is in the person of Kihei Clark. Clark is normally a reliable offensive option for the Cavaliers, but against the Yellow Jackets, he shot 1-for-10. That’s not going to win many games, and if the rest of the Cavaliers didn’t have his back, Virginia would have gotten beat.

Life on the road. Syracuse is notorious for being a home-court hero that ends up build-ing a resume that’s full of wins at home but lacking elsewhere on the profile. In a year like this, where nonconference schedules didn’t really allow a team to build up a large win total, road wins are going to be more important than ever, and Syracuse simply doesn’t have them to this point.

So far, the Orange haven’t proven that they can get anything done on the road, as they’re just 1-3 outside of the Carrier Dome this year, and the one was over a reasonably weak Boston Col-lege squad. Losses to Pittsburgh and North Carolina aren’t exactly going to qualify as quality losses, which means Syracuse has to get the job done either in this game or at Clemson (and possibly both) to have any realistic hope of making the tournament.

Virginia doesn’t have that pressure, as the Cavaliers are likely to make the tournament as long as they stay the course the rest of the way. In a game like this, though, that means Virginia’s got to match Syracuse’s desperation because the Orange have to have this game.

The Orange can turn the tables on Virginia and throw a wave of tough defense at the Cavaliers. Syracuse has been a strong defensive squad at home, but once they get outside the comforts of the Carrier Dome, the Orange have proven unable to stop anyone. Syracuse is giving up just over 80 points a game on the road, and that’s helped by holding Boston College to 63 points. Giving up 80 points to Virginia is a certain way to lose the game, because the Cavaliers aren’t giving that up to anyone but Gonzaga.

Kihei Clark can get back to being himself. The guard has been an important part of Virginia’s offense, and the Cavaliers just can’t function the way they need to when he isn’t hitting his shots. If he’s back on track, Virginia should be in good shape.

Virginia has looked outstanding for most of January, with the Georgia Tech game being a rare exception to that. The Cavaliers have covered three of their past four games in January, with all three of those covers coming by double digits. Virginia has the stronger team, and Syracuse just hasn’t gotten the job done when they’ve left their home building.

People can debate the merits of home-court advantage during this unique season, but home court still seems to be affecting Syracuse, with or without fans. Throw in that Georgia Tech was likely a wake-up call for the Cavaliers, and I think there’s a good chance Virginia scores a com-fortable win. I’ll take the Cavaliers. Question: Did you know that you could be betting on games at -105 odds instead of -110? Imagine how much money you would save if you saved 5 bucks per 100 that you’re trying to win. It adds up HUGE over time! We highly recommend making the switch to BetAnySports! You’ll be so glad you did!