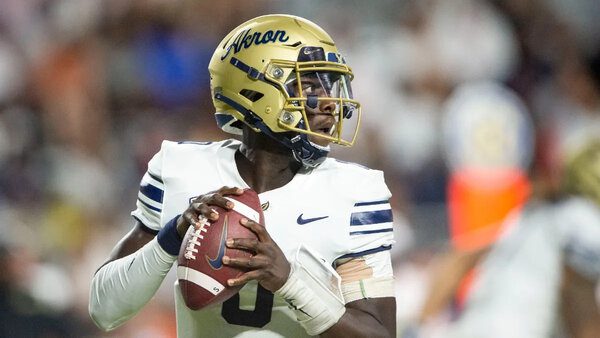 The Zips have an overall record of 2-9 coming into this week’s game. They are currently 1-6 in Mid-American action. This season, the Zips have been favored in 1 game while posting an ATS mark of 5-4-1. Their average over-under betting line is 50.86 leading to an over-under record of 4-6-0.

The Zips are going for another win, as in their last game, they defeated Northern Illinois, despite entering as the betting underdog. In the game, Akron finished with three touchdowns through the air while throwing for 312 yards. On the ground, the team ended with one rushing touchdown while averaging 5.4 yards per carry for a total of 200 yards.

So far, quarterback DJ Irons has a passer rating of 87.45 while completing 253 of his 379 attempts. Currently, he has a total of 2605 passing yards. So far, the team’s most productive wide receiver is Alex Adams, who has caught 56 passes for a total of 837 yards. The Zips have turned to running back Cam Wiley a total of 106 times for a total of 486 rushing yards.

In their previous game, the Bulls fell to Kent State on the road by a score of 30-27. Buffalo also picked up an ATS loss, as they were 4.5-point favorites entering the game. To finish the game, the Bulls had a yards per completion figure of 8.2 and a total of 165 yards through the air. However, they did not come up with a touchdown pass through the air. The team ended the game with three rushing touchdowns, along with a total of 181 yards on the ground.

The team’s leading quarterback is Cole Snyder, who comes into the game with a passer rating of 84.11 on a completion percentage of 59.9%. So far, the team’s most productive wide receiver is Justin Marshall, who has caught 47 passes for a total of 627 yards. The top option in the run game for the team is Ron Cook Jr., who has carried the ball 139 times for a total of 600 yards.

Looking back on their last ten games, the Zips have an ATS record of just 5-4-1. In addition, their straight-up record is only 1-9-0. The team averaged 20.9 points in these games while allowing 35.6. Their last ten over-under record is 5-5-0.

Across the Zips’ last five road games, the team averaged 24.6 points per game while allowing 36.8. Their record vs. the spread in these contests was 3-2-0 while going 1-4-0 straight-up.

Through their last 10 matchups, Buffalo has gone 5-5-0 straight up and 6-4-0 vs the spread. They maintained a positive scoring differential in these games by averaging 31.5 per game and allowing 27.3. Their last ten over-under record is 7-3-0.

Through their last five home contests, the Bulls’ offense has averaged 28.6 points per game while allowing an average of 29.4. Buffalo posted an overall record of 2-3-0 while going 2-3-0 ATS.

Heading into this week’s matchup, the Zips will look to improve their offensive output, as they are ranked just 108th in the NCAA in points scored. In this matchup, they are facing a Buffalo defense allowing an average of 27.6 points per game.

So far, the Akron offense is averaging just 93.0 yards per game on the ground. This production has come on an average of 31.64 rush attempts per game (113th). This week, the Zips will be facing a Buffalo defense ranked 141st in rush yards allowed per game. This year, they have averaged 98.89 yards per game when facing defenses ranked outside the top 50.

Heading into this week’s matchup, the Bulls will look to improve their offensive output, as they are ranked just 59th in the NCAA in points scored. However, they have an excellent matchup against an Akron defense, allowing 34.5 points per game.

Although the Bulls have turned to the passing attack at a below-average rate this season, they have an opportunity to find success through the air vs. an Akron defense allowing teams to complete passes at a rate of 55.57%.

This year, Buffalo is ranked 17th in attempts per game, averaging just 154.18 rush yards per contest. This output places them 66th in the NCAA. This week, the Bulls will be facing an Akron defense that is ranked 124th in rush yards allowed per game. So far, they are averaging 154.18 yards per game when facing defenses ranked outside the top 50.

The Buffalo Bulls have dropped three straight and really don’t have much to play for when they take on the Akron Zips. The Zips are only 1-6 in conference play but lost only two of the games by more than one score resulting in a bankroll padding 5-2 versus the spread in those games.

Take Akron +12. Bet your Week 14 NCAA football picks for FREE by scoring a 100% real cash bonus up to $300 when you use bonus code PREDICT100 at MyBookie Sportsbook!