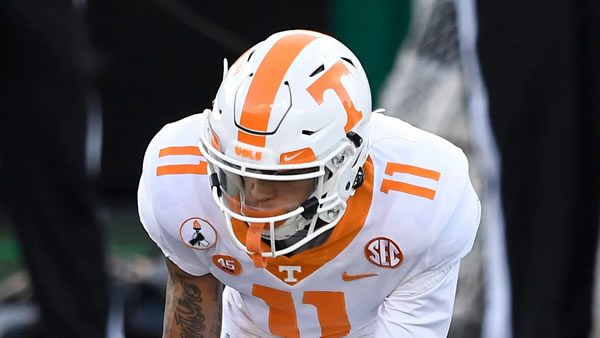 Is Tennessee finally ready to play with the likes of Alabama? The Volunteers have basically done nothing but gotten destroyed by the Crimson Tide ever since Nick Saban arrived in Tuscaloosa (he’s 15-0 against Tennessee ever since he became the coach of Alabama in 2007), as the Vols’ dark period basically coincided with the rise of Saban’s Alabama. What’s followed is a few close losses, but mostly one blowout after another as Alabama has taken full control of a series that used to be fairly even.

But this Tennessee team has actually looked like it belongs in Atlanta along with Georgia and Alabama, something that the Volunteers haven’t accomplished since 2007. It’s been a while since Tennessee football could actually legitimately think of besting Alabama, but that’s what the Vols have created this season as they host this matchup.

And it couldn’t come at a better time because Alabama actually looks vulnerable for a change. The Tide are clearly not the same team without Bryce Young, and although they aren’t Oklahoma bad, they’re also not themselves. They barely survived against a middling Texas A&M team last week and had to struggle with Arkansas before pulling away in the fourth quarter. Of course, when Alabama looks vulnerable is when Nick Saban is at his best, so it’s hard to pick against him even when everything seems to be going against him. Which way does this one turn?

How the Public is Betting the Alabama/Tennessee Game

The public and the sharps both believe in Tennessee for this situation. Roughly 65% of all tickets have come in on the Volunteers, and they’ve gotten the line to tick down from -7.5 to -7. The total has ticked up from 64.5 to 65.5.

Before you make this bet, look closely at Alabama’s quarterback situation and not just at what Saban says before the game. Just because Saban says someone will play or not play doesn’t mean a thing until you actually see them on the sidelines in uniform or in street clothes, as Saban comes from the Bill Belichick school of coaching and hates giving anything away until he has to do it.

If Young is on the field, this should probably be a higher line. Young is clearly one of the top quarterbacks in the country, and Tennessee is simply not a good pass defense. The Vols rank 128th against the pass, and Alabama has the personnel needed at quarterback to exploit that mismatch all day long. But does Alabama actually have the wide receivers to take advantage of this situation? Traeshon Holden and Ja’Corey Brooks are good, but they’re not Devonta Smith or Jaylen Waddle. Alabama’s receivers really don’t stand out this season, which is one reason why the Tide have openly embraced running the football with Jahmyr Gibbs. However, Gibbs might find tough sledding against Tennessee’s run defense, which ranks 11th in the nation. The easiest way for Alabama to win this game is to throw.

What sets this Tennessee team apart from past squads in Knoxville is that Hendon Hooker can make his throws and actually does precisely that. The Volunteers lead the nation in yards per game and rank second in points per game, and Hooker is a big reason why. He’s thrown for 1,432 yards and ten touchdowns to this point, and more importantly, he has not turned the ball over this year.

Even being without Tillman hasn’t slowed down Tennessee a bit this season, as the Vols looked invincible at LSU. Alabama has mostly played well against the pass this season, but Haynes King showed that it was possible to move the ball on the Tide in Texas A&M’s near upset of the Tide. Hooker must find Jalin Hyatt early and often and mix in what has been a solid ground game to throw Alabama off of its game. The Tide does rank sixth in total defense, but the past two weeks have shown they are not invincible. Tennessee must show that it believes it belongs on the same field as Alabama.

Knoxville has proven a home away from home for Alabama under Saban, as the Tide have covered in nine of their past ten trips to east Tennessee. The over has also proven a strong play, usually, because Alabama has pounded Tennessee and put up so many points in the process that any scoring from the Vols has been enough to push it over. That’s happened in seven of the past ten meetings, including five of six at Neyland Stadium.

While Alabama has been betting gold as usual at this point of the season, Tennessee is still in prove-it territory. The Vols have only gone 5-12 ATS in their past 17 against a team with a winning record and have two covers in seven SEC games. Alabama has been much better in October, covering in seven of its past nine October games.

Weather isn’t getting in the way of a good battle in this situation. Temperatures will come in at a comfortable 75 degrees, with winds blowing south-southeast at seven miles per hour.

Don’t make this play until you have firm information about Bryce Young. It seems like Tennessee has improved to the point where the Vols are ready to hang with Alabama, but the Vols’ lack of experience in these type of games does give me some hesitation. If Young plays, I’ll have to go with Alabama to land the cover. If not, I’ll take Tennessee and the points.Bet your Week 7 college football picks for FREE by scoring a 100% real cash bonus up to $500 by using bonus code PREDICTEM at Betnow Sportsbook!