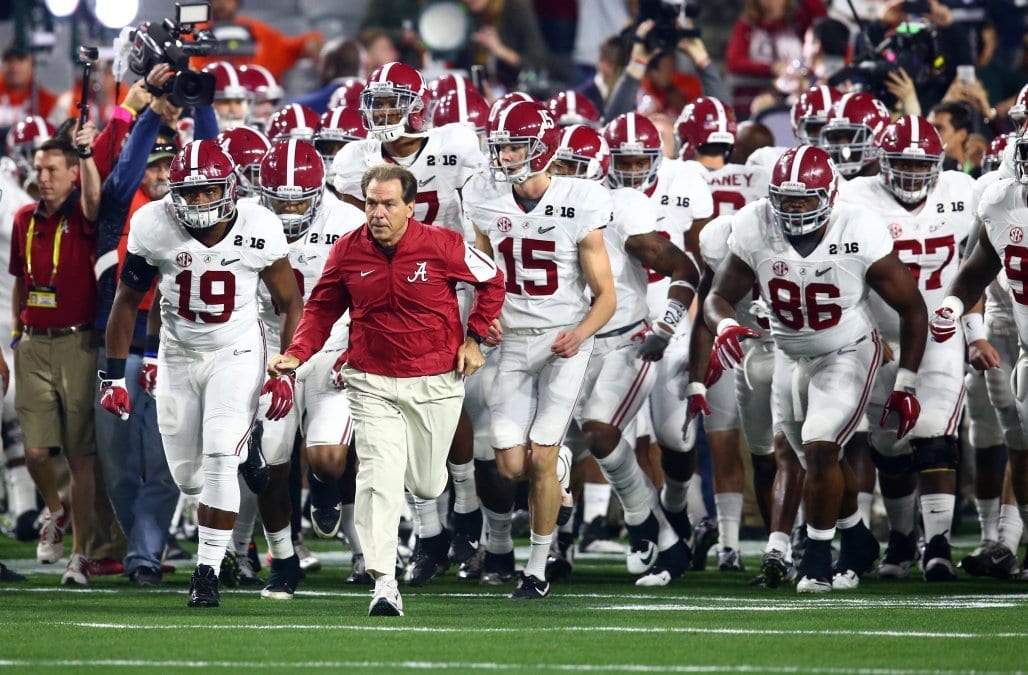 Last week, I missed the boat on Alabama. I thought Arkansas State would get some scores, Alabama would pull their starters, and I thought the 37 point spread was a bit too lofty. Instead, the Crimson Tide jumped out to a 40-0 led by halftime and cruised to a 57-7 victory to go 2-0 SU and ATS. Perhaps I underestimated the Crimson Tide defense and furthermore I am now convinced that Alabama is completely unstoppable with QB Tua Tagovailoa under center. While it looks like Alabama is setting up for another title run, an unsettling foe awaits this Saturday in Oxford. The Ole Miss Rebels who have been a thorn in the side of Alabama over the last few years.

Before last year’s blowout win in Tuscaloosa 66-3, the Rebels had Alabama’s number. They upset the Crimson Tide in 2014 and 2015. They also took the Crimson Tide to the brink in 2016 but fell short in a 48-43 shootout. Normally when you think about the powerhouses in the SEC West that pose the biggest threats to the Crimson Tide, most would think of Auburn and then LSU. However, Ole Miss holds the most victories over Alabama in the last 4 years and this Alabama-Ole Miss rivalry has blossomed into a highly anticipated event. Still with Alabama’s impressive blowouts in the first two games, the Rebels will have a huge challenge if they are going to continue to be one of Crimson Tide’s biggest challenges as they enter this Saturday’s contest as 21 point underdogs.

Should we expect another Alabama vs. Ole Miss shootout?

In the last 3 years, these games have historically been all about the offenses. The total has reached 80 points or higher twice. Then last year Alabama just ran away in a 66-3 blowout. While some may see last year’s results and become wary, the Rebels offense appears to be back in full force. Ole Miss quarterback Jordan Ta’amu has been flawless with 7 touchdowns and 0 picks averaging nearly 400 passing yards through the first two games. Meanwhile, the running game has been very effective with running back Scottie Phillips who is averaging 10 yards per carry on 31 attempts with another 4 touchdowns. Needless to say, the Ole Miss offense has been firing on all cylinders with impressive outings in each of the first two games resulting in a 47-27 win over Texas Tech and then a 76-41 shootout last week over Southern Illinois.

If you consider how impressive Ole Miss has been offensively, Alabama has been even more impressive in their opening two outings. As mentioned earlier, QB Tua Tagovailoa is providing a huge boost to the Alabama offense in the passing game. Typically Alabama’s offenses under Head Coach Nick Saban have been supported by a relentless power rushing attack. This year Alabama still has the big offensive line and the strong running game behind Damien Harris. However, Tagovailoa is making defenses pay with the play action and RPOs down the field. Coach Saban has opened the playbook allowing wide receivers DeVonta Smith and Jerry Jeudy big play opportunities in the passing game. So far, everyone has delivered which means the 71 point total could be in jeopardy with these two explosive offenses on the field this Saturday.

Obviously the offenses for both teams are clicking right now but the reason this game will go over the mark is because of the Rebels weakness on defense. Ole Miss’s defense has posted two poor performances this year. They gave up 486 total yards in the win against Texas Tech and then gave up 46 points last week against Southern Illinois. I mentioned earlier how strong Alabama has been on the offensive side of the football this year and that is not going to change especially with rumors that Jalen Hurts may no longer get any reps. I feel like the Crimson Tide offense is going to continue to flex their muscles in this game. I expect Alabama to post another big number and Ole Miss will be playing their typical fast pace game in effort to claw for points. The offenses and game pace will push the scoring easily over the total.

Jay’s Pick to Cover the Point Spread: Take the over 71