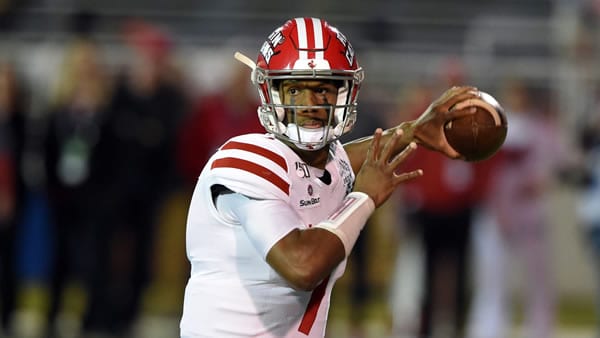 Welcome to Tuesday night action from the Sun Belt, as Appalachian State and Louisiana face off in what has the potential to be a preview of the Sun Belt title game. The Ragin’ Cajuns aren’t quite as talented as they were a year ago, but they remain the class of a fairly weak West Division and will almost certainly be the team representing the West against either App State or Coastal Carolina.

Appalachian State has a much tougher task ahead of it, as this game is the start of a two-game stretch in which the Mountaineers will face Louisiana and Coastal Carolina. Coastal won’t play Louisiana, so a slip here would take away any margin that Appalachian State has for error. Historically, this has been a matchup that has favored App State, but Louisiana finally broke through against the Mountaineers last season, winning for the first time in nine meetings. However, that game was a result of App State shooting itself in the foot with a minus-3 in turnovers, not because of a great performance from the Cajuns. Can Louisiana go out and win this matchup this time, rather than relying on the Mountaineers to make mistakes?

How the Public is Betting the Appalachian State/Louisiana Game

The public and the pros are on opposite sides in this one, as the public is backing the Mountaineers hard but the sharps are on Louisiana. Even though 75 percent of tickets came in on App State, the line has dropped from -3.5 to -3 as money came in on the Cajuns. The number has also ticked up from 54.5 to 55.

Running back Nate Noel (toe) is questionable. Running back Daetrich Harrington (undisclosed) is out.

Chase Brice seems to be getting more comfortable in the App State offense, as he threw for 326 yards and three scores against an overmatched Georgia State the last time the Mountaineers took the field. App State started a bit slowly in that game, scoring just 14 points in the first half, but the Mountaineers were never really in danger of losing because the pass attack had no problems connecting throughout the contest.

However, the ground game might need to be a little better this time out, because Louisiana’s weakness is the run. The Cajuns were gashed against Georgia Southern’s powerful triple option game for 278 rushing yards and only barely escaped with a 28-20 win. However, Nate Noel is dealing with an injured toe and might not be able to handle much of a load, which means the job could fall to Anderson Castle. Castle was only pedestrian against Georgia State, and he’s going to have to be better if the Mountaineers are going to take advantage of Louisiana’s front seven.

The Cajuns are doing just enough to survive, but only just, as they barely escaped in Mobile against South Alabama the last time they took the field. The passing game was virtually nonexistent against the Jaguars, and even though South Alabama has defended the pass fairly well, that’s not a great sign going into a game with Appalachian State.

The Cajuns’ pass attack should be solid under Levi Lewis, but he’s coming off one of his worst games at the position, as he was just 9-for-20 for 49 yards in the win over the Jaguars. The Cajuns survived because Emani Bailey and Montrell Johnson never slowed down against the Jaguars’ front seven, piling up 225 yards on the ground. That isn’t likely to happen against Appalachian State, though, as the Mountaineers have shown they know how to stop the Cajuns’ offense.

More Picks: Get Jay’s Kentucky at Georgia Pick Against the Spread

Backing the under has traditionally been the way to play this game. These teams are known for putting up a lot of points, but when they face each other, the defenses tend to rule the day. In their past five meetings, only one of them has seen more than 50 points scored, that being a 45-38 App State win in the 2019 Sun Belt title game.

Backing the Mountaineers on the road, however, has not been an effective strategy in recent times. Despite playing in closed door stadiums last year, App State was 0-3-1 ATS away from home a season ago in Sun Belt games. The Mountaineers have rectified that this season, covering at both Miami and Georgia State, and they’ve tended to play pretty well at Cajun Field, covering in two of their past three trips to Louisiana. That’s bad news for Cajun bettors, as Louisiana has failed to cover in its past three Sun Belt home openers and is just 3-8-1 at home in the conference since Billy Napier took the job.

There are two reasons the Sun Belt plays a lot of midweek night games. The first is to get on national television. The second is to get out of disgusting weather, and they’ll avoid a humid day by playing this at night. It’s still going to be sticky, but it’s going to be a more manageable 71 degrees with a slight four mile per hour breeze, as opposed to the 88 degree high early in the day.

App State gave away the game a season ago. The Mountaineers should be able to avoid the costly mistakes this time around, especially knowing that they’ve got to get a win here to avoid giving away their margin of error against Coastal in the SBC East.

This line is dropping, and I think I’ll wait until kickoff to grab the Mountaineers and see if I can get them under the critical number of 3. When a football game has a 3-point spread and you’re itching to bet but aren’t completely clear on which way to go, the answer is almost always to live bet the game. Check out how the line-play is going… Is the offensive line on one team getting pushed around? Is th OL holding up well and the QB has all kinds of time to throw? Is the line opening up big holes to run though. With that being said, lots of sportsbooks offer live wagering, however, there’s one that stands out above the rest —> Bovada Sportsbook. They seemingly always have an active line to bet, while others play chicken and have games “off” most of the time and only bettable during commercial breaks. You also get a 50% bonus at Bovada and rebates on ALL your bets; win, lose or draw! Click here to start betting with the best TODAY!