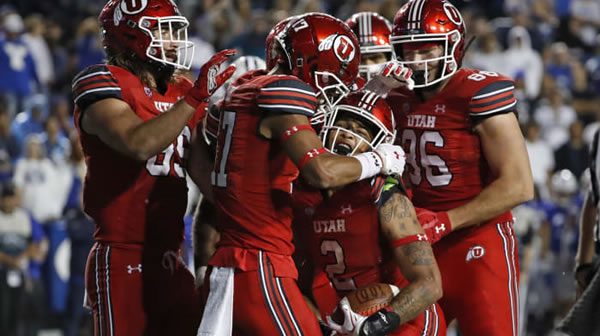 Point Spread: ASU -1.5/UTAH +1.5 (BAS - Did you know that you can bet on games at -105 instead of -110? Imagine how much money that would save you! Your investment? 5 measly minutes to sign up for a betting account and make a deposit!)

The Arizona State Sun Devils take on the Utah Utes in Salt Lake City this Saturday in Pac-12 action. It’s a big game for both schools, each of whom has gotten their conference schedules off to fast starts. On Saturday, Arizona overcame a dangerous test, beating Stanford, 28-10, for their third straight conference win to open their Pac-12 schedule. Utah, meanwhile, won their second straight conference game on Saturday with a big 42-26 win over USC. As far as the early standings go, this is a high-stakes matchup between two teams who could be players in the Pac-12.

A 5-1 start to the season is promising for a team that has finally gotten some foothold under Herm Edwards. Their only loss is to a BYU team that also beat Utah. But they’ve really shown their growth since getting into conference play with three straight wins. Their offense is crisp, while their defense has given up a combined 46 points in their last three games. They’ve been keeping dangerous offenses in check while unleashing dangerous QB Jayden Daniels, an emerging dual-threat player who is hitting his stride in this offense. RB Rachaad White is one of the best in the Pac-12 while being a dangerous pass-catcher. With TE Curtis Hodges and receivers Ricky Pearsall and LV Bunkley-Shelton, they are amply stocked offensively.

This is a tough place to play and a real test for the Sun Devils. A win here suggests they are for real. With a stronger defense, it gives their case real teeth. Utah was able to pour it on against USC last week, but typically, they’re more of a team that will grind out wins and rely on their defense balance. Against the multi-pronged Arizona State offense, that might not come off as well as it has in recent weeks. And with Arizona State’s newfound defensive respectability, the sometimes-methodical Utes’ offense could find it to be an uphill battle.

Issues for Utah This Week

QB Cameron Rising is coming off a good week against USC for the Utes. He atoned for a shaky performance the previous week, but such is the case with a young player behind center seeing some things for the first time. There are going to be ups and downs. He couldn’t lead his team to a win over San Diego State in his first start, but his defense carried him against Washington State before shining against USC, something that isn’t that hard to do nowadays. Against what has been a solid defense against both the run and the pass, this is a spot where quite the effort will be needed by the young Rising.

With backs Micah Bernard and Tavion Thomas, along with a deep cast of different contributors on offense, Utah has a lot of developing talent. In comparison to Arizona State, however, they are still a force that is a work-in-progress. They’re still forming an identity under a young QB who has shown a lively arm and a nifty set of legs but is still getting his feet wet. With the Sun Devils, you have a lot of key guys, including Daniels, who has already cycled through the conference rotation several times. With it comes a certain level of reliability.

Usually, in a matchup between these two teams, a steadfast Utah offense would be able to rely on a certain level of fallibility from the ASU defense to eventually get over the hump. But the roles have changed. Or at least it has through the first handful of games. That’s the thing. In the Pac-12, prior form only counts for so much. Things can, and often do, flip on their head for whatever reason in this conference, and it happens multiple times a week. At any rate, Utah’s offense appears to have a stern challenge this week.

We’re getting into the part of the season where being in Salt Lake City starts to pay off when you catch warm-weather teams getting their first dash of cold. And with this being a night game, that’s something to consider. It’s jarring to go from the weather ASU has thrived into one of the coldest spots you can have in conference. Also, when a younger Jayden Daniels last saw this stadium, he was putrid at 4-for-18 passing with 25 yards. Obviously, a lot has changed, but it’s more food for thought. And no matter how the matchups might shake out, Utah is typically a very competent football force at home, a steadfast football force that can pounce on mistakes and take teams out of their wheelhouse.

No one can count on Arizona St. delivering in this spot. It’s an out-of-the-way game with some different elements against a solid team that is unbeaten in the Pac-12. I just think the ASU machine keeps moving in this spot. Utah has a lot of weapons to contain, and in order to keep pace, they’re going to need a special performance on offense. That also goes for their defense, and while it would be unwise to rule out a vintage Utah performance, I see more scenarios shaking out where it’s Arizona State getting what they want done. I’m taking the Sun Devils.

College kid bonus! Deposit $25 and get an additional $50 FREE! Simply sign up for an account at Intertops through this special link, deposit $25, then go to their special offers page and add bonus code ROOKIE200 and an extra $50 will show up in your balance instantly!