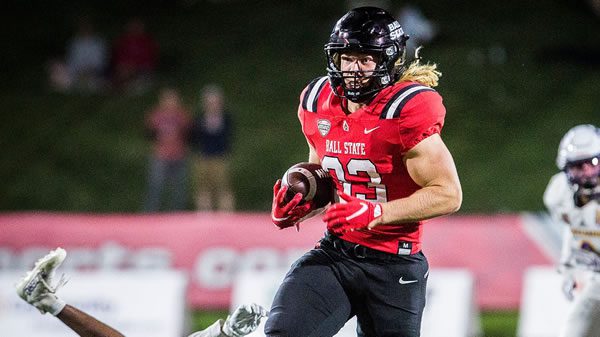 The MAC West goes through DeKalb, as Northern Illinois has already established tiebreakers over most of its competition in the league and pretty much only needs a win over Ball State in order to lock down the division. If the Huskies do beat the Cardinals, they’d hold a two-game lead over everyone with the tiebreaker, which means a win here coupled with either one more victory or one Western Michigan defeat would be enough to lock down a trip to Detroit.

But Ball State is in prime position to bump the Huskies off and steal the trip to Detroit for themselves. The Cardinals were last year’s Western Division champions, and they’re now just a win away from setting themselves up to repeat as MAC West champs. If Ball State can get a win here, the Cardinals would be tied with the Huskies and in control of their own fate, as they’d own the tiebreaker and would just need to win the final two games of the season — both at home — to take the West title for the second straight year. There’s also the other significant benefit to a win here: a win would lock up a bowl game for Ball State.

How the Public is Betting the Ball State/Northern Illinois Game

The public is siding with the home team, backing NIU by almost two to one. This hasn’t been enough to change either the total or the spread.

A year ago, Ball State boasted the most feared rushing attack in the MAC behind Caleb Huntley, an experienced runner who took a lot of the pressure off Drew Plitt. Carson Steele isn’t quite there yet, as he’s just a year removed from winning a high school state championship in Indiana before heading up I-69 to lead the Ball State ground game.

Steele is showing that he’s going to be a tough back to stop in future seasons, but for now, Ball State is more of a passing team, as Plitt has been a proven leader during his time in the Cardinals’ offense and has made the passing attack one of the more difficult offenses to deal with in the MAC. Plitt tossed for four touchdowns in a win over Western Michigan this year, and going up against a defense that has given up 90 points in its past two games looks like an open invitation for the Ball State signal-caller.

The big question here is whether quarterback Rocky Lombardi is really healthy. Lombardi took a hard shot to the head on the Huskies’ final scoring drive of the night, and NIU didn’t see the ball again, which left it up in the air as to how serious the injury was. Lombardi didn’t attend the postgame press conference, suggesting a fairly serious injury that might not be something he can recover from in just a week.

If Lombardi can’t go, the Huskies might have to just serve up a strong dose of running back Jay Ducker and hope for the best. That strategy can work, as NIU only threw eight passes in a win over Bowling Green, but the Cardinals will probably try to stack the box if the Huskies don’t have Lombardi on the field. None of the other three quarterbacks on the Huskies’ roster has ever thrown a pass in a collegiate game, as all three are freshmen. Regardless of who starts, the Huskie passer will be trying to get the ball to Trayvon Rudolph as often as possible, as Rudolph came up with an incredible performance without Tyrice Richie on the field. Rudolph hauled in 14 passes for 309 yards against Kent State. The most anyone has in a game all season.

This has not been a kind series for Ball State. The Cardinals have failed to cover in eight of their past nine meetings with Northern Illinois, and they’re 0-4 ATS in their past four Wednesday night MACtion games. However, one thing Ball State has always done is play up to the level of its competition, as it has covered in 14 of its last 17 against a team with a winning record. The Huskies also haven’t been much of a home underdog, having failed to cover in each of their past four games as a home dog. MACtion usually means overs, but Ball State has been the exception, playing under in five of its past seven league games. Northern Illinois is far more typical; its past two games have gone over, and it’s 5-2 to the over in its past seven.

It’s going to be cloudy and cool in DeKalb for this battle, with temperatures dropping into the low 50s or high 40s. Wind could play a role in this one, as winds are set to blow at 13 miles per hour. If the game is a long one, rain could also arrive at the end.

This situation really seems to favor Ball State. We have no idea if Lombardi will play, and the fact that he didn’t speak after a game in which he threw for almost 500 passing yards suggests that he might have had to go through concussion protocols. If that’s the case, there’s a better than average chance he won’t play, and if he doesn’t, Northern Illinois’ hopes could go up in smoke. I’m not putting my trust in that uncertainty. Give me the Cardinals.