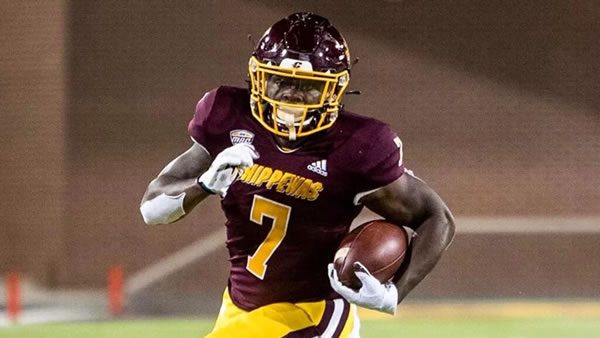 There’s a fair amount of hype around Oklahoma State coming into the season, but we’ve been here before with the Cowboys at the start of the year. The Cowboys are a huge favorite in their home opener, but they’ve failed to cover in their past two home openers, as both Tulsa and Missouri State pushed them as underdogs of 20+ points. The two years before that, Oklahoma State just barely covered, getting the job done by 0.5 points.
But the last time Central Michigan was in Stillwater, the Cowboys didn’t get the job done against the Chippewas. Not only did CMU cover, but the Chippewas won the game outright by hitting a touchdown pass on the final play. And the Chippewas have the ability to hang around, given the talent they’re bringing back from last season. Central Michigan averaged 32.3 points per game last season and still has several skill players back in Mount Pleasant, which could be a tough test for Oklahoma State’s young defense. The Cowboys should be able to earn a win this time around, but this cover might be a tough ask against a Central Michigan team that’s better than people think.

How the Public is Betting the Central Michigan/Oklahoma State Game

The key for the Chippewas is simple: who is going to replace the pass-catching of Kalil Pimpleton and JaCorey Sullivan? Pimpleton was CMU’s best receiver last season with 62 catches and 960 yards, while Sullivan led the Chippewas with ten touchdown catches. That’s tough to make up the production, but CMU does have three big weapons back in quarterback Daniel Richardson, running back Lew Nichols, and wide receiver Dallas Dixon.
That should make a big difference for CMU’s attack, especially on the ground. Nichols often took over games last year with 1,895 rushing yards and 16 touchdowns, while Richardson is a very accurate passer, tossing 24 touchdowns against six interceptions last season. With Oklahoma State debuting six new players in the linebackers and secondary, the Chippewas have a few ways that they can play this. They can opt to attack the Cowboys with the pass from the beginning and hope Richardson can pick his spots well, or they can try to have Nichols establish the run early and break into the Oklahoma State linebackers. With Central Michigan returning both guards and its center on the offensive line, Nichols might be the early choice.

The Cowboys couldn’t really get much going in the early part of last season on offense, which happened in large part because of just five starters back on offense. Once Spencer Sanders got rolling, the Cowboys’ offense showed a fair amount of improvement, but only Kansas, TCU, and Oklahoma allowed more than 32 points to Oklahoma State in the regular season last year.
The passing game should be better this time around, but there’s reason to worry here: Sanders is the top returning runner for the Cowboys, and there’s nobody who really got much experience last season coming back in the backfield. Dominic Richardson was the best one behind Jaylen Warren last season, but he only got 79 touches last season. The Cowboys do have four starters back on the offensive line, which could make a big difference in getting the ground game going against a Central Michigan defense that is also debuting an entirely new linebacking group.

In two meetings, Central Michigan has covered both times, although those games took place in 2015 and 2016, so the only one who was around for those games was Oklahoma State coach Mike Gundy. If the Cowboys are going to get their first cover against the Chippewas, they’re going to have to step it up on offense compared to the last two seasons, as they only managed 23 points in last season’s opener and 16 the year before.
Central Michigan became a solid defense near the end of last season in holding its last three opponents to 21 points or less, but before that, the Chippewas won with offense and not the defense. In eight of their first nine games a season ago, Central Michigan gave up at least 23 points to every opponent it faced. Over the past four seasons that included non-conference games (excepting 2020), Central Michigan had at least one cover against a Power 5 opponent, going 5-5 ATS and beating Kansas outright in 2017.

Humidity could be a factor here, but otherwise, cooling temperatures will make for a rather pleasant experience in Stillwater. Temperatures will sit in the mid to high 60s at kickoff, with winds blowing at just four miles per hour to the east-southeast.

Oklahoma State has too many new faces to expect a blowout here. Lew Nichols is a genuinely talented back, and Central Michigan isn’t going to be afraid to use him to keep the clock moving and keep the Cowboys’ offense on the sidelines. The longer the Chippewas stay on the field and keep the score manageable, the easier it will be for them to put up points.
I think Oklahoma State will emerge victorious, but it’s going to be by one or two scores, not the huge line the books are proposing. I think the Chippewas keep this within three touchdowns, so I’m grabbing them with the 21.5 points. Did you know that you can tease this line up to +41.5 by using a massive 20-point teaser only offered at Wagerweb Sportsbook?