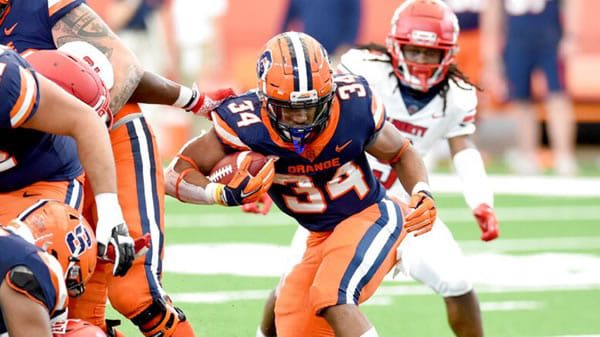 While Alabama made a push for the #1 ranking in the country with their impressive win over Georgia last week, Clemson did not let anyone forget who is the top-ranked team in the country. The Tigers completely destroyed Georgia Tech in one of the most lopsided games of the season, resulting in a 73-7 thrashing on the road against the Yellow Jackets. QB Trevor Lawrence, the consensus #1 pick for the 2021 NFL Draft, racked up five passing touchdowns in the first half before being pulled with the game out of hand. Lawrence’s Heisman Trophy campaign appears to be in full swing, and the consistent high scoring totals from the Tigers offense has pegged Clemson as an enormous 46 point favorite this week when they host Syracuse at Memorial Stadium.

Clemson’s dominance in the ACC is nothing new but the gap over other ACC competitors appears to be widening on a weekly basis. This week Syracuse is listed as 46 point favorites, which is the largest underdog betting line the Orange have faced in school history. The Orange have been huge underdogs at times throughout history. In 2013, Syracuse was 37 point underdogs against Florida State who went on to win 59-3, and later that year, the Seminoles won the National Championship. Before this week, the largest point spread with Syracuse in the underdog role was a 38 point margin against no.1 Nebraska back in 1983. The Cornhuskers, like Florida State, also covered that betting line with ease in a 63-7 victory.

Despite a few big underdog moments described above, this week’s game against Clemson marks the widest point spread in school history by a relatively large margin. The question is, will history repeat itself. In the two examples above, the Orange were not only massive underdogs, but they also lost by nearly 20 points against the number in each scenario. Syracuse is just 1-4 SU on the season and coming off an embarrassing loss to Liberty 38-21. The Orange’s only victory this season was against the same Georgia Tech team that was destroyed by Clemson last week. Simply put, this Syracuse team is not very good, and Clemson will definitely have the capability to cover the spread. I just question the realistic possibility of Clemson covering on Saturday?

Take Syracuse and the points against Clemson

While I have stated Clemson has the best offense in the country since before the first opening game, let’s not get carried away with the outcome from last week’s Georgia Tech game. Clemson culminated one of the best offensive performances of the season last week, but Head Coach Dabo Swinney has never been one to run up the score in any narrative. Before last week’s routing over Georgia Tech, Clemson’s highest point total of the season was 49 points against the Citadel. Syracuse has actually performed relatively well, for a 1-4 SU team, against the pass this season, allowing just 232 yards per game. Obviously, Clemson has more ways to move the football than through the air as running back Travis Etienne is a phenomenal talent. However, Clemson’s elite scoring production is usually when the passing attack is making big plays. I would not be surprised to see that production limited this Saturday, and if we get the slightest bit of help from Syracuse’s offense, this point spread will be extremely difficult to cover for Clemson.

Jay’s Pick to Cover the Point Spread: I think there is a ton of value in the points in this game. Obviously, Clemson has the talent and potential to cover this spread, but the realistic likelihood is lower than most would expect. The Orange are 4-2 ATS in the last six meetings against Clemson, and I think that trend will continue on Saturday. If we can just get a little help from Syracuse’s offense, I feel like this will be an easy cover. Take Syracuse +46. Bet your Week 8 college football predictions FREE by scoring a 100% REAL CASH bonus on your first deposit of $100 to $300 at MyBookie Sportsbook! These guys are quickly becoming the players favorite as they offer sporadic bets such as a team that is favored, getting like +45 lol. Fun stuff and their way of saying thank you for being a customer. Click here to sign up and start reaping the benefits of playing at a better book!