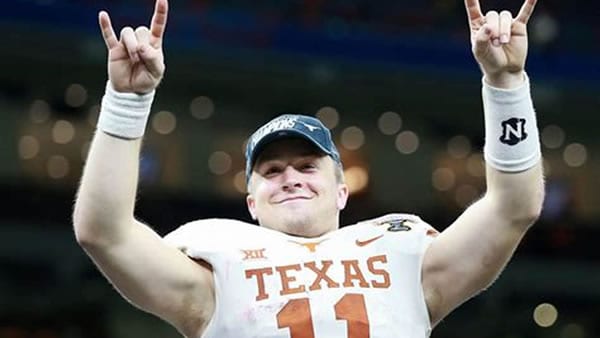 Point Spread: BAYLOR +9 / TEX -9 (Bovada - So much to like! 50% bonus up to $250 free, best live betting platform, rebates on ALL your action win, lose or draw, sweet wagering menu, your credit card will work there for deposits, fast no-hassle payouts!)

Takeaways From When The Bears and Longhorns Were Last In Action

The Bears step into this game on three-weeks rest after seeing last week’s match-up with Oklahoma State re-scheduled due to an outbreak of COVID-19. When we last saw Baylor on the gridiron, they were defeated by West Virginia in overtime when they traveled to Morgantown and closed as a one-point favorite. BU lost 27-21 overall.

The Longhorns step into this game on a low note after it fell in heart-breaking fashion in its rivalry clash with the Oklahoma Sooners in the annual Red River Showdown. Four overtimes were required to determine a winner, but the Longhorns came up short in a 53-45 loss that saw it also fail to produce a cover as a three-point underdog. Texas had rallied from a double-digit deficit to force extra time only to fall in the end.

How the Public is Betting the Baylor-Texas Game

The Horns opened as a 10.5-point underdog but very rapidly moved to an 11-point choice now down to -9. Despite this, 67% of the consensus presently like the Bears here with the points.

Baylor owns the most recent win between both parties when both teams met in 2019 in Waco. Baylor defeated Texas 24-10 and cashed easily as a 3.5-point favorite. The victory for the Bears ended a four-game Texas winning streak against Baylor.

This Bears overall have been a cash-cow in this series as of late as they have covered in seven of the last ten fixtures between these two Big 12 rivals. In Austin, mainly, the Bears have been a profitable venture covering the number in six of their last seven meetings on Texas’ pitch.

The biggest concern without question is the status of Baylor’s depth chart come Saturday, albeit this is a team that had a significant breakout of COVID-19 that spread within its players and coaching staff. However, the scenario won’t be determined until game day itself.

Situationally speaking, this is perhaps the best time to back the Longhorns in a long while. First, there is the stock of Texas itself, which undoubtedly fell through the floor after it lost against Oklahoma in the Red River Rivalry. The Burnt Orange as a whole do not have a reputable win to their name, season-to-date. Sure, the Horns walloped UTEP in its season opener, but even then, many were reluctant to spot the Miners 45 points, even if UT won 52-3. Since then? Texas won a game it could have easily lost in overtime at Texas Tech (despite laying 17.5 to the Red Raiders), were upset outright by TCU in Austin priced at an identical number, and then, of course, the loss against Oklahoma in Dallas, last week. When Baylor’s overall profitability in this series and in Austin for that matter is inserted into the equation, the Bears look like a slice of pie here with the enhanced allotment of points. However, if anything, I would argue that Texas is likely laying a lower number than it should as of result of all of the aforementioned ingredients.

I know it may seem like a perilous notion to entrust the Longhorns with this kind of lumber, albeit they had to rally from two double-digit deficits down to force extra time against both Texas Tech and Oklahoma. In essence, should Baylor score a touchdown first, we now are essentially working with an 18-point handicap. I get it. Nevertheless, in the two games, Baylor has played this year, there is nothing ostensible that would suggest that the Bears can compete with the Longhorns. The Bears beat up on Kansas in their season opener, but that is not saying much since KU hasn’t won a game yet this season. Following this up with the result in West Virginia, it could easily be argued that the Mountaineers should have routed the Bears but simply played down to the level of their competition. Texas, who is hungry to dispel the murmurs after losing to Oklahoma in grisly fashion, will be primed to make a statement against another in-state rival who very much made their presence felt in 2019. Lay the points; Texas should win this by at least two touchdowns. Note: USA players are no longer able to bet at 5Dimes. Many are bitter about losing their about losing their ability to bet on games at reduced odds. Many of those bettors are not aware that there are still online sportsbooks offering reduced juice betting! You can still bet on sides and totals at -105 odds at BetAnySports! Same wagering menu, same great odds! Click here to sign up now and start saving big money! You’ll be so glad you did!