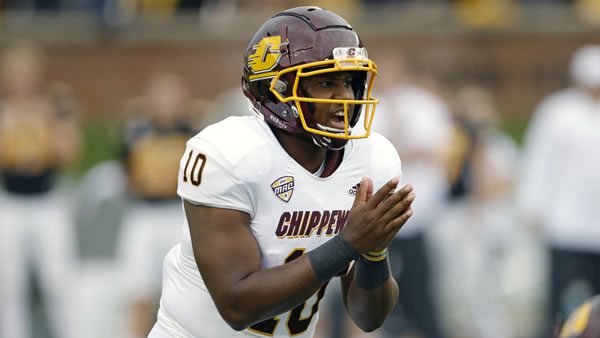 Will Buffalo be angry or disappointed after getting ripped by Ohio last week? The Bulls came to their jinx building and left with yet another defeat at the hands of the Bobcats, falling to 1-11 all-time against Ohio. They haven’t had anywhere near as many problems with Central Michigan, as they’ve won two straight in the series and have far more to play for than the Chippewas do. A win would make Buffalo bowl-eligible, as well as keep the pressure on Ohio to keep winning. One Bobcat slip would put the Bulls right back in the lead in the Eastern Division, as they own the tiebreaker with Bowling Green.

Central Michigan has its backs to the wall after what was supposed to be a special season in Mount Pleasant. For whatever reason, the Chippewas just have not clicked this season. To be fair, they faced what turned out to be a brutal non-conference slate, as Oklahoma State and Penn State were unwinnable, and South Alabama turned out to be one of the best teams in the Sun Belt. But they should have beaten Ball State at home, and they absolutely gift-wrapped the game against Bowling Green. Discipline is a big reason that Jim McElwain’s team is in a must-win situation: the Chippewas commit the third-most penalties in the MAC, and they’re dead last in the nation in turnover margin at minus-13.

How the Public is Betting the Buffalo/Central Michigan Game

Money has come in on Central, despite the Chippewas’ home struggles. 60% of tickets are on Buffalo, but the line has jumped from Buffalo -1 to CMU -1.5. The total has fallen to 54.5 from 55.

Buffalo’s run game has to be better than it was against Ohio, or else the Bulls are going to have to try something different. The Bobcats stopped Buffalo cold on the ground last week, and Central Michigan also boasts a solid ground defense as one of its strengths. That’s usually fine with the Bulls, who prefer to pass with Cole Snyder, but Snyder played poorly last week and backed the Bulls into a corner with an early interception that left Buffalo with too big of a margin to make up.

Unlike past Buffalo teams, this one is blessed with good wide receivers, as Justin Marshall and Quian Williams give Snyder some reliable targets to work with. Ron Cook is equally effective catching passes out of the backfield or running the ball, and the Bulls will likely use him to try to force the Chippewas away from the run. The biggest key will be avoiding an early hole, as CMU has been at its best in the first quarter, and Buffalo really doesn’t want to have to try to come from behind again.

Daniel Richardson and Lew Nichols were supposed to pick up where they left off in 2021, but that has not happened in 2022. Richardson hasn’t been that big of an issue, as he’s still a fairly accurate passer, but Nichols has not had a strong season. His yards per carry is down to just 3.5, and he lost two fumbles against Northern Illinois. That didn’t cost them in that game, but the Chippewas have really struggled to hang on to the football in 2022. They’ve lost 16 fumbles, the worst in the nation, and they’ve managed a minus-13 in turnovers.

When the Chippewas hang on to the football, they’re a powerful offense that is capable of scoring a lot of points in a hurry. When they don’t, they’re fairly easy to stop because they will often stop themselves. The offensive line simply hasn’t done its job this season, and the amount of penalties from this team has made them a very risky bet.

November MACtion has proven to be tough sledding for Buffalo, as the Bulls have gone 0-4 ATS in their past four games in the final month of the regular season. They’re also not a team that responds particularly well to adversity, as they have gone 1-7-1 ATS in their past nine games that followed a straight-up loss.

Meanwhile, Central Michigan has tended to play its best in November, covering in 35 of their last 54 games in November and going 14-1-1 ATS in their past 16 games on Wednesdays. But MACtion might not work out for them this year; they have just one cover in their past five league games.

It should be a calm, if chilly, day in central Michigan. Temperatures should sit in the mid-40s, with winds blowing at seven miles per hour to the south-southwest. No precipitation is in the forecast.

Central Michigan has plenty of talent but virtually zero discipline. Buffalo has much more discipline and features a talented roster, plus it has more on the line. There’s little to suggest that Central Michigan puts it all together here after disappointing all season. Give me the Bulls. Check out this SWEET offer! Get a 125% REAL CASH bonus up to $400 and get a FREE HALF POINT every time you bet your favorite NFL, college football, NBA and college basketball team! Get all this plus a sweet player rewareds program by signing up and entering bonus promo code PREDICTEM at GTBets Sportsbook! They’ve been with us for over 10 years with ZERO complaints!