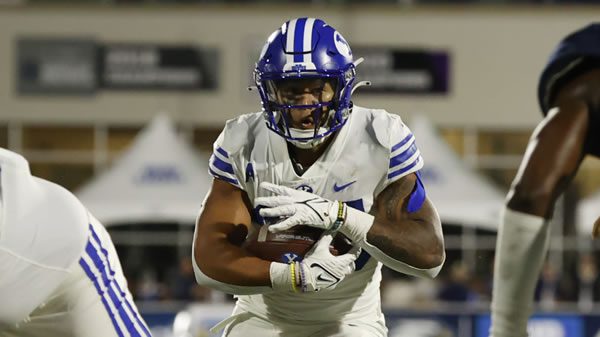 Point Spread: BYU -6.5/USC +6.5 (Bovada - Absolute BEST live betting platform on the web! Check it out You receive a 50% bonus on your first deposit too + rebates on ALL wagers!)

The BYU Cougars take on the USC Trojans at the Coliseum on Saturday. BYU will be vying for their tenth win of the season, another successful year for the Cougars, with a 20-3 W-L record dating back to 2020. They conclude their regular season and try to position for a better bowl spot in a tough road spot against the USC Trojans. The Trojans took another lump on Saturday, coming out on the short end of a 62-33 loss in their rivalry game with the UCLA Bruins. It was their fourth loss in five games, as the Trojans continued to slide into oblivion at the end of the season. Who can cover the number at the Coliseum on Saturday?

BYU: The More “Together” Team

Other than a midseason two-game slump where they took losses to Boise State and Baylor, it has been smooth-sailing for the Cougars. They’ve scored wins over multiple ranked teams, ride a four-game win streak, and haven’t seen an opponent come within 17 points of them in a month. All in all, they have surpassed expectations in a season where more of a rebuilding-type year was projected. Beyond the X’s and O’s is the fact that you have a team grounded in a singular mission, and for the last two seasons, the metamorphosis to the program has taken hold through will.

On the other sideline is a USC team that has fallen off a cliff after having high hopes in the early season. Before long, their coach was canned, and most key contributors went down with injuries. Beyond the respective quality of the individual pieces that make up each team, there is a lot to be said for overall morale and togetherness. In that regard, the edge for Brigham Young just from a team-cohesion standpoint might be too much for a tipped-over team like USC to manage.

Bad Spot for the Trojans

For a Trojans’ team that might be waiting for the end of the season to come mercifully, they need a specialized set of conditions in which to thrive. And lately, that has been against the worst of the conference. Despite a long run of non-covers and embarrassing losses for a proud program, they can still hang in there with teams like Arizona and Colorado. Otherwise, it has been a real grind, with nary an iota of resistance in games against Stanford, Oregon State. Utah, Notre Dame, Arizona State, and Utah. So why would they suddenly jump up and manage to be a thorn in the side of one of the more-consistent programs over the last few seasons?

We have started to see opposing offenses putting up absurd levels of production against USC. In their last five games, they’ve allowed 200 points, and this is not exclusively versus top conference offenses, either. Even Stanford and Arizona are having field days against this group. And it’s not all their fault, as not many teams could soldier through all the upheaval, failure, and injuries. But however, we ended up getting to this point; It’s been a sobering season for the Trojans, their fans, and especially those who have backed them at the betting window over the last few months.

For the Trojans’ defense, they can be victimized through the air and on the ground. In recent games against UCLA and Arizona State, they’ve been giving up a large amount of big running plays, a bad recipe when preparing to take on BYU, a team that has been laying it on super-thick with the run-game as of late. Even someone liking USC in this spot has to bristle at the thought of their “D” taking on a BYU group that has gone for 160 points in their last three games. Coming off a game where they gave up 62 to UCLA, what can they realistically hope to keep the Cougars to this week?

Any Hope for the Trojans?

At this point, we’re looking at slim pickings. They are USC, and that alone carries a certain power, at least a sneaking feeling that all that talent can somehow congeal and put together a nice performance to end a rotten season. It seems like there’s at least a small chance Kedon Slovis could be in there, giving them a little more X-factor appeal, perhaps. BYU is a little out of their stomping grounds in LA and might be getting run a bit ragged after playing Georgia Southern on the road last week. For all of BYU’s success this season, a 5-6 ATS record shows they don’t always thrive in the role of favorite, with some closer-than-expected games along the way. For however an advantageous spot this is, the Cougars managing just one cover on the road this season elicits concern.

Despite some drawbacks to playing BYU as a favorite this season, it seems like the Trojans represent a doable task this week. We see the numbers mostly way off for the Trojans over the last few months, with Southern Cal missing spreads by monumental amounts. BYU hasn’t been a powerhouse from a betting sense, perhaps, but they have something to play for and are facing a team in the midst of a demoralizing spiral. That equation doesn’t always shake out for the favorite as planned, but I think it will in this case. I’m taking BYU.

Loot’s Pick to Cover the Point Spread: I’m betting on the Brigham Young Cougars minus 6.5 points. Bankroll running low? Get a FAT boost (double your deposit) with a 100% real cash bonus at GTBets Sportsbook! They have an awesome rewards program too!