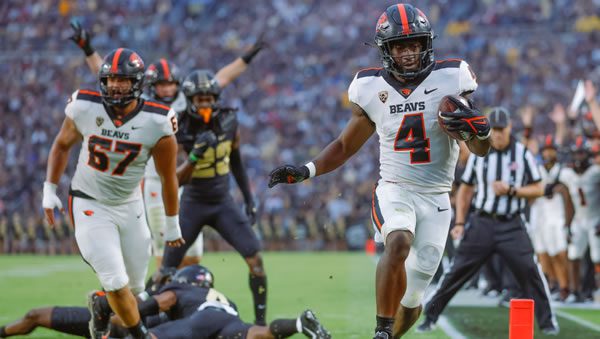 The Oregon State Beavers take on the Oregon Ducks on Saturday in a long-standing in-state rivalry that dates back 128 years. This annual meeting, known as the “Civil War,” has been dominated in recent years by the Ducks, but the Beavers have been surging the last several seasons, winning two of the last five, including last season in a 41-38 win in Corvallis. This season it will be in Eugene. Who can get the upper hand this time around?

The Shifting Fortunes of the Ducks and Beavers

With some big things lying ahead, the Ducks not only lost, but were battered by Utah in Salt Lake City, 38-7, on Saturday. The College Football Playoff is out. They land in this spot with a thud. And sure, out of the three teams that can still win the North division, Oregon is in the best spot with win-and-in scenario that would give them a chance to rematch with Utah, who clinched the South division with the win over the Ducks on Saturday.

Oregon State hung in there nicely this season, overcoming some rough sequences to finish strongly with wins over Stanford and then last week with the big win over Arizona State. With a win over Oregon this week and a Washington State loss to Washington in the Apple Cup next week, they’d book an unlikely ticket to the Pac-12 Championship Game. Among their season highlights are beating the very team that beat Oregon last week with their late-October win over Utah. They were cooled down in hard-to-explain losses to Cal and Colorado, but I’d look for the Beavers to be enlivened after clawing back into the picture, even if they need a lot to go right to get to the title game.

Better Spot for the Beavers?

In terms of having the better season, the Beavers can’t compete with the Ducks in the category of overall success. But this is a spot where they generally produce a high-energy effort. It’s one of those rivalry games where the storylines leading up to the game often carry less weight than what you would think. The favorite often isn’t as much of a favorite as one would assume, as can be typical with this kinds of college rivalries.

Before last week, the Ducks were entertaining possibilities of making a national splash. Utah put a stop to that. So they don’t really have anything super-special on the table anymore. It’s just a hard spot to spin out of for the Ducks. To get manhandled like that by Utah with everything on the line makes it difficult to project that you’ll see a vintage Ducks squad in this spot even with the division on the line. You’d think they are at least smarting a little bit from that. With the departure of Mycah Pittman and injuries to Jaylon Redd and Johnny Johnson III., they are suddenly down three of their top five receivers. It’s like the wheels just came off at the wrong time for the Ducks.

Accounting for Each Team’s Headspace

There is always something to be said for when one team arrives in a spot with a bit of a spike, as opposed to a team that lands in a spot crestfallen and dejected. A few weeks ago, Oregon State would never have imagined they’d be in a spot to possibly make it to the conference title game. That can give a team life. But I’d hesitate in marking Oregon as a team that will fold up its tent and go home upon the realization that their College Football Playoff hopes are dashed. Being the Pac-12 champion and having a chance to beat the team that ruined their chances at a historic season might just be proper motivation enough.

Looking for Better this Week

The Ducks are back at home this week, not playing in the toughest road-spot in the conference this season like they were last week. They’re not going against a dynamic defense as they were last week. Some things elicit concern, like how Utah took it to Oregon with the ground-game, something Oregon State can do to good effect with BJ Baylor and his supporting cast of backs. But Oregon had been pretty good in that area until running into the Utes last week, so maybe they can curtail that. If anything, Oregon’s pass-defense had been their Achilles heel this season and that’s not really the Beavers’ M.O. on offense.

Maybe the type of all-around balance that the Utes brought to the table last week, in addition to the difficult road-spot where the Utes are typically better, was just the right combination to throw Oregon off their best game. Oregon St. can certainly trouble any team with their ground-game, but they lack the other components that would normally stand up well against a strong team like Oregon, namely no passing game or real ability to stop the pass, along with a non-impactful defense that is not among the strongest the Ducks have seen this season.

There are similarities to last season when the Beavers caught a demoralized Ducks team in the “Civil War” and scored the win. And even an ardent Ducks’ backer will be on pins and needles at the beginning of this game hoping to see a fired-up Ducks’ team. One can expect a fired-up underdog Oregon State squad this week, so the Ducks will need to match that, not a guarantee after last week. But I see the Ducks still being able to stop the bleeding, winning this game and getting the cover, as they set their sights on Utah in the title game. I’ll take the Ducks.

Loot’s Pick to Cover the Point Spread: I’m betting on the Oregon Ducks minus 7 points. Note: Be sure to check out our Week 12 NFL Predictions!