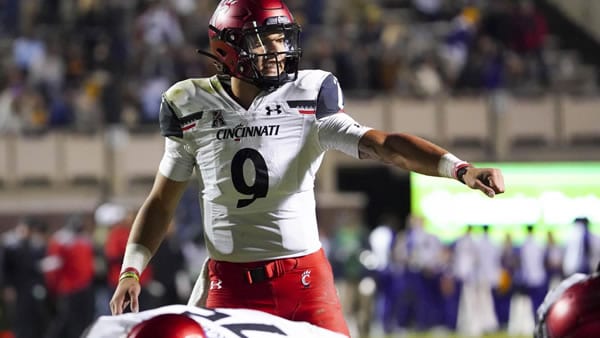 In many ways, the Georgia Bulldogs 2020 campaign will be viewed as a disappointment. Head Coach Kirby Smart has raised the bar for expectations in Athens with three straight SEC Championship appearances prior to the season. The Bulldogs fell one game shy of another SEC Title appearance thanks mainly to their loss to Florida at the midway point in the season. In reality, the Bulldogs still had a successful season. At 7-2 SU, the Bulldogs overcame significant losses in last year’s NFL Draft and have a strong foundation of talent to build around going into the offseason. Before the Bulldogs put the final bow on the 2020 campaign, they will get the opportunity to put one final feather in their cap when they clash with the Cincinnati Bearcats in the Chick-Fil-A Peach Bowl on New Year’s Day!

The Bearcats are among just five teams that remain unbeaten this year at the FBS level joining the likes of Alabama, Ohio State, Coastal Carolina, and San Jose State. Largely untested into the final two games of the season, the Bearcats won the American Athletic Championship thanks to a 27-24 victory over Tulsa. Despite the 9-0 SU record, the Bearcats were disrespected by pollsters for the majority of the season as voters cited the strength of schedule as the reason they should not be in the College Football Playoffs discussion. While I tend to agree with that argument, I also believe Cincinnati received an extremely advantageous pairing in this year’s bowl match-up where they can cap the season off with a statement victory against one of the nation’s most prestigious programs.

The reason I really like this Chick-Fil-A Peach Bowl match-up is the stylistic differences of both teams. The Bulldogs are a physical run-heavy offense that will try to beat you between the tackles by controlling the line of scrimmage. Meanwhile, Cincinnati produces your prototype spread offense with RPO options with the goal of creating space for opportunities down the field. When both teams meet inside Mercedes-Benz Stadium, Georgia will have the clear size and strength advantage along the trenches. However, the Bulldogs are not exactly an elite scoring threat due to their limitations to attack the field vertically.

Meanwhile, the Bearcats have an underrated defense that should be able to challenge Georgia’s physicality. I’m not sure if they can win that challenge, but I don’t expect the Bulldogs to have huge success either. Offensively, I believe the Bearcats can find ways to keep the pressure on Georgia’s defense over the course of 60 minutes of play. QB Desmond Ridder is a legitimate dual-threat passer. Ridder has completed north of 65% passing and ranks 2nd on the team with 609 rushing yards. The Bearcats quarterback has rushed for 12 touchdowns, which was the most in the AAC this season. Needless to say, Riddler’s ability to make plays and keep drives alive is exactly what Cincinnati needs in this match-up where scoring opportunities could be limited.

Georgia “Opt Out” list growing ahead of Peach Bowl

One of the hot topics that always encompasses bowl games in today’s era of college football is that it has become common for players to “opt-out” of their final games to prepare for the NFL Draft or other opportunities. Obviously, this factor typically hits the top programs hard, and that is the case for the Bulldogs going into this year’s Peach Bowl. The Bulldogs are currently up to 8 players that have elected to “opt-out” of this year’s postseason battle with the Bearcats. Among those eight players includes 3 of the team’s former captains in OL Ben Cleveland, LB Monty Rice, and DB Richard LeCounte. The list of opt-outs will especially be felt on the defensive side of the ball with the losses of Rice, LeCounte, DB Eric Stokes, and DB DJ Daniel. More importantly, there is a chance the list could continue to increase closer to game time, which only gives more reason to like the Bearcats’ chances of pulling off the upset.

Jay’s Pick to Cover the Point Spread: Cincinnati +7. Bet your Bowl game picks FREE by taking advantage of a 100% REAL CASH bonus on your first deposit of $100 to $300 at MyBookie! (Must use bonus code PREDICT100 to get the additional funds credited!)