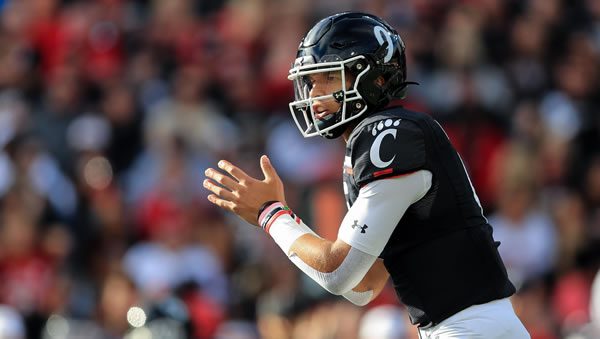 Was the game with Navy an aberration or an alarm bell? The Bearcats played well enough to win the game comfortably against the Midshipmen, but they didn’t come close to a cover, only winning by seven points when Navy ran out of time for a comeback. Cincinnati still moved closer to the playoff thanks to being one of the only unbeaten teams left in the nation (and one of the others, Oklahoma, needing a strong fourth quarter to survive against Kansas), and the Bearcats might well have an easier time against a Tulane squad that appears ready to get this season over with.

Tulane’s already slim bowl hopes would be over with a loss to the Bearcats, and there’s little to suggest that the Green Wave can overcome the problems they’ve shown this season, especially if quarterback Michael Pratt is on the shelf for this game. The Navy game was probably the worst thing that could have happened to the Wave because it got Cincinnati’s attention and likely means the Bearcats will roll into New Orleans focused on the job at hand. If Tulane isn’t able to get the offense working and possibly put up some early points in this one, it’s likely the Wave absorb another crushing loss.

How the Public is Betting the Cincinnati/Tulane Game

The public is high on Cincinnati, as 75 percent of tickets have come in on the Bearcats and the line has ticked up half a point to favor Cincinnati by 24.5. The total has dropped a point, falling from 63 to 62.

This has to be a huge game for Desmond Ridder, in large part because Cincinnati wants to push him to win individual awards, and that’s only going to happen if Ritter uses the final five regular season games to impress people. The Cincinnati quarterback didn’t do a lot against Navy, as the Bearcats looked off, and he’ll be looking to get back on track with Josh Whyle in this one.

Jerome Ford should also be looking to bounce back here, as he ran the ball decently but not great against the Midshipmen. Tulane’s defense has been shredded all season long, and the Green Wave have given up at least 40 points in all three of their league games to this point in 2021. The Wave give up nearly 500 yards of offense per game, so this is more of a question of what Cincinnati wants to do when it has the ball. If the Bearcats believe they need to get Ridder throwing the ball, look for them to do exactly that and crack the over by the end of the third quarter. If they’d rather get the job done with Ford, the over might not cash, but the Bearcats should be able to exploit Tulane’s weak run defense.

If Michael Pratt can play, the Tulane offense gets a little more dangerous. If he can’t, it’s going to be very difficult for the Wave to get much of anything going. Tulane doesn’t have a great run game, as Cameron Carroll and Tyjae Spears have just five touchdowns combined this season and have just 109 rushing attempts between them in seven games. The ground game can move the ball when Tulane can commit to it, but usually, the Wave has to abandon the run because their defense hasn’t been able to stop anyone and they’ve got no choice but to try to outscore the opposition.

Pratt has done a decent job of keeping Tulane in games, as he’s thrown for 16 touchdowns against just five interceptions. But it hasn’t been easy, as he’s throwing 30 or more times per game on a fairly regular basis. If that continues, it’s only a matter of time before a mistake or two occurs, and making a mistake against this Cincinnati defense is disastrous.

The defensive issues have made Tulane a strong over team, as the Wave has played over in seven of its past eight contests. That’s a good match for Cincinnati, which has gone over in five of six games in the American.

If nothing else, it should be a great day weather-wise in New Orleans, as temperatures will hit 70 degrees at kickoff and winds will be a mild nine miles per hour blowing to the west-northwest.

Dan’s Prediction to Cover the Spread

Tulane can’t stop anybody right now, and that’s trouble when going up against the likes of Cincinnati. The Bearcats should be anxious to get out and get the offense rolling after struggling to get past Navy, and Tulane’s lacking defense should be a perfect foil for the Bearcats in this one.

Cincinnati might come close to the total by itself. Give me the Bearcats here. Bankroll running low? Did you know that you can bag a 100% real cash bonus on your first deposit up to $500 at GTBets Sportsbook? They have an awesome rewards program too!