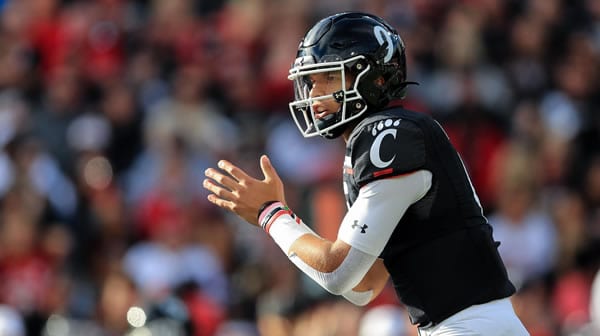 While one team has been sitting around waiting to play, the other probably wishes that it had been. SMU is off to a 5-0 start, but injury concerns have really put a damper on the Mustangs’ brilliant start. So far, they’ve survived losing their top running back and top receiver, but the schedule gets a lot more difficult than it did in that first game. The Mustangs barely survived at Tulane, and they’ve now got perhaps the most talented team in the American coming to Dallas.

However, Cincinnati comes off three weeks of inactivity, as the Bearcats had to postpone their game against Tulsa because of fears of a COVID outbreak in their locker room. Cincinnati has increased testing and hasn’t had any further instances of the virus showing up. The Bearcats now get their first crack at a quality conference opponent after opening up with a breather against South Florida. This also marks the start of a gauntlet for Cincinnati, as four of their next five contests will be against the top teams in the conference and their biggest threats against winning the league title that eluded them a season ago. Can they raise their game enough to get a win in their first road test of the year?

How the Public is Betting the Cincinnati/SMU Game

The line has swung completely to the opposite side from its opening, going from Cincinnati -1 to SMU -2.5. The total has actually dropped as part of that, falling to 56.5 from 57.5.

The main question for Cincinnati going into this game is, can the Bearcats run the ball well enough to win? The way you beat SMU is by running the ball and running it consistently, something that Tulane could do quite well in their overtime loss against the Mustangs. But Tulane is a team that’s built around its ability to move the ball on the ground, and Cincinnati hasn’t really shown that it can do that this season. Part of that can be explained by the fact that they played an Army team known for its strong defense, but South Florida is definitely not known for its defense, and Cincinnati still didn’t put up big numbers on the Bulls.

Instead, Cincinnati is a pass-first offense under the leadership of Desmond Ridder, which could prove to be a problem. Ridder wasn’t great against South Florida, tossing three interceptions in the win, and if the Bearcats’ defense hadn’t been so strong, Cincinnati very likely would have lost that game. In order to get a win here, Ridder either has to make better decisions with the football or make good decisions without the football and hand the ball to Gerrid Doaks and Charles McClelland. If those two aren’t moving it, it’s going to be very difficult for Cincinnati to get anything going.

The Mustangs didn’t do a great job running the ball against Tulane, but when you have a passer like Shane Buchele, you don’t have to be great on the ground. Buchele threw for 384 yards against the Green Wave, and SMU didn’t even seem to notice that Reggie Roberson wasn’t around. But part of that was because Tulane has a rather weak pass defense, and SMU was able to do whatever it wanted through the air. That’s probably not going to happen against Cincinnati, which has completely shut down both FBS opponents that it’s faced this season.

The key for the Mustangs will be to stretch out their drives and make sure that they don’t panic if their first two or three drives don’t end up going for points. SMU is used to scoring and scoring quickly, but this will be the best defense the Mustangs have faced all season and a team that knows them reasonably well. In four meetings all-time with Cincinnati, the Mustangs have only cracked 25 points once — in the game, they won in 2017. This is much more likely to be a game where SMU has to grind things out in order to get a win, and that’s not really the way they play.

Three of the four matchups between these teams have been close games, with the lone exception being a 41-3 rout by the Bearcats in the teams’ first meeting in Dallas. They’ve also been fairly low-scoring affairs, as three of four have resulted in 53 points or less. For Cincinnati, that’s just par for the course, as their past six games inside the American have gone to the under. SMU typically plays higher-scoring affairs, but in October, the Mustangs have had to adjust to playing slower, hitting the over just three times in their past 11 games in the year’s 10th month. In fact, the over has never once hit in this series, even in the 59-point contest that SMU won in 2017.

As for the line, Cincinnati is a team that tends to play up to its competition and meets the moment. The Bearcats are 5-1 ATS against opponents with a winning record, which they haven’t seen yet this season. SMU has done well at home, covering the number in four of five home games, but the Mustangs have to get better against American foes, as they’ve failed to cover the number in five of their past seven.

Late-night games in Dallas are usually perfect for football, and this will be no exception. Temperatures are set to hit 69 degrees, with partly cloudy skies.

This game will be decided by which side wins the battle: SMU’s offense or Cincinnati’s defense. If the Bearcats can keep the Mustangs from scoring early, they’ll control the game and keep the pace much slower, which would play into their hands perfectly. However, if SMU gets off to a hot start, the Mustangs will force the Bearcats to find a way to attack, which isn’t really where Cincinnati wants this game to be.

Defense has ruled the day so far in this series, and I expect that’s going to continue moving forward. If SMU were fully healthy, I’d like their chances, but I’ve got to take the Bearcats and the points. Bet your Week 8 college football picks FREE by scoring a FAT 100% real cash bonus on your first deposit of $100 to $1000 at BetNow Sportsbook! This is the best bonus we’ve ever seen from a legit sportsbook and it’s likely to disappear this week! Click here to get it now!