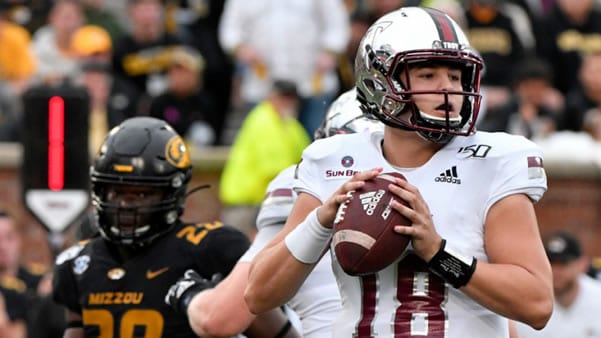 It’s bowl season, and the only bowl to match a pair of conference champions helps kick things off. This one looks like it could be a case of two teams trying to air it out, as both UTSA and Troy feature solid quarterback play and offenses that put up some big numbers in their conference championship games. Frank Harris came up big near the end of the first half to help the Roadrunners put away North Texas, while Gunnar Watson got going early and built a first-half cushion that Coastal Carolina simply could not match. The question here is how well each team can prepare for the other passing offense, as each team tries to deal with explosive offenses in its own way.

On the UTSA side, the Roadrunners haven’t been great at stopping teams, giving up 58 points in their past two victories and allowing 26.5 points per game this season. But UTSA averages 38.7 points per game with its own offense, making it very difficult for C-USA opponents to keep up with them. Troy, on the other hand, has played more than its fair share of defense. The Trojans held their past four opponents to under 20 points, and although Coastal got to 26, the Chanticleers did all of their scoring after Troy had already put the game away. The Chanticleers didn’t score until the lead had already reached 31-0, and from then on, Troy just had to manage the game. That’s not likely to work against UTSA; stopping the Roadrunners’ attack from getting going will be key.

How the Public is Betting the UTSA/Troy Game

When UTSA Has the Ball

If you’re going to beat UTSA, you have to find a way to neutralize Frank Harris. In the games that UTSA lost, one game came down to triple overtime because Houston couldn’t find an answer and only survived in the extra sessions, and one was a rout because Texas kept Harris from taking over the game. The Roadrunners weren’t supposed to beat the Longhorns, and the reason they didn’t was because Harris could only manage 222 yards with no touchdowns and an interception. The closest the Roadrunners came to defeat in C-USA was a 31-28 survival against Western Kentucky, and that was close because Harris only threw for a single touchdown. With 31 scores to his name and three great pass catchers in Zakhari Franklin (1100 yards, 14 touchdowns), Joshua Cephus (87 catches, 985 yards), and De’Corian Clark (741 yards, eight touchdowns), nobody at the Group of 5 level has been able to put a stop to UTSA’s powerful offense all season.

The running game isn’t quite as strong, especially with Brenden Brady banged up, but Kevorian Barnes should be able to gain a few yards here and there. However, Troy’s run defense has played well all season, which suggests that the Roadrunners will mostly try to keep the ball in the air. This likely leads to a fair amount of passing plays, which means the clock is going to stop a fair amount during the Roadrunners’ possessions.

The way that Troy ran the ball against Coastal Carolina needs to happen again. Gunnar Watson has done a fine job operating a pass-first offense, but the Roadrunners score too fast to make that a viable strategy unless the Trojans plan to win the game on the final play. What Troy needs to do is get Kimani Vidal and DK Billingsley going against a rather soft UTSA run defense. Teams don’t often get to test the Roadrunners because they have to give up on the run too early in the game, and Troy’s defense should play well enough to keep that from happening.

When they get carries, Vidal and Billingsley have proven effective, with the former gaining 1,059 yards on the season and both averaging around five yards per carry. Throw in the Johnsons at receiver (Tez and RaJae’), and Troy has more than enough weapons to stay close with UTSA. The key will be making sure their drives take long enough to keep the Roadrunners from being able to wear out their defense. If the Trojans’ offense stays on the field, they have the edge.

Troy tends to make its bowls a show. The over has cashed in eight straight bowls for Troy, even though the Trojans have gone under in 10 of their past 14 non-conference games (basically, every non-conference game outside of bowls for the past three seasons). The Trojans have also done fine work in December (when their bowls are usually played), covering in six straight December contests.

UTSA has never won a bowl game, but the Roadrunners haven’t had many chances to do so. They have played over in 12 of their past 17 and five straight non-conference games, and they’re 4-1 ATS in their past five against the Sun Belt.

Expecting hot temperatures for this game? Think again. This is going to be a rather pleasant day by most standards but chilly by Florida standards. Temperatures will sit at 66 degrees at kickoff, with no rain in the forecast.

The over seems like the best play here. Both teams will try to put up points, and Troy’s not really the run-heavy team you need to be in order to handle UTSA. The Trojans will keep pace, but expecting them to stymie Harris for four quarters is too much. Give me UTSA. Note: We appreciate you finding and reading this article! Did you know that our BEST picks each day are found on our free picks page?