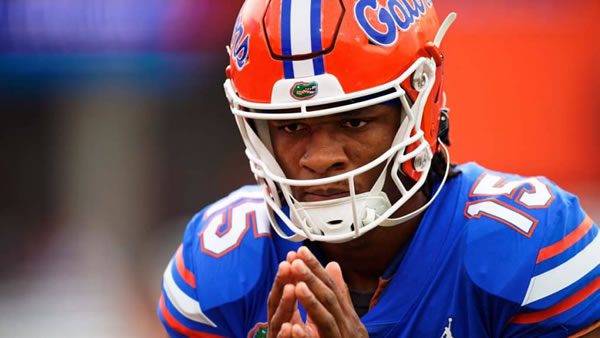 The traditional Third Saturday in September is now the Fourth, and Tennessee’s hoping that a change in dates helps lead to a change in fortunes in what has become one-way traffic. Florida has won 16 of the past 17 meetings with the Volunteers, and most of those matchups haven’t been particularly close. Only one of the past five meetings was decided by single digits, and the Gators have scored at least 26 points on the Volunteers in every year since 2015.

So why is Tennessee the one giving 10.5 points? Simple: the Volunteers have looked excellent to start the season, and Florida has looked pedestrian since upsetting Utah in the opener. The Gators looked like they were back on track after that win over the Utes but got picked off by Kentucky in Week 2 and then nearly got upset by a weak South Florida squad. Now they’re leaving Gainesville for the first time this season to face a Tennessee team that has put up incredible numbers against lesser foes and found a way to win on the road against ACC champion Pittsburgh. With Florida still showing signs of not having all of the pieces in place, Tennessee hasn’t had a better opportunity to beat the Gators since that 2015 win.

How the Public is Betting the Florida/Tennessee Game

This is going to be a sharps vs. public situation, as 60% of the tickets have come in on the Gators. However, the sharps have backed the Volunteers enough to push the line from -9.5 to -10.5 since this game opened. The total has ticked up from 62 to 62.5.

Florida has a serious problem right now: the Gators cannot throw the football. Anthony Richardson might have managed the game well against Utah, but he didn’t toss any touchdown passes and still doesn’t have any on the season. When Richardson can make plays with his legs, as he did against Utah, he’s incredibly dangerous. But against Kentucky, the Wildcats’ defense bottled him up completely and rendered Florida’s offense completely impotent. Once Kentucky stopped Richardson after giving him one short field, the Gators never did anything on offense for the rest of the night, scoring zero second-half points.

The good news is that Florida has run the ball incredibly well, regardless of who’s carrying the football. Montrell Johnson and Trevor Etienne both average better than 7.5 yards per carry, and neither had a problem running the ball last week against South Florida. The bad news is that the only comparable run defense to Tennessee’s that Florida has seen is Kentucky’s, and the Gators couldn’t get the ground game working against the Wildcats either. Johnson did manage to gain 62 yards on seven carries in that game, but Florida didn’t get him in a flow once it fell behind because Kentucky had Richardson stopped cold and forced the Gators to pass. With Tennessee only giving up 83 yards per game on the ground, Florida will have to avoid an early deficit against the Volunteers and open up the run game, or it will have to throw the football to have a chance.

The Volunteers are facing the best pass defense they’ve seen this season — and the worst run defense they’ve seen by a mile. That begs the question as to what Tennessee will do in this game because the one time the Vols met any adversity this season was against Pittsburgh and its ground defense. The Panthers held the Volunteers to a mere 2.6 yards per carry in that matchup, but Tennessee won in overtime anyway because the connection between Hendon Hooker and Cedric Tillman proved too much for Pitt to stop.

Florida has defended the pass very well, but every running game the Gators have faced went through the front seven as if it wasn’t there. Against South Florida, not exactly known for its offensive prowess, the Bulls nearly won the game on the ground by gaining 286 yards on 46 carries. Jaylen Wright is a good back, but Tennessee hasn’t had to rely on him because Hooker, Tillman, and leading touchdown scorer Jalin Hyatt have been so effective in the passing game. In this game, however, Florida has been so inept against the run that Wright might be the key to the Volunteers’ victory if coach Josh Heupel is willing to lean on him.

Former Florida coach Steve Spurrier once famously said that only Gators survive in the Swamp, but these days, you can update that to the Swamp being the only place Gators survive. Florida has been an automatic fade once it gets outside of Gainesville, as the Gators are 0-8 ATS in their past eight true road games, including their most recent trip to Knoxville. Florida has also failed to cover in five straight SEC games, in part because of how badly the Gators crashed down the stretch last year.

Tennessee has also struggled to cover in SEC games, managing just one cover in its past five SEC games. However, this Tennessee team hasn’t seen an SEC opponent, and it has tended to play well in September. The Volunteers are 4-1 ATS in their past five September contests, and this appears to be the best team they’ve had in a while.

It’s going to be on the warm side in east Tennessee, with temperatures hitting 80 degrees at kickoff and wind blowing west-southwest at six miles per hour.

Florida’s win over Utah is looking more like a fluke with each passing week, while Tennessee has looked legitimate every time it’s taken the field. The Volunteers might not be ready to compete with the likes of Georgia or Alabama, but they’ve certainly shown enough to suggest they’re the superior team to Florida.

Unless Richardson learns how to throw the football by 3:30 p.m. on Saturday, I don’t see the Gators keeping up with the Volunteers’ offense. I’m taking Tennessee. Bet your Week 4 NCAA football predictions for FREE by taking advantage of a 100% real cash bonus up to $500 when you use bonus code PREDICTEM on the special offers page at the oldest and most trusted sportsbook on the web: Everygame!