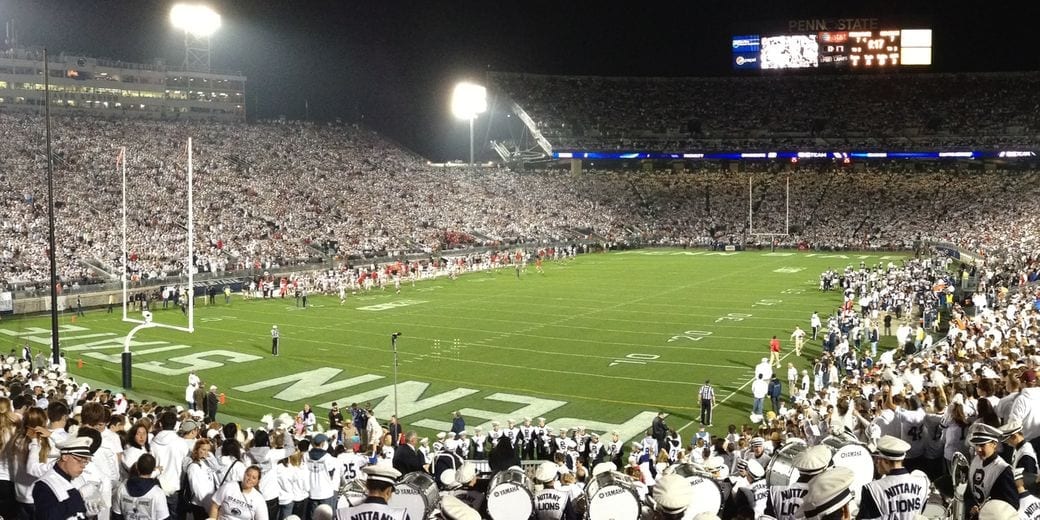 The Hawkeyes emerged in the Top 25 for the first time this season last week and they looked every bit deserving of the designation when they shutout the Maryland Terrapins 23-0 at home in Iowa City. Overall, the Hawkeyes have won their last three games since suffering a heartbreaker of a loss to the visiting Wisconsin Badgers in late September. If there is one thing that can also be deduced about the Black and Yellow is that its defense continues to play better football each week as it held Maryland to a season-low 115 yards of total offense last Saturday. Dominant is the word that describe that effort.

The Nittany Lions continue to be a cardiac team. The last three Penn State results were settled by five points or less. PSU was on the unfortunate side of the first two of those affairs against the favorite to win the B1G, Ohio State when the Lions blew a lead and fell by a point to the Buckeyes. Penn State would follow this up with being the victim of an upset in The Battle for The Land Grant Trophy against Michigan State where Sparty would shock Happy Valley in the last minute of regulation to win 21-17. Penn State most recently took to the road against a feisty Indiana Hoosiers team and escaped Bloomington with a 33-28 win. As a result, for the second week in a row we Penn State fail to cover as a two-possession favorite highlighting their propensity to be overvalued by their namesake alone.

How the Public is Betting the Iowa-Penn State Game

Presently, we have seen 59% of the consensus on Covers like the Hawkeyes but the market has already undergone some line moves to indicate the money is in on PSU. The opening number for this market was -4 in Penn State’s favor but it has now since traveled to -6.5, a notorious underdog-friendly number.

Last year’s encounter between both outfits was a classic. Penn State literally won on the last play of the game at the infamous Kinnick Stadium and broke Iowa hearts when the Hawkeyes thought they had finally ousted one of the conference’s heavyweights. However, Trace McSoreley had other ideas as Penn State won the affair 21-19 on the final tick of regulation. Recently, Penn State has held all the aces in this series. The Nittany Lions have won the previous four meetings between the two teams. This can prone takers to forming a bias based on recent results.

The most notable injury concern for either side in this contest is the availability of Penn State wide receiver Juwan Johnson who has been a go-to target for Nittany Lions Quarterback Trace McSorley. Presently, JJ is dealing with an undefined injury and is sporting a Q-tag heading into Saturday’s contest. While his presence will certainly be an asset to Penn State’s offense, McSorley has plenty of weapons still to distribute the ball to. We’ll get into that in the next section.

Iowa is a defense-first team in nature but since we are highlighting their offensive weapons, their tight ends are the subject of many discussions. The Hawkeyes boast not one but two beasts at this position, Noah Fant and T.J Hockenson. The two lead Iowa’s receiving corps in reception yards (Hockenson has 424 on the year) and touchdowns (Fant has found pay-dirt six times). These guys are a mismatch pretty much anywhere they go. Fant stands at 6’5 250 while Hockenson is 6’5 as well and a mere nine pounds lighter at 241, they will be a problem for PSU on Saturday.

The catalyst of this offense as we have heard his name several times in this article is Trace McSorley but he does have some really good playmakers in the skilled positions. Most notably, KJ Hamlin who has emerged as a vertical threat and the leading receiver for the Nittany Lions this season with 402 yards on the year. There is also Miles Sanders, Penn State’s dynamic tail back who very quickly filled a huge void left by Saquon Barkley. Sanders has rushed for 772 yards on the season and he will get a steady dose of action in an attempt to soften up Iowa’s front seven.

The Hawkeyes are 4-0 ATS in their previous four road games, three of which comprise their present three-game winning streak.

The present forecast for this contest calls for a cold and murky day in Happy Valley. Temperatures are expected to hover around the high 30’s to low 40’s with a 97% chance of precipitation. These conditions will make every yard a fight to get and the play can get quite sloppy.

The number presented alone in this market garners our attention as it is a figure designed to attract action on the favorite. If Penn State wins by a touchdown, takers get a win and thus taking Penn State looks like a shiny apple here. However, as we have stated it is an underdog-friendly number and many teams have pulled outright upsets at this exact number this season. Examples of this, include SMU over Navy, Virginia Tech over Duke, and Arizona State over Michigan State. Iowa looks to be in position to do the same as this is a football team that will be looking to avenge what could have been last year in Kinnick Stadium against this very PSU team. Furthermore, this team knows it could have been undefeated this year and can earn a place in the B1G Conference Championship if it wins out. Penn State however is too focused on White Outs and providing bulletin board material for opponents. Upset is on.