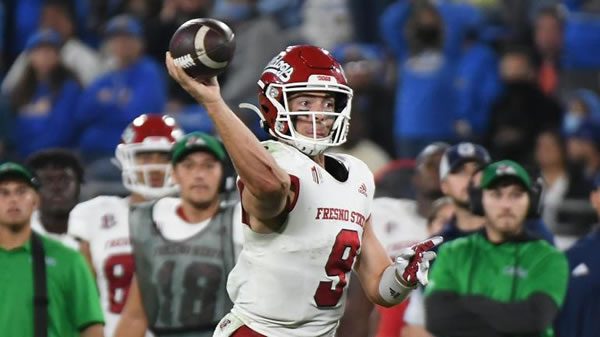 The Fresno State Bulldogs take on the San Jose Spartans in a key Mountain West Conference matchup on Thanksgiving. This Thursday showdown in San Jose carries with it a lot of ramifications. For San Jose, it’s a chance to add a nice nugget to the end of what has been a so-so season and maybe get into the bowl conversation. For Fresno, they can still have a chance at winning the Mountain West Conference west division, so they will be gunning hard for a win this week. In Fresno’s last game, they atoned for a costly loss to Boise the week prior with a 34-7 win over New Mexico. San Jose, meanwhile, dropped their second in a row with a 48-17 loss at home to Utah State. Let’s break it down!

Urgency for the Bulldogs

It has been an eventful season for the Bulldogs, with two wins over ranked teams and an 8-3 record under head coach Kalen DeBoer. They hold a nice win over the only team ahead of them in the San Diego Aztecs. If the Bulldogs can win this one and see the Aztecs lose to Boise, they would go on to the conference championship, where they’d be favorites to win. So that’s what San Jose is going up against this week, not only a team with superior firepower on both sides of the ball but a team with a major agenda, as well.

The Spartans are not at a high-water point entering this game, having been bounced at home by 31 against Utah State in their last game, their fourth loss in their last six. After getting off to a 14-0 start going into the second quarter, Utah State started raining down scores mercilessly. With wins over Southern Utah, Hawaii, New Mexico State, UNLV, and Wyoming, they have yet to notch that really quality win, with all their triumphs coming against conference doormats and other rift-raft. Getting trashed by Western Michigan and Colorado State doesn’t help their profile much, either. San Jose State might just be a little out of their element from what we’ve seen from the Spartans this season.

A waning Spartans defense will be dealing with Fresno State QB Jake Haener, who commandeers one of the more-vital aerial offenses in the country. The receiver package is deep, and they can offset that with some ground game with Ronnie Rivers and Jordan Mims. Between Jalen Cropper, Josh Kelly, Keric Wheatfall, Zane Pope, and the aerial contributions from their backs, Haener has a lot of variety in his offense. Against a Spartans team that can be exploited, a Fresno offense with a lot to play for could conceivably feast in this spot.

Against the kind of balance the Fresno State defense brings to the table, it could be an uphill battle in this spot for San Jose State. The Bulldogs give up an average of 21 points a game against a better median opponent than San Jose. The Spartans average 21 points a game scoring. And nothing against scrappy QB Nick Starkel, RB Tyler Nevens, and WR Derrick Deese, but there is nothing they do well on this side of the ball. Starkel got hurt, and former Nick Nash will close out the season. It’s unclear how much of a difference it really makes. It has only been in very specialized circumstances where the Spartans’ offense has been able to thrive this season. And none of those resembled the spot they’re in this week.

Sources of Hope for the Spartans

It’s not like there isn’t any evidence that the Spartans can’t be solid in this spot. Against two other upper-shelf Mountain West teams, we’ve seen the Spartans hang in there. A few weeks ago against Nevada, the Wolf Pack needed a last-second field goal to nip the Spartans at the wire. Before that, San Diego State had to go to overtime to beat San Jose. So maybe they folded like a house of cards against Utah State last week, but in their other two spots against conference powers, they more than held their own.

With a road game on the 6th of this month, San Jose has been at home this whole time, nice and dug in, while Fresno is having a more back-and-forth action going with their games. Not that this will throw off the Bulldogs, but it’s not uncommon to see teams pushing for something big to fall flat. Playing that urgency card can backfire, as sometimes being loose is better. But in all candor, other than these fanciful notions of home/away, tightness vs. looseness, and San Jose having been tough in a few difficult conference spots, it’s hard to specifically identify concrete hope for the Spartans this week.

This seems a little like a trap. Like it’s almost too easy, and we could see a scrappy Spartans team make this more of a grind than what one might think. The Spartans can be sporadically tough. I just see Fresno as having a little extra edge after still having a chance to be in this despite some recent bobbles. And after everything we’ve seen this season, from the high-quality wins to the near-win over Oregon, this just seems like a weird spot for it to all go flat. I see Fresno St. winning and getting some separation to cover the spread in San Jose. I’ll take the Bulldogs.

Loot’s Pick to Cover the Point Spread: I’m betting on the Fresno State Bulldogs minus 7.5 points. Bet your Thanksgiving Day football picks for FREE by taking advantage of a 100% REAL CASH bonus on your first deposit of $100 to $300 at MyBookie Sportsbook! (Must use bonus code PREDICT100 when signing up).