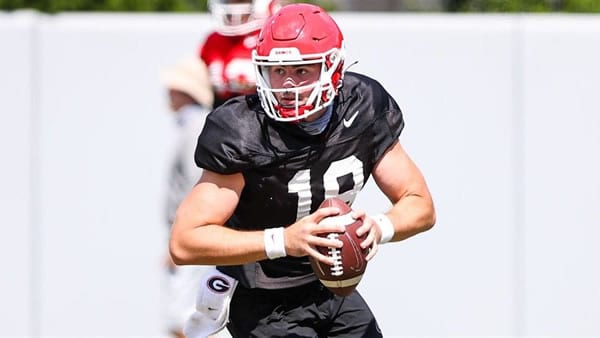 After much anticipation, the SEC will finally kick off the 2020 campaign this weekend when the 4th ranked Georgia Bulldogs visit the Arkansas Razorbacks in a conference opener for both teams. For the last three straight years, Kirby Smart’s Georgia Bulldogs have represented the SEC East in the SEC Championship and have been close to establishing national championship-caliber seasons. The Bulldogs are hoping to put everything together in 2020, but they will have to replace a few huge playmakers on the offensive side of the ball due to the departure of QB Jake Fromm and RB DeAndre Swift. Can Georgia find the playmakers needed for a championship run? We will find out this Saturday as the Bulldogs travel into Fayetteville as 24 point favorites over the Razorbacks.

Just a few weeks ago, Georgia QB Jamie Newman sent the college football world into a tailspin when he announced that he would opt out of the 2020 season due to COVID-19 concerns. Personally, I would never question a player who is looking out for their safety but to turn down an opportunity to be the starting quarterback for one of the biggest powerhouses in the country had to be tough. After Newman’s announcement, most SEC analysts believed that transfer QB JT Daniels would get the nod behind center. Daniels, the former USC Trojans standout, transferred to Georgia over the offseason after losing his starting job when he went down with a season-ending ACL injury last year. However, the most recent news out of Georgia’s headquarters is that the offense will turn to D’Wan Mathis to start against the Razorbacks this Saturday.

To be fair, Georgia has not publicly named a starter, but Mathis appears most deserving coming out of fall practices. While Daniels has the most experience out of the Georgia quarterbacks on the roster, Mathis is an electric player that may provide the offense the extra juice that it needs. The Bulldogs have always been one of the best running teams in the country. Often referred to as “Running Back U,” the Bulldogs have produced the likes of Todd Gurley, Nick Chubb, Sony Michel, and most recently, D’Andre Swift. This year the Bulldogs will look for Zamir White and James Cook to fill that role. However, Mathis has shown promising potential throughout fall practices as an electric runner and capable thrower that could possibly elevate the offense in Jake Fromm’s departure. However, if Mathis’ does not perform early, expect the quarterback controversy carousel to continue with Daniels remaining in the mix.

Expectations for Arkansas in 2020

In a lot of ways, this Saturday’s road trip to Arkansas is a good match-up for Georgia to get this season going. The Razorbacks are on the heels of a 2-10 season that led to Head Coach Chad Morris’s departure. Personally, I thought the hire of Sam Pittman might have been an even worse decision. Pittman does not have any relevant Head Coaching experience, and new OC Kendal Briles has not exactly shown great success in recent years. Last year, Arkansas ranked 111th in the FBS in total offense and averaged just 21 points per game. Those numbers simply will not get the job done in today’s environment, and I have serious doubts the new coaching staff will turn things around.

After having five quarterbacks that combined to throw for just 50% last season, the Razorbacks will get some help in the form of transfer quarterback Felipe Franks from Florida. Franks has never been the most accurate quarterback, but he finds ways to compete by making plays, which is something the Razorbacks did not get from the position last year. Senior running back Rakeem Boyd returns after a 1,100-yard rushing campaign in 2019 to give the Razorbacks two solid centerpieces behind center. However, the remainder of the team is a big question mark. Arkansas does not have the size or depth along the trenches to win many battles against Georgia, especially as it relates to stopping the run. The Razorbacks will likely face a similar uphill challenge against a stingy Bulldogs defense. It’s just a tough match-up all around.

Jay’s Pick to Cover the Point Spread: The Razorbacks ability to cover the 24 points spread simply comes down to the run defense and I don’t think they will have a ton of success. Georgia still has some things to prove, but they are the better betting team in this match-up. Take Georgia -24. Also, don’t forget to see my Week 3 NFL picks!