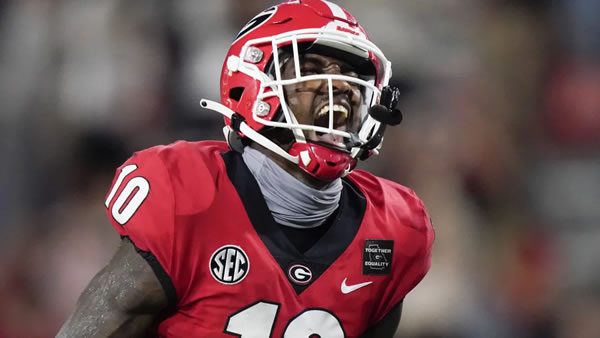 The Trevor Lawrence era is over in Clemson, and the Tigers couldn’t have found themselves much tougher of a first test for their new backfield than Georgia. The Bulldogs believe they’ve got the right man at quarterback now in J.T. Daniels, and they’re ready to pick up where they left off after closing with two blowout wins in their final two games.

Georgia’s big problem under Kirby Smart, however, has been winning the big games. The Bulldogs have done their job against Florida for the most part, winning three of their past four meetings with the Gators, but they’ve continuously struggled against teams that get into the College Football Playoff. Of Georgia’s past five meetings with teams who have played for college football’s biggest prize, the Bulldogs have lost four of them, with the lone exception being a semifinal win against Oklahoma in 2017.
Clemson is at the point where it gets penciled into the CFP every year, thanks to the ACC being Clemson and the 13 dwarves for the past six seasons. Ever since the Tigers dethroned Florida State in 2015, they’ve made the CFP every season, and they’ve gone 39-3 over their past three seasons. Only LSU, Notre Dame and Ohio State managed to get the better of the Tigers since 2017, but that was also with Trevor Lawrence at the helm. Now he’s off to Jacksonville, and Clemson faces a bit of uncertainty for the first time since 2017.

How the Public is Betting the Georgia/Clemson Game

The line has held steady at Clemson -3, but the total has dropped slightly from 51.5 to 51.

The big difference in Georgia’s attack from a year ago is that the Bulldogs actually believe they’ve got a quarterback who can move the ball. Jamie Newman was supposed to be the guy last season, but never actually played a snap for Georgia, while Stetson Bennett couldn’t quite get the job done. Meanwhile, J.T. Daniels was accurate with his passes last season and led Georgia to four straight wins down the stretch, including blowout wins at South Carolina and Missouri.
However, the Bulldogs’ passing attack could be in trouble here, as George Pickens isn’t available to catch passes after tearing his ACL in the spring. Kearis Jackson was the top receiver alongside Pickens, and he’ll need to step up against a Clemson defense that was a little soft against the pass a season ago. So too will Zamir White at running back, although that was the big strength of a Clemson defense that gives up just 3.1 yards per carry.

Whether Clemson is able to get the ball moving against Georgia depends on if D.J. Uiagaleilei is able to step into the starter’s job. Last year, he did the job well enough against Boston College and Notre Dame, as the Tigers overcame a slow start against the Eagles and lost in overtime to an Irish team that ended up in the playoff.

However, he’s missing a lot from last season. The Tigers return just four starters on offense from 2020, and none are at the skill positions. Justyn Ross returns from a neck injury last year, which should help Uiagaleilei get the passing game going, but the Clemson backfield is almost completely devoid of game experience. Freshman Will Shipley takes over in Travis Etienne’s spot after winning the job from Lyn-J Dixon, and he’ll likely find the going rough against a Georgia run defense that gave up a mere 2.4 yards per carry last season. Uiagaleilei is going to have to be on target if the Tigers plan to win this one.

Betting against Kirby Smart in the nonconference has been an excellent way to lose money ever since he arrived in Athens. The Bulldogs are 18-2 in non-conference games since Smart took over, and only one of those has been in the regular season, as the other was a loss to Texas in the 2018 Sugar Bowl. Not only that, but the Bulldogs have won seven consecutive season openers, dating back to 2013.

Of course, the 2013 loss came against Clemson, as the Tigers bested the Bulldogs 38-35 in 2013. But that’s been the only win for the Tigers in this series in the past six meetings, as Georgia has historically dominated this series. That’s a lifetime away for a Clemson program that’s become one of the best in the nation, but what’s not a lifetime away is the Tigers’ recent struggles to cover in the season opener. The Tigers historically get ridiculous lines in the season opener, but they’ve only gone 2-3 ATS in their past five openers. Georgia has covered in four of its past five season openers, with last year’s 37-10 win over Arkansas coming just one point short of the line.

This should be a mostly pleasant day weather wise, but a passing shower could change things. Temperatures are expected to be in the high 70s to low 80s, and as long as the teams avoid the rain, they’ll face ideal conditions for football.

I think Clemson has lost too much to expect to get the cover here. The Tigers are breaking in a new backfield against a team that historically stuffs the run, and their wide receivers don’t have enough experience to make things happen against the Georgia secondary. This should be a good battle, but I think Georgia has a bit too much experience for Clemson. I’ll take the free field goal, but I don’t think I’ll need it in backing the Bulldogs.Kick your football betting season off right by scoring a 100% real cash bonus on your first deposit up to $500 at GTBets Sportsbook!